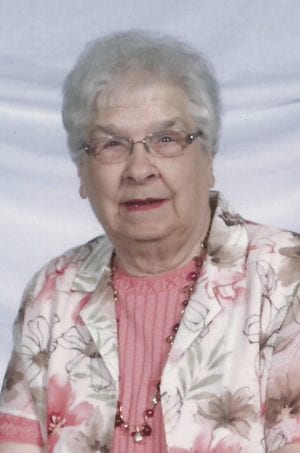 On January 31, 2017, Katherine B. (Maier) Hartman of Perrysburg, the last of eight children born to George and Sarah Maier, left to be with her parents and siblings at the age of 94.

Katherine was born in Toledo, Ohio, attended Spring School and graduated from Woodward High School. Katherine worked as a sealing machine operator for McKay Davis Corporation in Toledo. Katherine joined the U.S. Navy during World War II, and worked as a keypunch operator.

After her discharge from the Navy, she met and married Max Hartman. Katie transitioned from being a city girl to a country girl living on a farm near West Unity, Ohio. Katherine also retired from Kroger’s in Bryan, Ohio. After Max’s death in 2000, she moved to Perrysburg to be near family. Katherine attended Zoar Lutheran Church in Perrysburg.

There will be no visitation for Katherine. Burial will be private at Floral Grove Cemetery, near West Unity. A Memorial service will be held at a later date. Arrangements are under the care of Oberlin-Turnbull Funeral Home, West Unity, Ohio.

Those planning an expression of sympathy are asked to consider memorial contributions be made to North Star Reach Camp, a camp for children with serious health challenges, 1050 Highland Drive, Suite F, Ann Arbor, Michigan 48108. For more information, please visit northstarreach.org