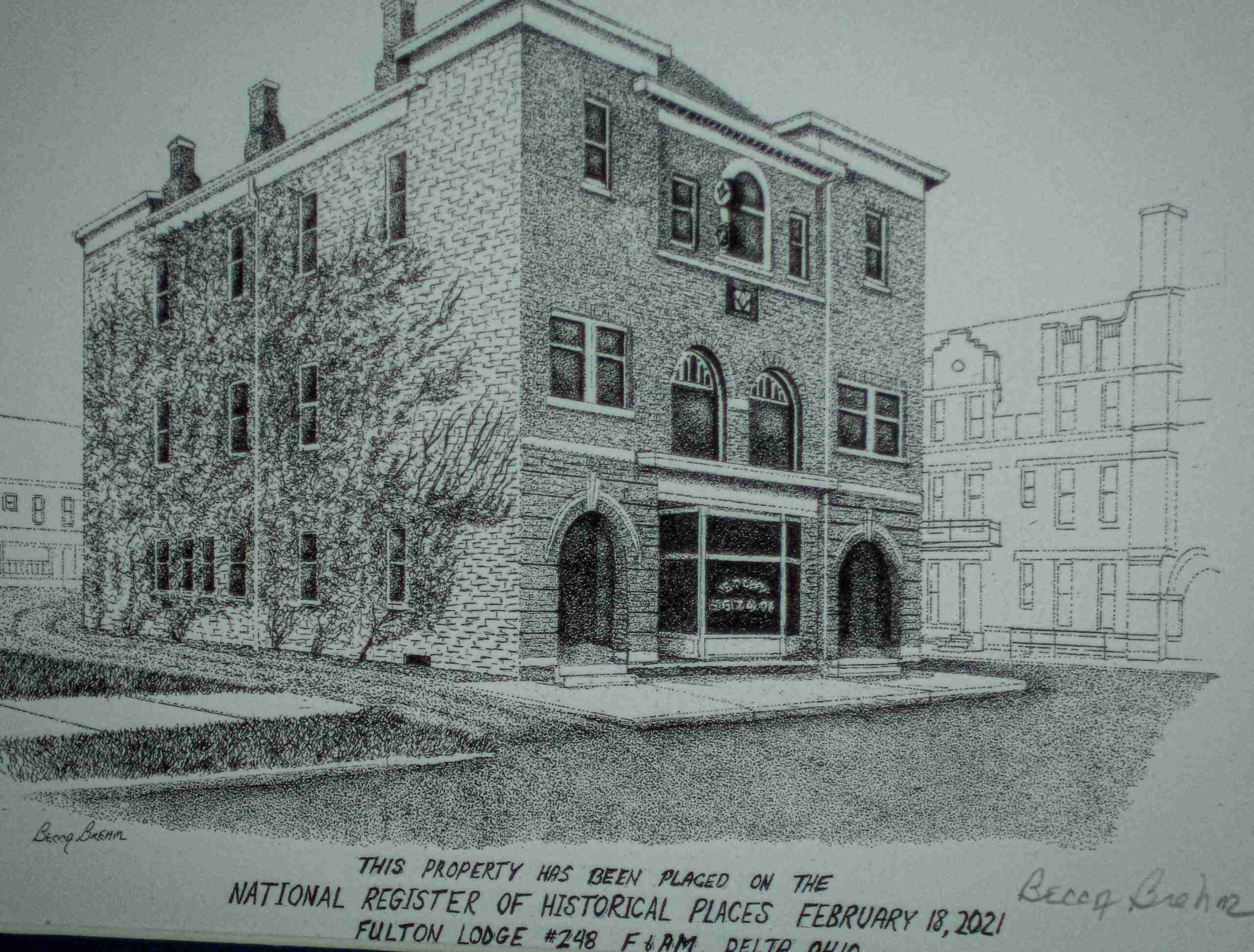 ART SALE … Local artist Becca Brehm from Delta created a print based on a old historic picture of downtown Fulton Lodge in the early 1900’s. Prints can be purchased by contacting the Lodge Secretary.

Today, in North America alone there is over two million Freemasons, with seventy-five thousand located in Ohio. Created in 1854, the F and AM Masonic Lodge #248 has continued to serve Free and Accepted Masons in and around Fulton County.

In February of 1854, a group of Masons gathered in the home of Octavius Water, who would later serve as Senior Warden, to petition the Grand Lodge for a dispensation to start a Lodge in Delta, Ohio.

Requests for a new lodge were granted from Northern Light Lodge out of Maumee and Superior Lodge from West Unity.

Daniel Knowles was elected the first Worshipful Master for Fulton Lodge in March of 1854. Early meetings, prior to the first lodge room being rented from Brother J.N. Marsh, we’re held in the residence of Octavius Water.

The lodge was able to purchase a lot, and built a two story wooden building at what is now known as the corner of Main and Lincoln street in Delta.

A major catastrophe struck the village of Delta on August 18, 1892, where the downtown area including the Masonic Temple and many homes were destroyed by a fire. Following the fire, a new brick three-story building was built.

Freemasonry is the oldest, largest and most recognized fraternal organization in the world. Masonic related groups include Lodges, Shriners, Scottish and York Rite, Grotto and the Order of the Eastern Star.

These groups contribute to charity, give various college scholarships, and are devoted to fellowship, moral discipline and mutual assistance.

Last year, in 2021, the Fulton County Lodge was awarded a place in the National Registry of Historical Places.

In hopes of purchasing a historical marker for their building, Fulton Lodge has started selling prints that were made based on an old picture from the early nineteen hundreds of the Lodge Building. Local artist, Becca Brehm from Delta was commissioned by Lodge brother and Postmaster W.B. Don Gerdes.

With two thousand-seven hundred dollars still left to raise, Treasurer, Richard McKibben shared, “There are no fundraisers currently planned, for the present; however, we will have future fundraiser’s.”

Prints are matted and can be purchased in an acetate sleeve for twenty-five dollars, or framed print for forty dollars.