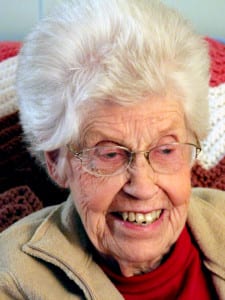 Marjorie Miller, age 95, of Edon, Ohio, died at 11:00 P.M. on Saturday, November 23, 2013, in her home, surrounded by her family. Mrs. Miller was a 1936 graduate of Milford High School in Milford, Illinois. A farm wife, she had also worked in accounting at Essex Wire in Fort Wayne. Indiana, for ten years and was a member of the Edon Church of Christ, where she was the oldest member. The greatest joy in her life was spending time with her family, especially all of her grandchildren. Marjorie Miller was born on May 22, 1918, in Milford, Illinois, the daughter of George H. and Christina (Grey) Smith. She married Harold D. Miller on April 17, 1949, in Edon, Ohio, and he preceded her in death on November 7, 2008.

Services for Marjorie Miller will be on Wednesday, November 27, 2013, at 11:00 A.M. in the Edon Church of Christ with David LaDuke, Minister officiating. Interment will follow in Edon Cemetery. Visitation will in the Krill Funeral Home, Edon, from 2-4 and 6-8 P.M. on Tuesday, November 26, 2013.

Memorials are requested to the Edon Church of Christ or Community Health Professionals Hospice Care.

Condolences may be sent to and the online register signed at www.krillfuneralservice.com