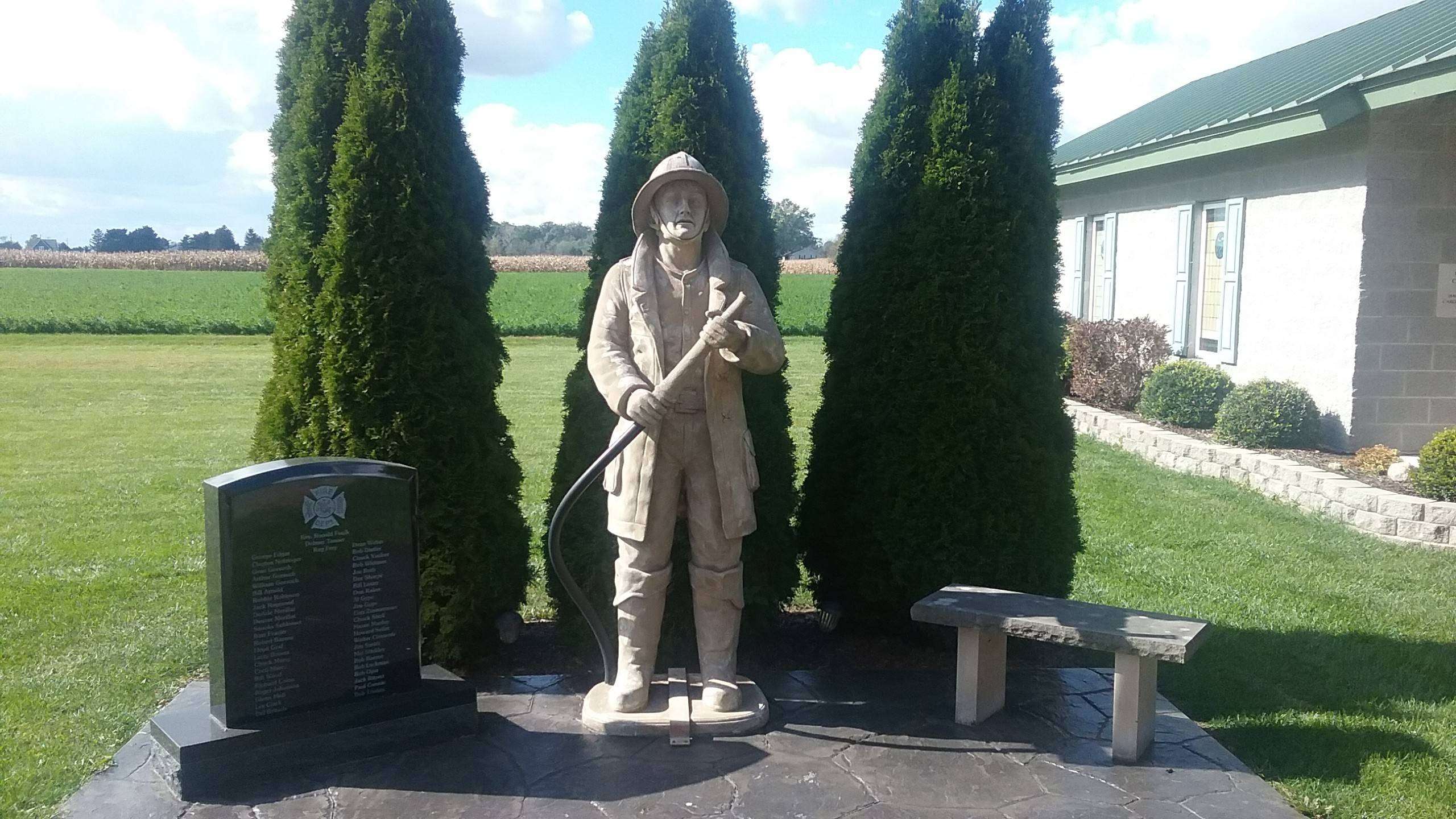 There are those who have high respect for firefighters. Maryann Reimund can be counted amongst them, but she has taken that respect to a whole new level.

If you’ve noticed a firefighters memorial in the Wauseon Union Cemetery, you can thank Maryann for putting it there. Maryann is the daughter of Delmer and Ruthann Tanner, and grew up with her twin sister Sherryann (Franks) and brother Wesley.

She is the wife of Reggie Reimund, and the mother of Danielle, Chelsea (Wiley) and Erin. Her life story is centered around civic fire service. “I grew up at 233 Clinton Street in Wauseon,” she said, “…which is across from the Fire Station.”

“My dad was a volunteer fireman, so it was always exciting as a kid to hear that phone ring at that long constant ring, as that was the way they were alerted back then.”

“Mom would always grab the phone and get the info as Dad would scurry to get out of the house, as it always seemed to be a race as to who could get there first!”

“She would often times be yelling out the door to him, telling him the location and type of call as he ran across the street. Back then, they sounded the whistle for all calls, so it was always my twin and I who would be plastered in the windows to see them leave the station.”

Maryann continued, “Back in the 1960’s, it was just an unspoken fact that all of us kids had more than one dad and certainly more than one mom. It was a department that not only looked out for one another, but for their children as well.”

“It was one big happy family to say the least, and there was a bond that is often lacking in today’s time. As a result, even after we moved away from the area, this bond remained strong as these people remained in my thoughts and prayers.”

“When we moved back from Kentucky after being there for 20 years, I decided the year that the Wauseon Fire Department hosted the Firemen’s Convention, that I would do my best to call together all the firemen from that era for a banquet of sorts.”

“I was saddened as to how many of these men had been called to their heavenly home, for it was a true sign of the fact that time doesn’t stand still.” Maryann drew her inspiration for the memorial from a blaze battling member of the clergy.

“There was one particular man who was actually the reason for my drive behind this memorial,” she said. “His name was Reverend Ronald Foulk. He began his pastoral career right here in Wauseon, Ohio.”

“It was often said that if the whistle blew while he was in the pulpit, the sermons were cut short. He was a very dear friend of our family, and since he and his wife never had children, I was glad to fill that void.”

“When he accepted a call in Marion, Ohio, to Pastor, our dad also accepted a transfer with American Water to Marion as well. Our bond only grew stronger as he was a mentor to me. I loved him dearly, and he was not only a part of my family but he would become a part of our children’s lives as well.”

“It was shortly after the convention that Reverend Foulk told me he had esophageal cancer. His prognosis was grueling, as he required surgery, chemo and radiation.”

“I knew that despite our belief in God and despite all the faith we had in our God, the outcome could very well be what I feared most.”

Maryann continued in her remembrance of Reverend Foulk, saying, “The words of which he spoke to me of his love for firefighting, and his even deeper love for the Wauseon Fire Department ignited a spark within my heart.”

“This man absolutely loved fighting fire. Whether it be the adrenalin rush, or just his passion in life. I always heard the stories how he was on several departments throughout his pastoral profession, and the one that stuck in my mind was that they always wanted him to be Chaplin, but…he had to fight those fires; it was what made his heart happy.”

“He loved protecting and serving whatever community he was assigned to. I knew that I wanted to do something that would make him smile. His dying wish was to have one more ride on that white fire truck.”

“Well, that wish didn’t come true, but what I did make happen was the resurrection of a memorial that would not only hold his name for all to see, but the names of his brothers in service as well.”

“It was an era that will be forever etched in my heart, as well as the hearts of many others. What started out with three plots being purchased by Reg Frey, who had seen my dream and believed in me, took off from there.”

The memorial was underway. “It actually started out with blocks with the names of those who now appear on the monument,” said Maryann. “The statue and the cement pad came later. It was one of those ideas though that consumed my every thought; I am not one to do something half way.”

“I had a vision and I wanted it to be as nice as it was in my dream. Chris Rorick from Wauseon poured the cement pad and did so as a donation, which was huge!”

“And then of course this year, Chad Funk from Funk Concrete sealed the pad at no cost. It means so much as it’s been difficult to solicit money. The statue is of sandstone, and the only place I was able to purchase this from was in the Philippines.”

“Though it was costly, I was not about to stop as this dream was about to become as real as it could get. The company of which I purchased this from was located in New York.”

“It was a long drawn out process as we were at the mercy of the seas upon which it would come on.” “It is my true desire to see this memorial stand until the end of time,” Maryann said.

“Unfortunately these things do need upkeep and ongoing care. I would love to see a flagpole there at the memorial, and I would love to be able to come up with a statue that will never need to be replaced.”

“Unfortunately, those statues are very costly, so it is my dream now to obtain the funds to replace the existing statue and to keep this memorial as beautiful as the men and women that it represents.”

“I would like to express again that this memorial is for ALL who have served in this service, whether it be past present or even the future. I want Wauseon to be proud to have this in the Wauseon Union Cemetery and know that there are no boundaries of who this represents!”

“There is a tax exempt account set up at Huntington Bank which also allows memorial funds from funeral homes should anyone choose to use this as their loved ones memorial.”

Reverend Foulk didn’t live long enough to see the construction of the memorial, but Maryann knows that he has the best view of all from heaven.