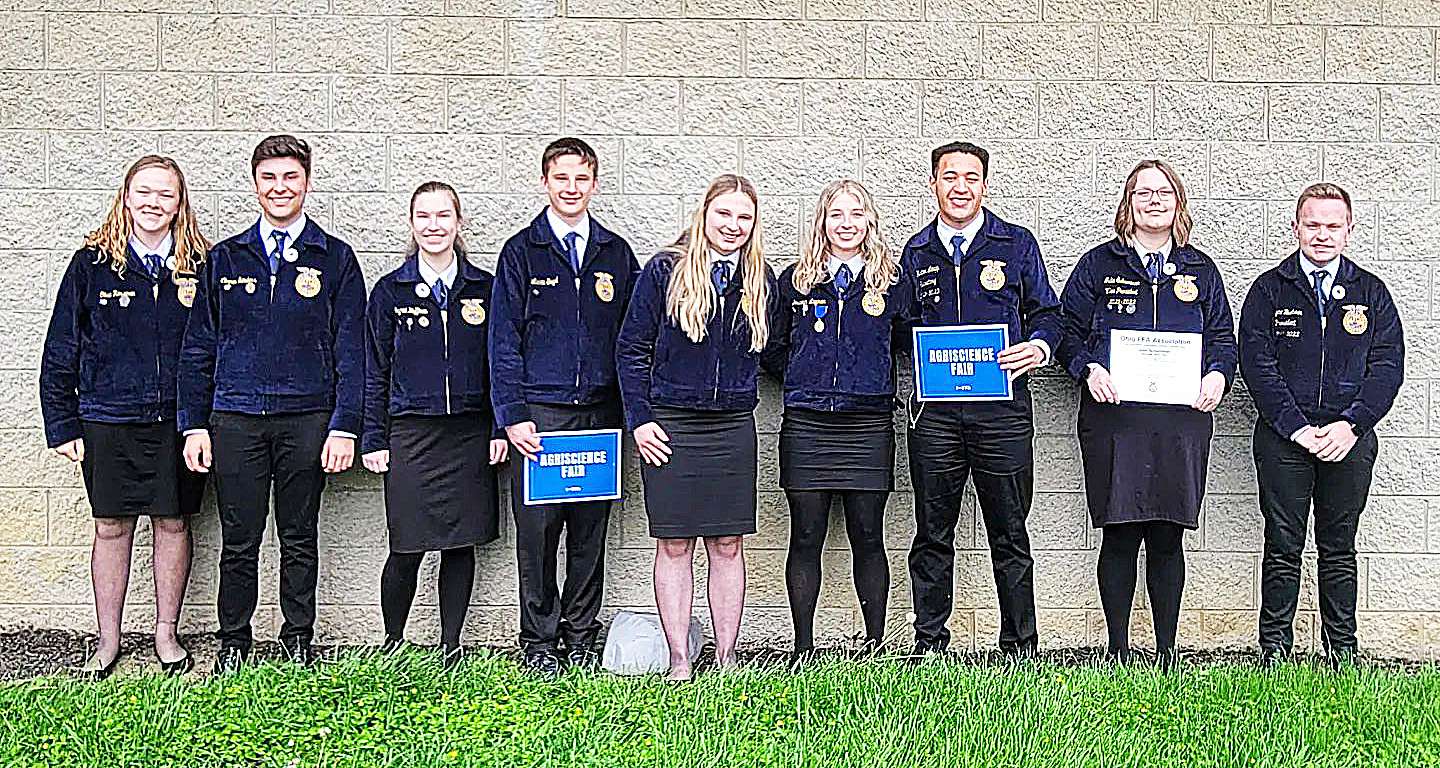 The month of May was busy for the Millcreek-West Unity FFA Chapter. To begin the month, ten members attended Ohio State FFA Convention, participated in state band and choir, and received many awards.

On May 5th, the members attending convention began their day with a tour of the North Market (a fresh farmer’s market) in Downtown Columbus. There, they were able to try different foods from four of the vendors that included food from around the world!

They then selected their lunches and snacks from the wide variety of vendors and business located at the market. After the tour and lunch, the group went bowling at Ten Pin Alley.

The following day, May 6th, the members began their day at the Ohio Expo Center with State FFA Band and Choir practice for Ingrid Hoffman, Olivia Rossman, and Conner Sanders.

At 4:45pm the State Band and Choir participants presented musical pieces in preparation for the State Degree Ceremony at the 5th General Session. At 6:30PM the State Degree Session began and the group celebrated with Lana Baker, Ericka Dennison, and Hunter Leupp as they received the coveted State FFA Degree!

On Tuesday, May 10th, the chapter hosted Ag Minute-To-Win-It games for the Kindergarten through 6th grade students. The chapter members had a fun time working with the elementary students by leading them through a variety of tasks to complete in 1 minute or less.

At the end of each time slot, the students who earned the most tickets from completing the activities correctly in one minute or less were entered in a drawing for the prize of Ag Minute-To-Win-It Champion for their grade level.

In the evening, two members (Levi Cox and Ingrid Hoffman) attended the District 1 FFA Officer Training and Banquet. During the first hour, Levi and Ingrid attended training sessions and workshops hosted by past State FFA Officers.

After the training sessions, the District 1 FFA came together for a meal and recognized FFA members for their accomplishments throughout the year. The Millcreek-West Unity Chapter came home with a good amount of hardware!

The following day, May 12th, FFA members were invited to the Ag Room for their annual FFA Bucks Auction. FFA Bucks is the chapter’s incentive program where FFA members can earn “FFA money” for being active in the FFA and attending meetings and conferences, as well as competing in Career Development Events.

While FFA members enjoyed a lunch of pizza from Wyse Guys, chips, and pop they used their cumulative FFA Bucks to bid on a variety of auction items including, FFA apparel, pop, candy, and gift cards.

Friday, May 14th, the entire chapter hosted an Ag Awareness day for the school. Groups of FFA members were paired together to create a hands on display representing a facet of the agricultural industry.

As students attended this event, they rotated through each industry and were able to learn more about that sector from the FFA members and hands on activities.

On the following Monday, the Millcreek-West Unity FFA Chapter finished their FFA Week Celebration on May 16th with the 2022-2023 Millcreek-West Unity FFA Chapter Officers of Abby Austin, Levi Cox, Ingrid Hoffman, Joscelyn Layman, Shealyn Martin, Brooke Moreland, Olivia Rossman, and Alora Siegel celebrating and thanking the school staff for their service to the school by hosting a Burger Bash luncheon.

The officers enjoyed preparing the meal of hamburgers and sausage (with the sausage donated by the Williams County Pork Producers), all the toppings, fruit, veggies, and Cookies on Demand Cookies for those who spend so much time and effort into the students’ future!

As the 2021-2022 school year comes to a close, the chapter members are looking forward to Millcreek-West Unity FFA Officer Training taking place in June and preparing for the Williams County Fair at the beginning of September!