Millions Of Dollars Pour Into Williams County For Revitalization/Redevelopment 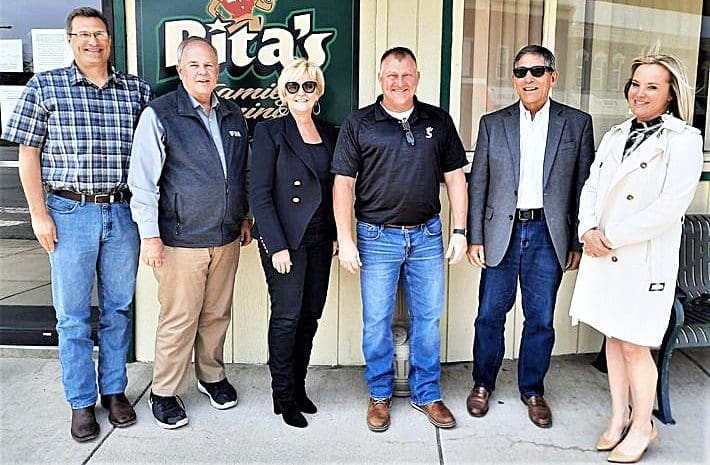 GRANT TEAM … This is the outside team that helped Edgerton successfully maneuver through the grant process. The process included many trips to Edgerton over the last couple of years. “They were a great help,” Edgerton Mayor Robert Day said. L to R: Dave Zbieszkowski – August Mack Environmental of Indianapolis, Mayor Day, Candace Moeller – owner of the Metals property, Kevin Gaskill – overseer of the property, Environmental lawyer Frank Deveau – Taft Law, Indianapolis and Village Administrator Dawn Fitzcharles. Not pictured are Chris Walker, Village of Edgerton Law Director and Mike Mustard, Attorney Fort Wayne, who both were deeply involved. (PHOTO COURTESY OF VILLAGE OF EDGERTON)

As expressed by Dawn Fitzcharles (Edgerton Village Administrator and Port Authority Board Member), who is very involved in Williams County growth, this is a “Great day in Williams County” as $5.79 million will be received, of the $88 million in Brownfield Grants to Create Redevelopment Opportunities. Governor Mike DeWine announced the $88 million and a list was sent out of all of the projects across the state that will be receiving a portion of this huge sum of money.

In Northwest Ohio, there is a unified approach to life, with many aspects being thought of as four or five county efforts. In that light, other nearby counties will benefit from these grants, as well.

Henry County is receiving $541,470 to remediate the property of the Florida School, $675,525 for cleanup and remediation of the former Central School in Napoleon, and $191,250 for Karl and Jan’s Bulk Fuel area.

Van Wert County Land Reutilization Corporation will receive $561,000 for the Van Wert Forward project and $224,400 for the former home of the Anthony Wayne Elementary School project.

Fulton County Board of Commissioners will be awarded $122,862 for the former Jackson Cleaners project in Wauseon.

Many, if not all, of these projects across the counties are clearing sites to make them available for future development.

Some of them will be revitalized but most will be torn down, cleaned up and repaired for parks, housing and businesses to join the community.

All the communities are thrilled with this turn of events as many organizations have been busy trying to fashion facelifts to draw in more residents and businesses.

In Williams County, the $5.79 million will be spread over three projects. The Village of Edgerton has been fully funded for the ‘Metals Property’ remediation through the Ohio Department of Development, as stated in a formal press release, “Ohio Governor Mike DeWine and Lt. Governor Jon Husted today announced $88 million in state support for 123 brownfield remediation projects that will help clean up hazardous and underutilized sites throughout the state including: The Village of Edgerton ($3,987,500) and Edgerton Development Corporation ($970,000) received a total of $4,957,500 toward remediation of the 4.394 acres commonly called the ‘Metals’ property along the St Joe River.”

Mayor Bob Day’s response was: “This is a red-letter day for the Village of Edgerton and illustrates what can be accomplished when local entities partner together for the greater good of Edgerton.”

“Edgerton Development Corporation and the Village of Edgerton have been pursuing this property for several years.”

“This funding will allow the cleanup of this property for positive future development. We are committed to doing things in Edgerton that will live long beyond us.”

“We continue to move forward; our future is bright as God has been very good to us….”

Candace Moeller of Moeller Land & Cattle (the owner of the Metals property) thanked all involved in the application process and hopes for the future, saying, “Thank you for all your help, hard work and persistence involved; not only for us but for the Village of Edgerton.”

“I am elated that something positive can come of our property,” and Jason Dietsch of Edgerton Development calls the announcement “A great opportunity for Edgerton to develop the area into something of value to the community.”

Village Administrator Dawn Fitzcharles added, “We are incredibly blessed to receive the funding intended to help communities in need of transforming contaminated sites into community assets, that not only create jobs and jumpstart economic development, but also improve public health and the environment.”

“The planning and execution of this project has been years in the making, and we are eager to begin the work.”

“The redevelopment will provide a sense of community to our residents and visitors, while providing a unique landscape for mixed use housing and recreational opportunities along the St. Joseph River. Go team Edgerton!”

The money will fund the cleanup and remediation of a “former plating facility, the 4.394-acre property has been used for industrial and residential purposes since at least 1901.

Many businesses have operated on the property since, with the most recent being Edgerton Warehouse Leasing LLC and Edgerton Metals & Recycling.

The property is currently vacant, and all previous structures were demolished in 2020. Remediation will include mitigating soil, groundwater and sediment impacts associated with previous operations on the property.

The other two projects in Williams County that have been awarded funds to assist in getting them where the communities want them to be, are in Edon and Bryan.

Ohio Land Reutilization Corporation, or as it is called in Williams County – The Williams County Land Bank, is the organization which applied for both of these projects.

Commissioners Lew Hilkert and Terry Rummel both serve as members of the landbank Board of Directors along with Brian Wieland, Vickie Grimm, Todd Burkholder, Kellie Gray and Jason Rockey, in 2022.

The Edon School Redevelopment project will receive $551,997 for cleanup and remediation of Edon Northwest School.

This was a school till 2005 and was used till 2010 as a storage facility. Cleanup and remediation will include the abatement of the asbestos and demolition of all the structures.  The site will be redeveloped for commercial and recreational use.

“The village is happy to see the removal of the old school. It has set there and had nothing done to it for years.”

“With the large need for residential housing, we hope to see that area populated with new housing. The village is grateful of the Land bank for taking on this task,” Edon Village Administrator Chad Ordway said.

Commissioner Hilkert commented, “In regards to the former Edon School in the Edon Community…that has been an eyesore for a number of years and it will be nice for the community to be able to turn that into other usable space in the future. Whatever that may be will be good.”

The Williams County Courthouse Project will get $282,475 toward the cleanup and remediation of this historical building.

Cleanup and remediation will include managing asbestos materials, abatement, and monitoring.

The site will be redeveloped to allow other county departments and commercial office users to lease space from the county.

Williams County Commissioners have been working hard to get the building in great shape, getting new windows put in and having other much needed work done.

Commissioner Terry Rummel shared, “This will be the last of the asbestos in the courthouse. We look forward to finishing the renovation in the new year.”

Hilkert added, “The commissioners are pleased to have this grant awarded to remove the asbestos from the fourth floor. Now we can get this done and convert it back to useful space.”

“Anticipation is that the whole remodeling, after the removal of the asbestos, will be done by the end of 2023.”