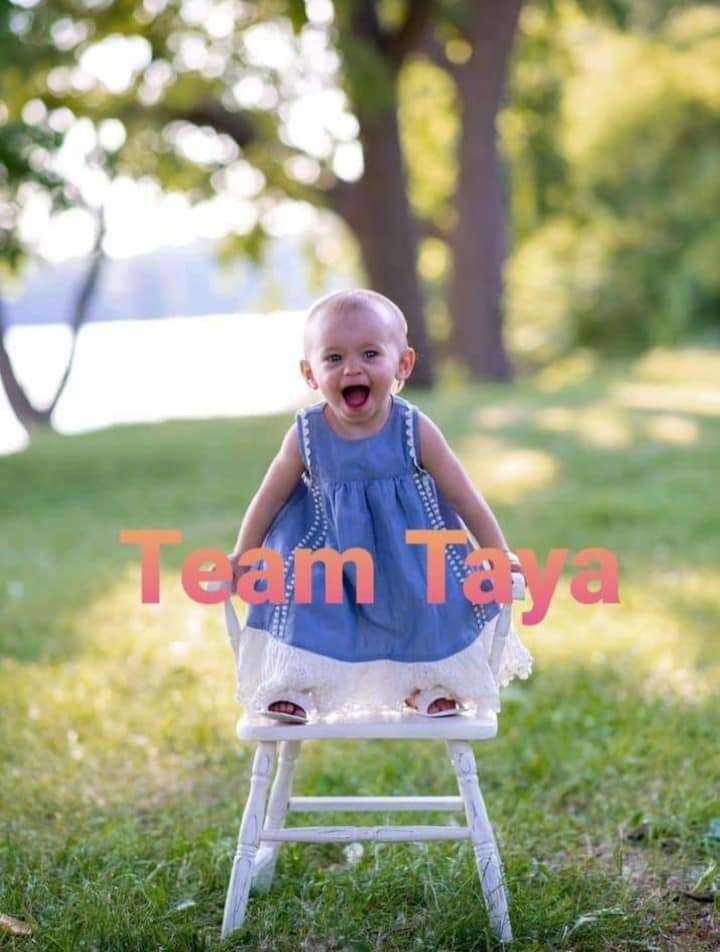 There isn’t a person alive who hasn’t heard of the devastating illness we call Cancer. A truly terrible disease that affects millions of people in so many ways every year, whether through watching a loved one battle it, treating it as a medical professional, or even developing it yourself.

Two-year-old Montpelier toddler Taya Beck has been forced to endure one of the toughest challenges any human being can face in their lifetime.

On April 19th of this year, Taya’s devoted parents, Dalton and Naomi watched their smiling little sweetie slowly begin to decline, refusing to eat and sit up. Horrifyingly, doctors at first couldn’t figure out the problem.

After being treated for mild dehydration, Taya was sent home, and as the days crawled by, she seemed to only be getting worse.

The very next day, her observant mother Naomi saw that Taya refused to lay on her right side and her right leg appeared motionless.

Her family rushed her back to ER, who decided to send her to specialists.

A pediatric neuro team sent Taya into a peaceful sleep while they prepared her for an MRI and several other tests, all geared to find out what was causing the little girl so much pain and discomfort.

Thankfully, the MRI was the only test needed and the team finally discovered the terrible—but treatable—truth. Taya had a malevolent mass growing on her spinal column, pushing on her spinal cord and causing paralysis in her limbs.

Relative to her body size, it was a fairly sizable mass, stretching from her neck to between her shoulder blades.

Taya has been diagnosed with Round Cell Sarcoma, an extremely rare form of cancer which has only been observed in six—now seven—individuals. It’s usually found in the belly, but isn’t unheard of to occur elsewhere. Taya is one of the youngest people to have developed it.

It was a tense, ominous time as the team decided that Taya needed experts in Columbus to tackle the monster harming the child.

The idea of their little girl in such a potentially risky surgery was terrifying, but Dalton and Naomi were willing to do whatever it took to bring their little peanut home again. At 12:30 am that Monday morning, Taya was transferred to Nationwide Childrens Hospital and prepped for surgery.

The team of seasoned medical professionals predicted a 4-6 hour surgery to remove the mass from the child’s back. It would be a long and agonizing wait.

Amazingly, the surgery lasted only an hour and a half and Taya was in out and headed for recovery faster than they could blink. The mass came out easily with only one bone needing to be removed.

However, the mass left Taya’s spinal cord severely swollen, rendering incapable of walking as of April 29th. However, with extensive therapy, patience and faith, doctors are cautiously optimistic that eventually, the swelling will go down and Taya will regain the ability to walk.

In the meantime, the family remains in Columbus for Taya’s therapy and Naomi has taken time off work to be with Taya.

The family has setup a GoFundMe both to help pay for Taya’s care and to support the family during this trying time, as Naomi’s leave is not being paid for.

Thankfully, the GoFundMe page is long since exceeded the goal amount with the number continuing to climb as a result of the amazing hearts of the community.

With love, patience and care, Taya’s road to recovery is long, but imminent, and in the meantime, her smile has returned to grace her grateful family’s home once again.

Those wishing to help can donate to the family at https://www.gofundme.com/f/help-for-baby-taya-beck to help support her family as they ease her back into the goofy and active baby she was before.

Be the first to comment on "Montpelier Baby Fights Cancer Diagnosis, Community Rallies Together"