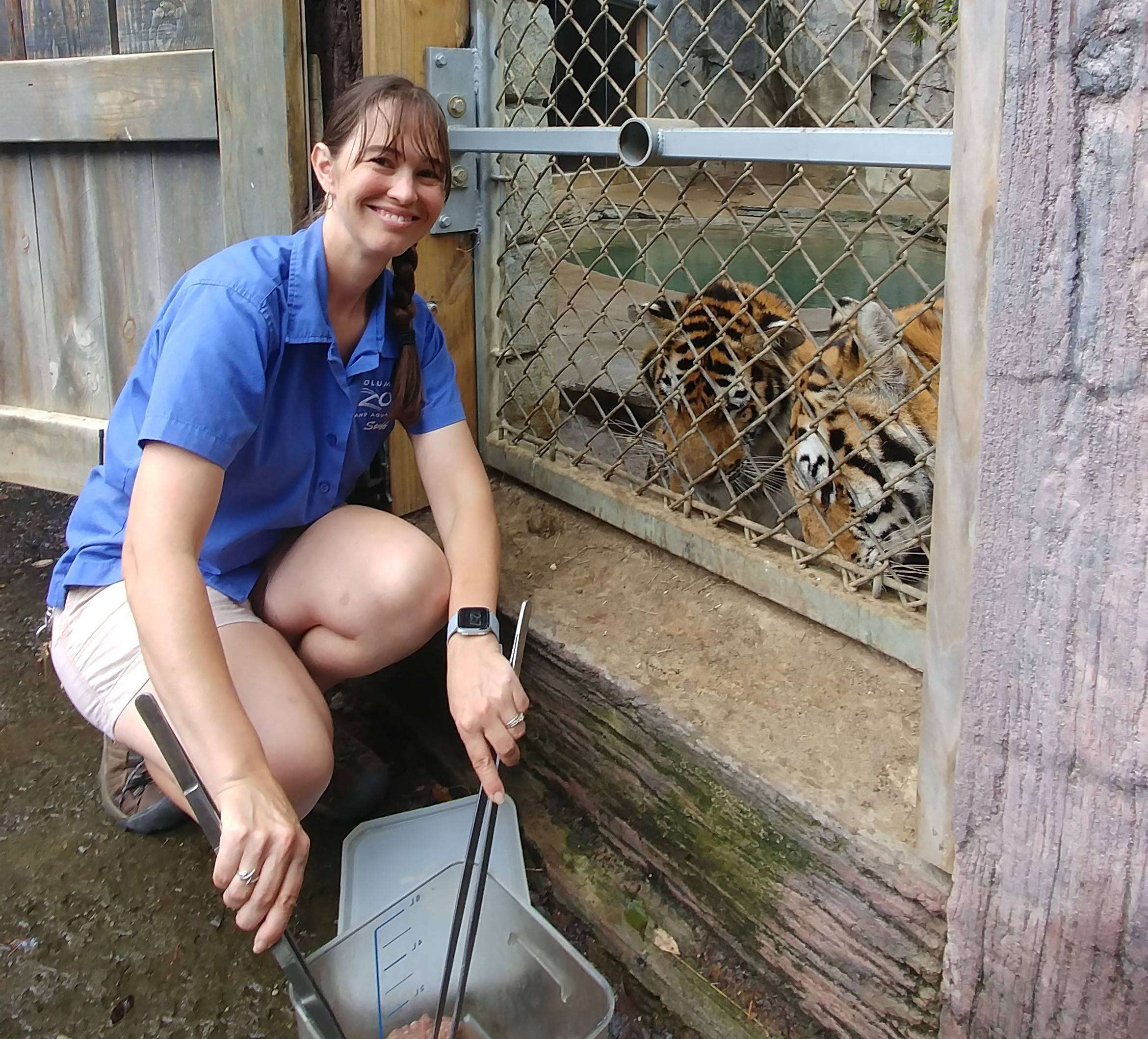 They say that if you find a job that you love doing; you will never work a day in your life. A Williams County native is proving that point quite nicely. A member of the Montpelier Class of 1997, Carrie Wolf Ritchie is having a blast at her job in Columbus.

“My mom is Deb Clark,” she said, “…and my stepdad is Jeff Clark. I’ve got three brothers, and they’re all down here…Matt, Mark, and Michael Wolf.” Once she graduated from Montpelier, Carrie attended The Ohio State University, majoring in animal sciences, graduating in 2001. “I’ve been at the Columbus Zoo ever since. I was a seasonal to begin with when I started in 2001. I am now a full time zookeeper in Asia Quest. The species I work with are Amur tigers, sloth bears, sun bears, red pandas, langur monkeys, flying fox bats, markhor, many species of birds and small hoofstock (such as) Reeves muntjac, tufted deer, Siberian musk deer. I am primary on the sloth bear, so I do all the initial training with them.”

Those who have the cable or satellite package necessary to get the National Geographic Wild channel had an opportunity to see a new program called, ‘Secrets of the Zoo’. The first program in the series aired July 29. Amongst the segments shot at the Columbus Zoo was one showing the staff, including Carrie, working to get three Amur tiger cubs acclimated to the yard where they will be living. “They’re over a year old now,” she said. “…but they’re still our cubs.”

“From the time that I was young,” Carrie said, “…I’ve always had a love of animals. That’s kind of what brought me to working at the zoo. Now I can work with species and help with conservation, and educate people on the different endangered species.”

Carrie extended an invitation to come on down and visit the zoo. “I’ve had a few from back home come down and look me up,” she said. “Actually, there’s one other keeper from my Northwest Ohio area…Amanda Schaffner from Fayette. She’s on the same episode with me. We are still filming, and probably will be in future episodes.”

If you don’t have access to National Geographic Wild on your television, you can still catch Carrie by going to https://www.nationalgeographic.com/tv/secrets-of-the-zoo/.