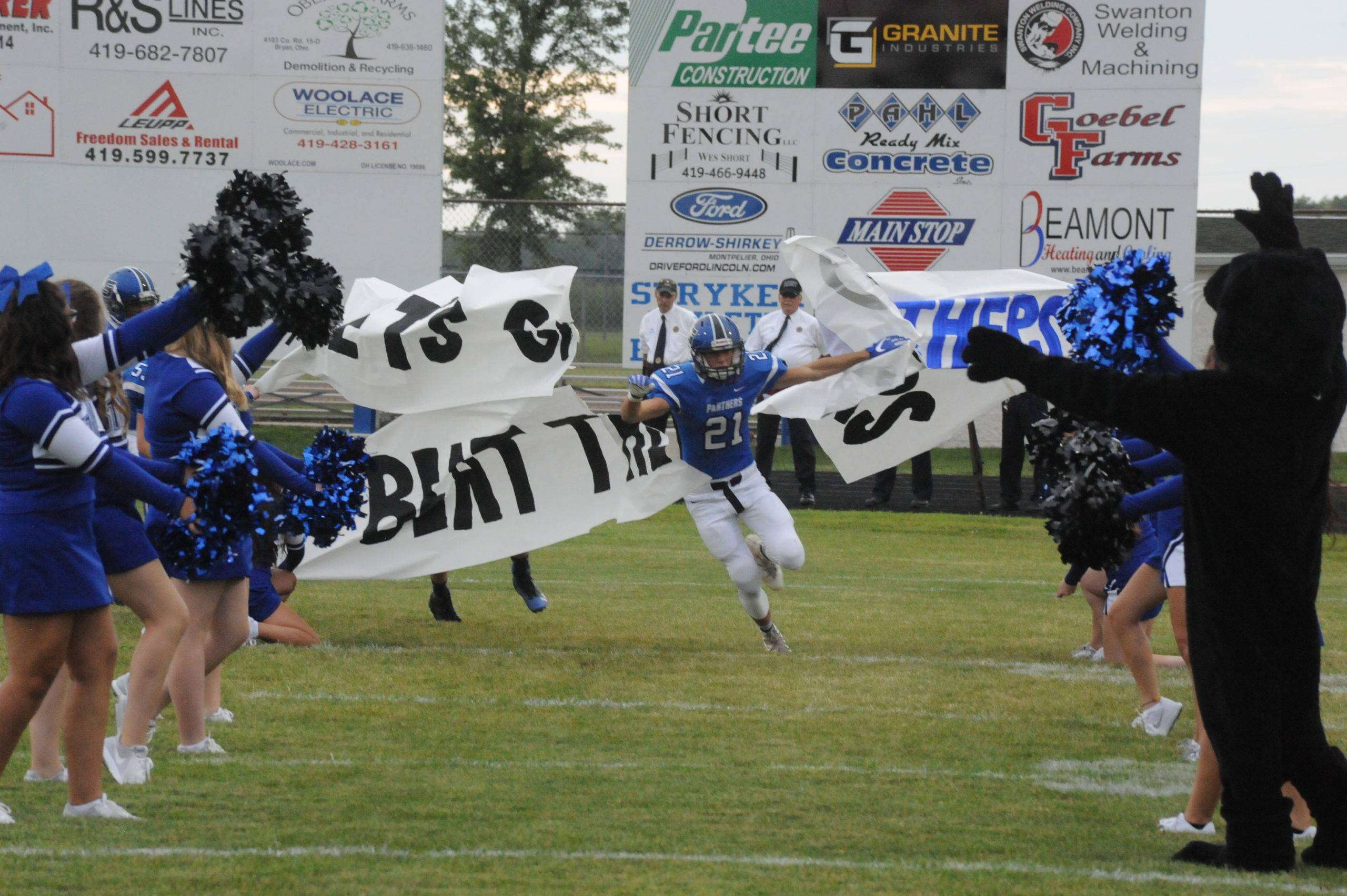 1931 was quite the year.
Leonard Nimoy, a.k.a. Mr. Spock, was born in 1931. New York was buzzing during 1931 with the completion of the Empire State Building and the George Washington Bridge. The Star Spangled Banner was officially adopted as our national anthem, and the State of Nevada legalized gambling, thereby bestowing immortality upon Las Vegas.

1931 was also the last time that a varsity football game was played in Stryker…until the evening of August 24, 2018.

87 years after the last varsity snap was taken, varsity football returned to Stryker, Ohio. With the Holgate Tigers in town to take part in the history making event, seats inside the Stryker Stadium were almost as easy to find as parking places outside.

The excitement level was off the chart for this, the introduction of the Panther faithful to their own version of Friday Night Lights. Although they have registered all of three wins since the 2015 season, Holgate came into town with one distinctive edge…experience. It was that experience that they relied upon to take advantage of the numerous mistakes of the hometown boys, and it was that experience that the Tigers rode to a 57-14 win.

The first coin toss in nearly nine decades went to Holgate, who elected to receive. Their first play, a draw behind the left guard, was stuffed by Stryker for a gain of one foot. With the hometown faithful cheering the stand, the next Holgate play, a jet sweep to the left, found nobody home. A 20-yard gain on that play was answered by a run to the right that gained thirty, and put Holgate at the Stryker 31.

Two more runs left the Tigers with a third and three from the 23, and a quarterback run made it fourth and a long one. Rolling the dice on fourth down, a run to the right picked up the first down, and more. Another quarterback run netted a yard, but the first Holgate pass of the evening brought the first score at the 7:37 mark in the game. The two-point conversion was good, and the Tigers had an 8-0 lead.

On Stryker’s first offensive possession, a little swing pass to the left fell incomplete. Junior Izaiah Sanchez took the handoff on second down and picked up six. Stryker was able to march their way down inside the Holgate 40, but a fumbled snap killed the drive when a Tiger fell on the ball at the 45. The Panther defense held, but on fourth down the Tigers returned to the jet sweep that worked so well earlier.

Once again there was nobody home when the corner was turned, and the runner was knocked out of bounds at the Stryker 35.  Junior Max Wonders busted up a pass play. On third down, Holgate went to the air again, but junior Noah Huffman plastered the Holgate quarterback, forcing the pass to fall incomplete.

Going for broke again on fourth down, the Tigers again tried to air it out, and again the pass was errant because Huffman again flattened the quarterback. The Stryker defense had registered their first forced turnover on downs, and the offense took over at the 34 with 2:18 left in the first period.

Sanchez was stuffed on first down, but junior Carter Zimmann found the seam underneath the linebackers where he hauled in a pass from sophomore quarterback, Payton Woolace, for a gain to the Holgate 40. Sanchez took the inside handoff for four on first down. Woolace took the next run, leaving the Panthers with a third and four as the first period drew to a close. Sanchez was stopped for no gain, and on fourth down,

Coach Sonnenberg presented his young team with their first big challenge. That challenge was answered when Woolace found junior Gavin Campbell in the seam between the linebackers and the secondary. The subsequent pitch and catch brought the ball down inside the red zone, giving the Panther Pack a first down at the Holgate 17.

A run by Campbell went nowhere, but a designed run by Woolace around the right side gained eight. On a third and two just inside their ten, the Tigers were called for encroachment. The ball was placed just inside the five yard line, giving Stryker a first and goal. On first down, Woolace had to pull the ball down and switch from pass play to scramble, netting nothing. Sanchez had the answer though, and with 8:04 remaining in the second period, he made Stryker Panther history.

With junior Wyatt Short sealing the left side, Sanchez took the handoff from Woolace and headed for the endzone. He was met by two Holgate defenders at the goal line, but they were unable to stop Sanchez from scoring the first Stryker touchdown in 87 years. Zimmann booted the PAT through with ease, and Stryker was within a point at 8-7.

Holgate immediately returned to their ground pounding tactics, and moved the ball into Stryker territory. The Tiger drive came to a screeching halt when an end around pitch went awry, and Stryker’s Logan Liechty recovering the fumble at the Panther 40.

Holgate was flagged for encroachment, but their defense turned up the heat on Woolace. He was blind-sided from the left side for a loss of eight. On third down, a busted play saw Woolace getting buried alive again. A false start penalty created an impossible fourth and 28.

The Panther punt was fielded at the 40, and run back to the 22. With 26 seconds left in the half, Holgate scored again, this time on a short run. The PAT failed, but the Tigers had a 14-7 lead.

The Panthers, who had battled through the first half, were about the see the proverbial wheels fall off. A combination of fatigue and gaffes borne of inexperience rolled out the welcome mat for the Tigers, who rattled off 14 unanswered points in the third period to pull out to a 28-7 lead. 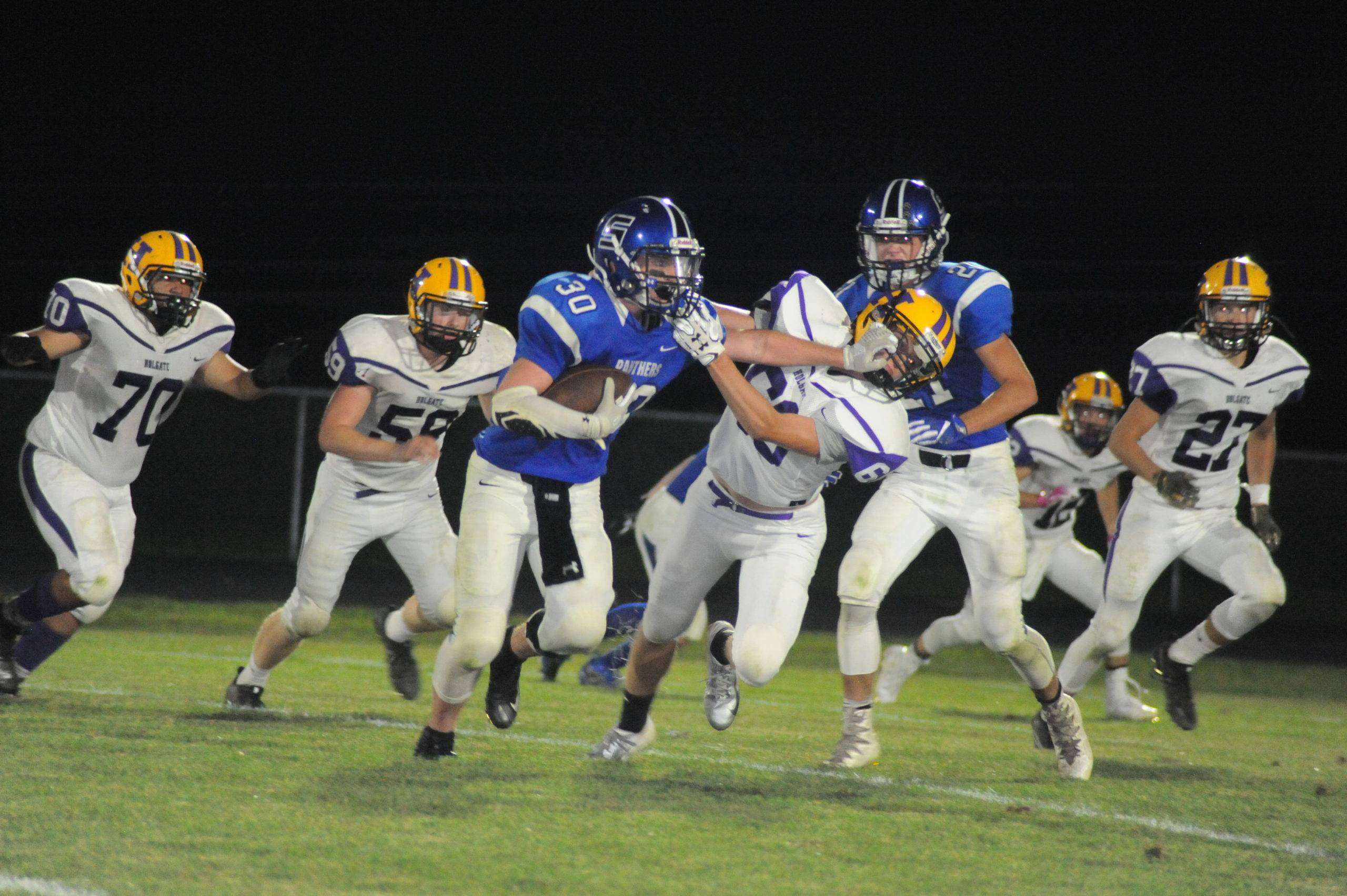 The fourth period saw Holgate taking advantage of every Stryker miscue as the Panther deficit mounted. There was plenty of exhaustion in the Panther huddle, but there was no quit. Trailing 34-7, Woolace found Zimmann for a score to make it 34-13. Zimmann again had plenty of leg on the PAT, and with 11:33 remaining in the game, it was 34-14. That would be all for the Panthers though, as fatigue and mistakes gift wrapped three more touchdowns to allow Holgate to close out the lopsided game.

“We got tired,” said Coach Sonnenberg. “The fundamentals that we’ve worked so hard on…started to go out the window. But we did a lot of good things, and for two quarters we were battling back and forth and playing what I feel is winning caliber varsity football. But we couldn’t maintain it for four quarters, so we’ve got to work hard so we can play like that for a full four quarters.”

When he was first introduced to the Village of Stryker years ago as the man chosen to bring the long dormant Stryker program back into the Friday Night Lights, Coach Sonnenberg was inundated with kids of all ages, saying that they wanted to be the kicker for the team. On this night, the big boot of kicker Carter Zimmann was put on display. “We have a very good kicker,” Coach Sonnenberg said, “… and I’m very proud of Carter. But it just goes to show you that when you work hard, he wants to be a kicker.

But he works hard at everything that he does, and that’s opened up other opportunities for him. He has become a very good wide receiver for us, and he scored a big touchdown for us tonight. So he’s doing a lot of other things other than kicking, even though that’s kind of all he originally planned on.”

“I mean honestly,” Coach Sonnenberg concluded, “I think we did a lot of good things everywhere. Defensively we had some good stops early on; we did some good things. Offensively, we ran the ball well. we passed the ball well. pass blocking wasn’t near where it needs to be, and then it got worse, especially second half, and that got us going backwards.”

“Too many sacks…too many fumbles, but we did a lot of a lot of stuff really well. We just didn’t do it well for four quarters, so we’ve got to be able to maintain that level of play for a full four quarters.”

Be the first to comment on "After Nearly Nine Decades,The Stryker Panthers Return To Friday Night Lights"