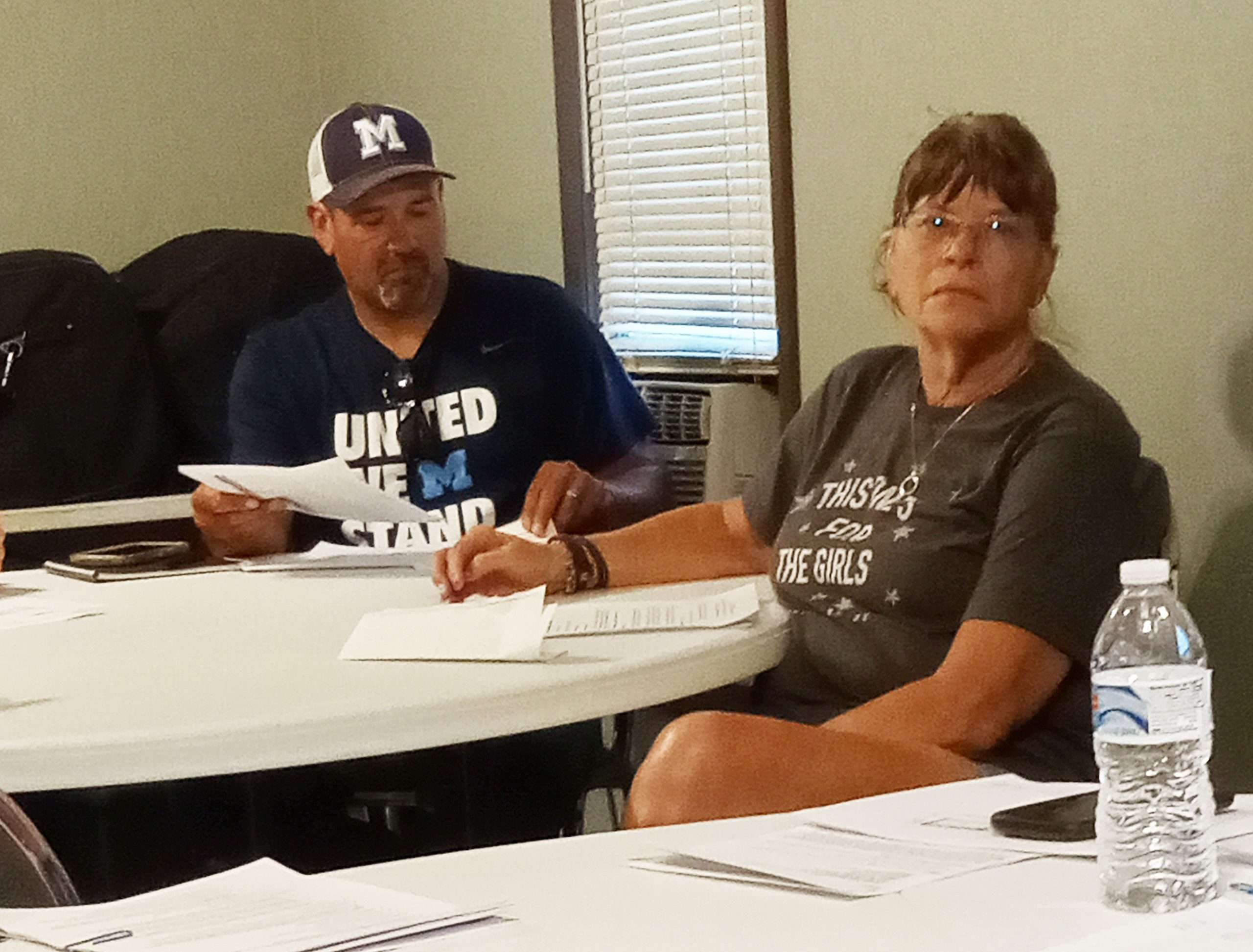 PARK BOARD MEETING … Nick Ramos (left) and Becky Semer (right) get ready to vote on Ethan Adams’ request for $1,500 for an Eagle Scout project. (PHOTO BY DANIEL COOLEY, STAFF)

The Parks and Recreation Board meeting from September 7 began with the call to order. Board members in attendance were Angela Hillard, Matt Reid, Brent Saneholtz, Darold Moore and Kyle Long.

First the park board approved of the previous meeting minutes from August 2. Next parks director Sandy Gordon gave a financial report. The beginning balance for August was $930,337.80 and the end of the month balance was $875,764.35. The board then approved of the financial statements.

Next Scott Gordon gave the Pony League end of the year report. He said that it was another good spring and summer. They had scheduled 16 games and were able to play 11.

During the summer, the team finished with a 14-3 record, with all three losses coming against Edgerton. That included a loss during tournament play. Gordon also said this year’s raffle brought in more money than it ever had before.

Lindsey Willis then gave the softball league yearend report. She said that the 10U team finished with a winning record and that softball registration was higher than last year. Willis reported that the league is losing two umpires, but more are being trained. She also said that they had a good raffle.

Next Ethan Adams of Troop 1125 reported that he is working on his Eagle Scout project and would like to build a GaGa Ball Court between the storage building and Kiddieland.

The board approved Adams’ request and he will be asking for funds in the amount of $1,500 from the Friends of the Park Board.

Nick Ramos then gave a Storrer Park update. He stated that the basketball courts are up and a fence around the court should be finished by the end of this week. He said that the rims will be put up by the end of next week.

Director Gordon stated that Founders Park is still waiting for electrical boxes, which should be coming in October. No prices have been quoted yet.

Also, Chris Kannel will be soliciting funds from the Bryan Area Foundation, around $5,000, for stainless steel stair and ramp railings made by Richmond Machine.

Village Manager Jason Rockey said that he is working out the cost to put up a path that will run from the park to the school.

Ramos then gave a pool update. He said that the last day for the pool was August 15 and that things went well. He is now working on refurbishing the water slide, which should be done by the end of this week.

Next Ramos asked that two lifeguards be reimbursed $100 each and the board approved his request.

Ramos and Gordon met with Peterman regarding the pool project and there will be a proposal that will include the basic design and estimated cost, at the next Parks and Recreation Board meeting. Gordon said that they told Peterman that they wanted the pool work done in phases and Peterman was okay with that.

In a park update, Ramos said they cleaned up the park, mowing, putting in mulch and putting up new steels at the ballparks. They also worked on the dugouts, which should be finished at the end of the week.

In looking at golf carts, Ramos said he would like to see no golf carts driven on the grass and that a place could be found for them to park. No action was taken on the matter.

Gordon announced that Trick or Treat will take place on October 29, from 6-7 p.m., at Founders Park. The Chamber of Commerce is working on an event for that night.

In looking at the recreation report, Gordon said that a National Night Out was held on August 2 at the police department and along area streets. A total of 47 bike helmets, 60 goodie bags and 124 hot dogs were given away.

The concession stands are closed for the season and cleaned out the large equipment to be put in the recreation office. Packed things up for winter storage and emptied out refrigerators and coolers.

Helped the athletic boosters set up for the 100 years of Montpelier football event. Thanks goes out to the Montpelier Public Library for making posters for the event.

Gordon stated that she Installed the sunflower drum in the Kids Garden and began work on concrete pavers for the garden.

On August 12, an outdoor movie was held and 40 people were in attendance. Also on that date, an end of summer party took place, and the pool was open for free. A total of 48 passports were given out, which was up from 42 passports from the previous year.

Weeds were sprayed weeds at Patriot Point. Also, there were seven volunteers and an adult supervisor to help clean out the grasses at the pool and to dig out the perennials. Gordon hopes to plant annuals next spring and got the initial seed order done for next year.

For the soccer season, 152 kids decided to play, leaving room for a total of 14 soccer teams. All the coaches were able to complete concussion and sudden cardiac arrest training.

Scheduled referees for games and sent them their employment paperwork. With picture day on August 20, the season started on August 22 and will finish on October 10.

Gordon said she is working with the library to get crafts ready for the Olde Tyme Holiday Gathering and she took so many pavilion reservations that some people had to be turned away.

In a discussion about adding a municipal sidewalk in various places, it was decided that the best thing to do was to do the project in phases, starting with putting in a sidewalk from the football parking lot to the minor league baseball field. Saneholtz will check on some initial costs and then go from there.

As far as looking at putting in a disc golf course, the area that Matt Reid thought was most feasible is going through a lot of construction now. As a result, Reid plans to look at the project in 2024, when construction is completed.

The park board then voted to adjourn the meeting.