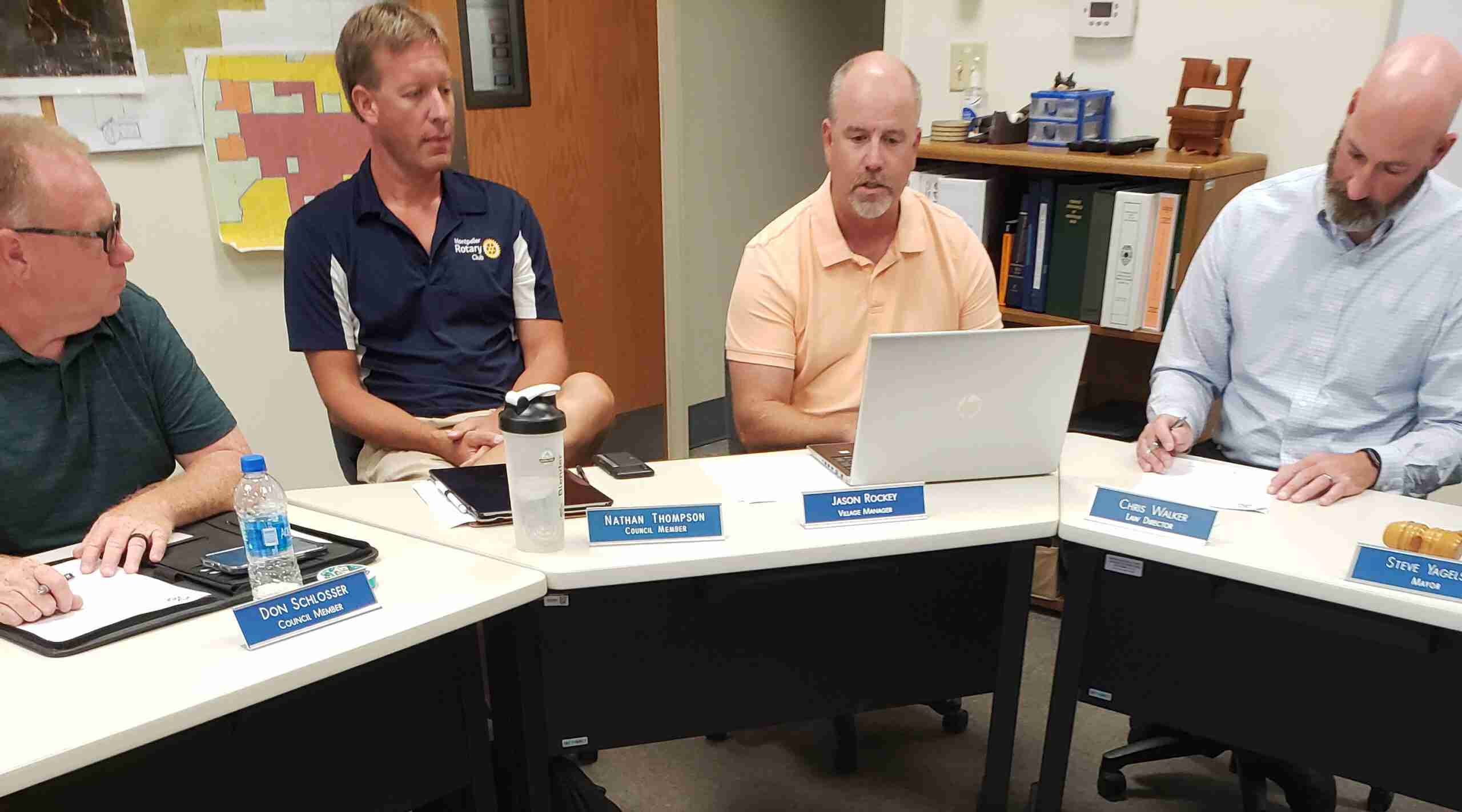 APPROVING CHANGE … Shown are council members Don Schlosser, Nathan Thompson and village manager Jason Rockey. Rockey shared the need for an increase of $7,050 to be added on to the new Wabash Cannonball Connector. Council went on to unanimously approve the added increase. (PHOTO BY DAN COOLEY, STAFF)

Reverend Mary Beth McCandless led all those attending with a prayer and that was followed by the Pledge of Allegiance.

Next, the agenda for the meeting was approved by a unanimous vote. The minutes for the August 9 meeting were also unanimously approved.

The floor was then open for comments from the audience and two audience members spoke.

Montpelier resident Andrew Myers spoke first, concerning what he felt was a lack of maintenance by the village. Two separate times Myers had to clean up sewage backup in his basement.

Myers also experienced a power surge in his house. Though he contacted village officials, Myers ended up footing almost all of the bills for these instances, himself. Schlosser assured Myers that the council will look into the problems.

Rob Taylor, the second audience member, wanted council and the village to be aware of an area that will soon be up for auction. The area is in close proximity to the industrial park.

Village manager Jason Rockey thanked Taylor for the information and met with Taylor after the meeting, for further discussion.

Next came the council and committee reports. Motter informed the group that the first day of the Williams County Fair falls on September 11. Because of this, there will be a flag raising ceremony.
There will also be a 5k run, walk, or steep stair climbing. Motter said that some veterans, firemen and some others, planned to climb the stairs in full battle gear.

It was also announced that starting on that day, Monday, was the first day of construction of the Storrer Park complex. The park, all through donations, will include basketball courts and an amphitheater.

Also, there will be a ribbon cutting ceremony on Thursday at 5 p.m., at the Wabash Cannonball Trail Connector, on County Road 13. In addition, on Friday, NORA will be bringing in a cleanup crew for that area.

Thompson commended the work of Jaret Dye, who repainted a mural. The mural is in the alley to the north of Empire Street.

In the village manager’s report, Rockey reported that canine Knox and his handler, patrolman Randall Mills, are now both a part of the Montpelier police force. Both had to go through Federal certification and Ohio certification.

“Knox is deployed fully and can accomplish a number of tasks, including finding narcotics,” Rockey said. Rockey also reported that grant applications for both wastewater treatment and the CSO 5 project, are underway.

Next, Rockey discussed the shooting range, located in the wastewater treatment area, along with cutting wood and hunting, which are also on the shooting grounds.

“The shooting range is able to be used fully and though not today, I would like council’s thoughts on cutting wood and hunting,” Rockey said. “At this point, if people are allowed to continue to cut wood, I believe they would need to continue to contact the police department first, for a time to come out.”

‘While it would be difficult to allow hunting to be done safely, if allowed, they would need to also contact the police department beforehand,” Rockey added.

Council also unanimously approved the change order for Bryan Excavating, concerning the Wabash Cannonball Connector Trail. The approval was for an increase in the amount of $7,050. That brought the project total to $103,730.

According to Rockey, the village needed to add a couple of construction areas that would provide access to the connector.

With no other further business, the Montpelier Village Council meeting adjourned, by unanimous approval.