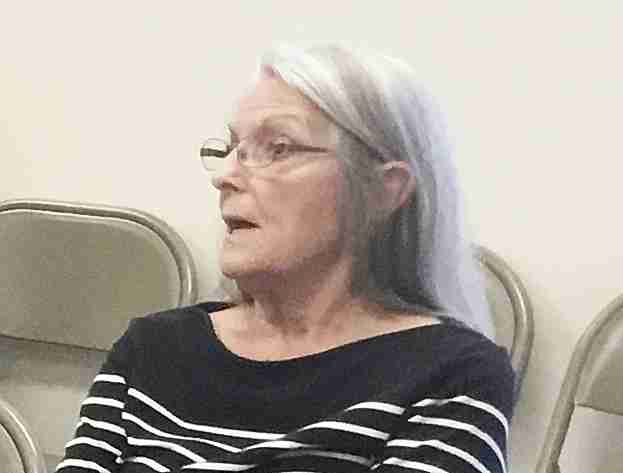 NEIGHBOR TROUBLES … Betty Freese was present to share a frustrating situation with Montpelier Village Council at the August 22nd, 2022 council meeting. She left assured that council and the village attorney will check to see if there is any way they can help (PHOTO BY REBECCA MILLER, STAFF)

They got to hear two different kinds of legislation, a complaint from a resident and how council handled it, and a report from the Village Administrator Jason Rockey.

The Boy Scouts were there, working on the Citizenship in the Community Merit Badge.  Mayor Steve Yagelski welcomed the visitors at the beginning of the meeting and let them know to ask questions if they had any.

At least one of the Boy Scouts took him up on the offer a few times, asking excellent questions.

Present at the meeting to express a concern was Montpelier resident Betty Freese. She informed council that she is very frustrated by a snow fence that has been up for months over the summer.

It is bunchy and leaning over onto her property, causing it to be difficult for her to get her bicycle and small mower through a narrow piece of her property.

She had already gone the route of asking Chief Dan McGee to help, which he did try to help but after research it seemed to him there was nothing she could do about it. The chief suggested that her next step would be to approach council.

Council heard her complaint and following some research “on the spot” and some discussion, it was agreed that Attorney Chris Walker will do some deeper research to see if there is anything council can do to help her with the situation. Freese thanked them and said she would look forward to hearing from them.

Approval was given for:

In his report, Village Administrator Jason Rockey informed council of the following:

With no further business, the mayor thanked the visitors for coming, saying that he is especially grateful when the younger generation comes, as someday they will fill those seats.

Council went into executive session to discuss acquisition of property.