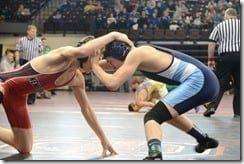 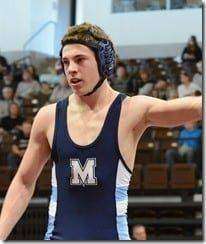 ( R )  Locomotive Senior Sean Taylor earned at trip to the State Meet in Columbus on February 27, 28 and March 1.

BOWLING GREEN: February 22, 2014 – Inside the Stroh Center on the campus of Bowling Green State University at the Division III District Wrestling Meet on Saturday morning, 4 wrestlers in the 126 pound weight class were about to have their seasons ended in stunning fashion.

Montpelier Locomotive Senior, Sean Taylor, entered Saturday morning’s session fresh off a second round loss Friday afternoon to Northwood’s Devon Dunbar (32-8), who would go on to capture the 126 title, in a 12-4 major decision. Taylor won his opening match of the Meet on Friday by gaining a 10-5 victory over Edison’s Alex Neuberger, but in the second round of the Champion Bracket, Dunbar’s major decision brought Taylor to 1-1 and dropped Taylor from the Champion Bracket to the Consolation Bracket.

Taylor’s first match of the Saturday session vs. Western Reserve’s Nate Beal demonstrated the previous evening’s loss was absorbed as a lesson learned. Beal was overwhelmed from the opening whistle as Taylor came out on fire with aggressive shots and an early period takedown resulting in back exposure and a 5-0 lead. The match ended early, with Taylor recording a shutout 16-0 tech fall, and moving to round three of the Consolation Bracket.

Seneca East Sophomore Dalton Blanton entered round three of the consolation match with a 32-10 record, but once again, from the opening whistle, the Senior Locomotive put Blanton on his heels with an immediate takedown and a near pin in the opening seconds of the match. Early in the second period, Taylor, for the second straight match, recorded a shutout technical fall with a 15-0 thrashing. Recording a shutout technical fall on the mat is extremely difficult. Recording two in a row with a wrestler’s tournament life on the line is a demonstration of a senior wrestler’s confidence and focus on the task at hand-reaching the state tournament.

Taylor’s victory placed him in the quarterfinal match of the consolation bracket vs. Edgerton Junior Gabe Santa Rita, who entered the match with a 38-9 record on the season. At stake in the match was an assured trip to Columbus and a match up in the finals of the Consolation Bracket for 3rd and 4th place. (Top 4 Wrestlers in each weight class advance to the State Tournament). Taylor powered his way through the match over Santa Rita, frustrating the Williams County neighboring Bulldog at every point in the match, and earning a hard fought 7-3 win, resulting in Montpelier’s lone state berth of the District Meet.

With a trip to Columbus in hand, the final’s match up with Sophomore Trevor Reed of New London, bringing a 45-10 record into the finals was over in the blink off an eye. Taylor once went on the attack, taking the Soph to his back immediately and recording a pin 26 seconds into the match, capturing a third place finish on the Meet.

Taylor will travel to Columbus on Thursday, February 27 with a record of 35-14, and tremendous momentum heading into the State Tournament. Each weight class at state features the top 16 Division III wrestlers in the state, with the top four qualifiers advancing from the four District meets held throughout Ohio on Saturday. Taylor’s 3rd place finish places him in the top 12 in the state in Division III Wrestling at his weight class, and Saturday’s performance was nothing short of complete domination for the Locomotive Senior.

Also on the mat for the Locomotives in the 160 lb weight class, Sophomore Jordan Birdsall went 1-2 in the tournament, dropping his opening round Championship Bracket match on Friday night to Chance Sonneberg (33-3) of Van Buren in a hard fought match. As the clock drained to zero in the 3rd period, Birdsall came up short, falling in a close 5-3 decision, and dropping the Locomotive to the Consolation Bracket. Wrestling in the 1st round of the consolations once again on Friday afternoon, Birdsall drew Elmwood’s Noah Baker, who entered the District Meet with a 25-16 record on the season. At stake for both wrestlers on the tournament was survival into day 2 of the meet. In the match, Birdsall attacked relentlessly, keeping Baker on the defensive and walking away with a 11-3 major decision, and surviving the opening session.

Birdsall entered day 2 of the tournament in the second round of the Consolation Bracket paired against Monroeville Senior Nick Tommas, who brought a 41-10 record onto the mat. Both wrestlers matched move for move throughout the first period and the second, with Tommas clinging to a 2-0 lead. Tommas got the escape at the start of the 3rd bringing his lead to 3-0, and Birdsall threw everything he had at the senior, but when the clock drained out, Birdsall came up on the short end and with the 3-0 loss exited the District meet. With the loss and elimination for the Meet, Birdsall closed out his Sophomore campaign with a season record of 18-14.

In the 182 lb weight class, the Loco’s Junior Hunter McKelvey brought a 28-18 record into the Meet and was matched with Mohawk Freshman Cole Drapper (29-14). McKelvey wrestled a good match, but Mohawk’s Drapper kept the Locomotive off-balance with an aggressive attacking style. The match logged 5 points on the board for each wrestler midway through the second period, but Drapper was able to put McKelvey on his back early in the third and move ahead, coming out on top 10-5 and dropping McKelvey to the Consolation Bracket. In 1st round consolation action, McKelvey then dispatched Eastwood Freshman Zane Zientek (17-19) at the 3:40 mark in the third period, putting the freshman on his back and gaining the pin to survive and move onto Saturday’s second consolation round.

McKelvey’s second round opponent, Fairview’s Sophomore Chase Carpenter entered the match with a 36-8 record. Both wrestler’s fought smart and aggressive throughout the 1st, but McKelvey got in trouble late in the second when Carpenter was able to put the Loco on his back and gain the pin with 12 seconds remaining in the period, closing out McKelvey’s day and eliminating the Loco from the Meet. McKelvey closed out his 2014 Junior season with a 31-21 record and good momentum heading into his senior season for the Locomotives.

Montpelier as a team, with Taylor, Birdsall and McKelvey’s performances at the BGSU Division III District Meet, placed the Locomotives in 23rd place, out of a field of 52 teams competing. The NWOAL’s Delta Panthers took home the team crown, racking up 280.5 points to outclass the second place team (St. Paul) by nearly 200 points. Also from the NWOAL, Archbold placed fourth with 89 points.

The OHSAA Individual State Tournament will take place in Columbus at the Jerome Schottenstein Center on the Campus of the Ohio State University beginning on Thursday, February 27 with the opening ceremony taking place at 3:00 p.m.