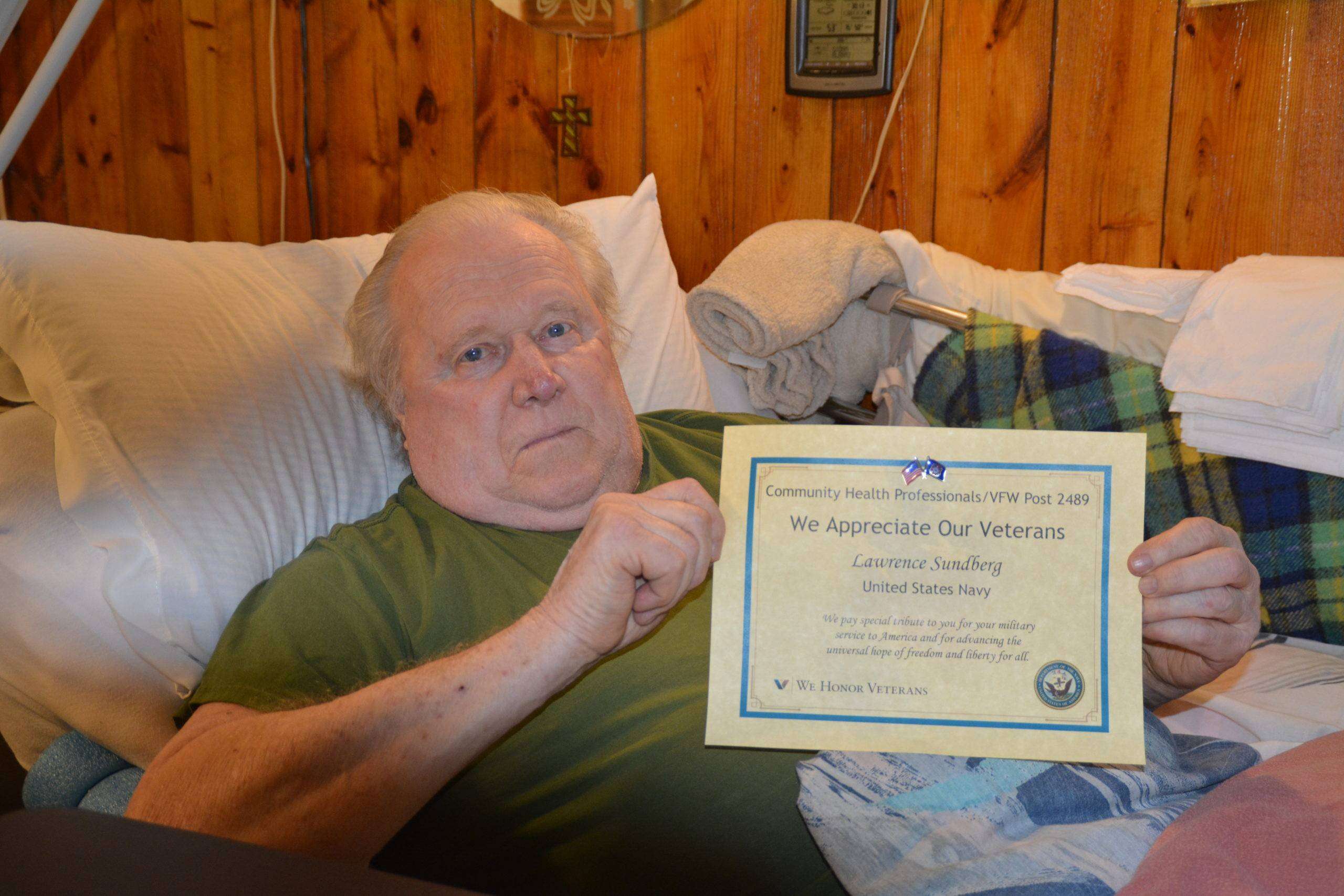 HONORED … Lawrence Sundberg of Nettle Lake (U.S. Navy Ret.) holds the certificate given to him by CHP Hospice of Bryan honoring him for his 24 years of military service. He is a hospice patient and the first person to be recognized in Williams County by the agency.

When Lawrence Sundberg looks back at his life and recalls his time in the military, he finds his happy place.  The 77-year-old resident of Nettle Lake has nothing but fond memories of his 24 years in the Navy and Naval Reserve. The years are among the greatest experiences in life.

Sundberg is now a hospice patient with CHP of Bryan. The agency honored him with a certificate of recognition for his years of service. “He was the first veteran in Williams County to be recognized,” Jan Sundberg said.

Sundberg rests comfortably in his cabin with his wife of 35 years, Jan. They have been together for 48 years after having met while working at Toledo Express Airport. They have a son and Lawrence has two children from a previous marriage.

Born Feb. 1941, in Massachusetts, Sundberg’s father moved the family to Tucson, Arizona, in 1952 and the family planted roots there. He graduated from high school in Tucson in 1958 and by 1960 had joined the Navy.

“I enjoyed it,” Sundberg said of his time in the service. “It is the best experience a young man can have.” He served two tours on different aircraft carriers (U.S.S American and Randolph) and shore duty in Virginia and Morocco. He worked on the landing mechanisms aboard ship that caught the hooks on the bottom of aircraft.

He tried to get into the South Pacific (on a PT boat) to serve in Vietnam, but the higher-ups said he was too valuable where he was. The Navy offered him great training and places to see, Sundberg said.

In North Africa, he worked as part of cargo transport and rescue crew for planes making emergency landings. The field was 200-feet wide and 15,000 feet long. “We served any plane in trouble in the Mediterranean Sea,” Sundberg said.  He enjoyed his time in Morocco as the landscape and climate was similar to Arizona.

One tour on the Randolph, the carrier was on patrol for submarines. The aircraft would go on 4-6-hour sorties from Virginia to Cuba and back.  He got to experience landing on a carrier deck once on a supply mission. When he got near to the ship, it was the size of a postage stamp.

After a circuit to get in position, the approach brought him in quick before a sudden stop. He came to Ohio (Toledo) for the first time in the late 1960s with his best friend who had a sister. Sundberg married her.

Sundberg served on active duty from May 1960 through August 1969. He transitioned to the Naval Reserve because he needed to be home with his wife and family.  Unfortunately the marriage did not survive.

Sundberg served until 1985. He served a total of 24 years. He and Jan had a son together. “I retired a Chief Petty Officer, E7,” Sundberg said.

At the Toledo Airport, he worked for 28 years as a crash rescue worker and police officer. Jan worked for in-flight food service and that’s where they met. She would make him tea on his breaks.

Jan occupies a special spot in his life. He calls her the “best wife I could ask for.” The pair have been married for 35 years, but dated for 13 years while his children from his first marriage grew up.
They came out to Nettle Lake in 1989.

Lawrence retired in 1999 and the pair became snowbirds, wintering in Arizona. In 2015, they became full-time residents of Nettle Lake.
“It’s beautiful here in the winter,” Jan Sundberg said.

As he recalls his time in the military he recommends the young people of today spend a four-year hitch in the service, regardless of the branch. He appreciated the education he received in hydraulics and electrical.

“It’s the greatest experience in the world,” Sundberg said.