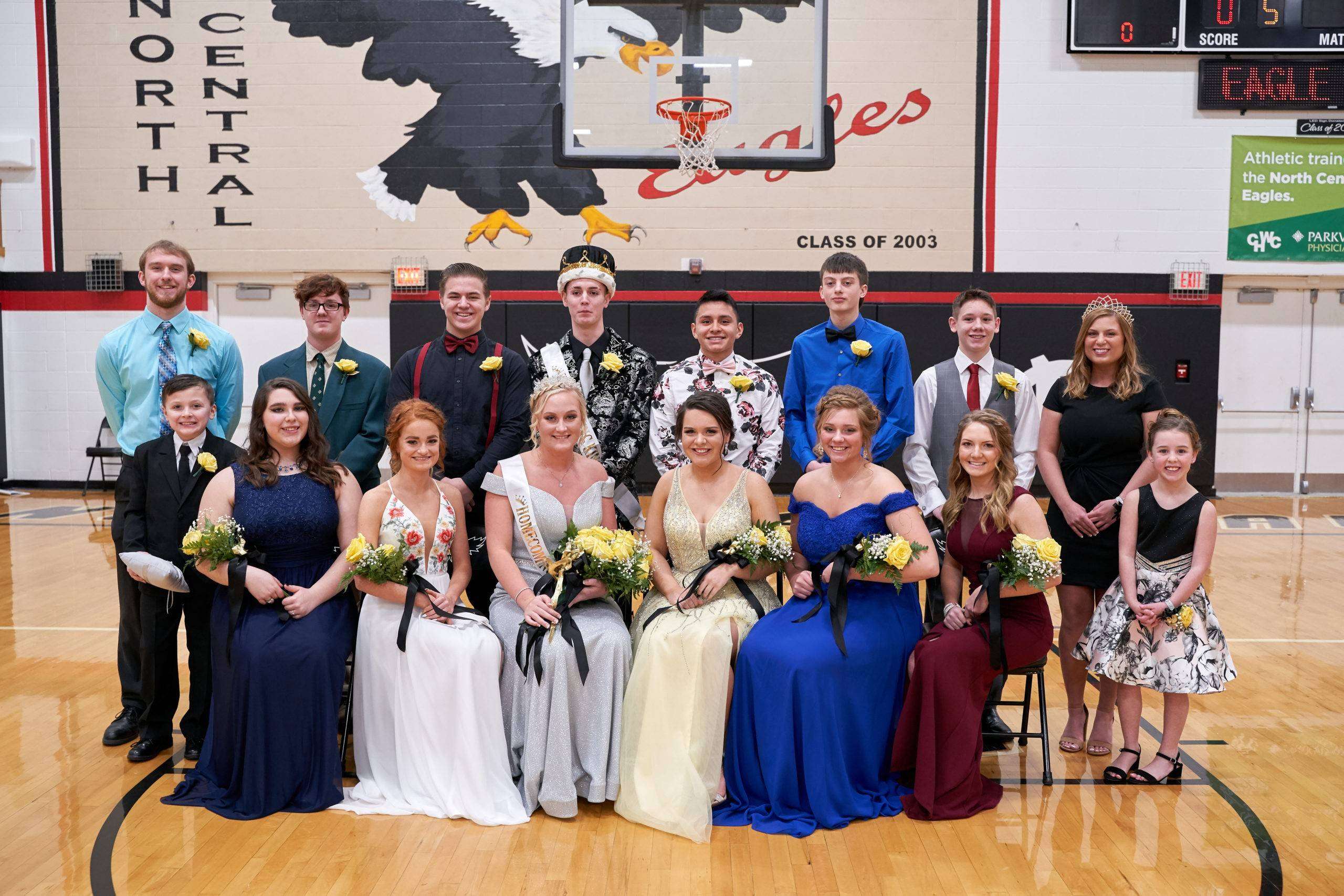 Homecoming Night brings about an evening of special ceremonies, special events, and above all, special memories that will last a lifetime. North Central High School is no exception to the rule, and on the evening of February 1, The Eagles’ Nest was rocking in anticipation of what would be a magical evening in Pioneer, Ohio.

Shortly after 5:30 p.m., the gymnasium lights dimmed, and the music began to crescendo for the introduction of the 2019-2020 North Central Homecoming royalty.

First into The Eagles’ Nest for Homecoming Night were freshmen attendants Rea Beck and Quin Burt. Rea is the daughter of Amy Beck and the late Robert Beck. Rea’s brother, Remington, was a 2018 graduate of North Central. Rea is involved in SOAR, Student Council, FFA, and is the Freshman Class Vice President. Rea also finds time for dance outside of school. She plans to attend college to pursue a career in the medical field.

Quin Burt is the son of Kati and Ryan Burt. Quin’s siblings include Joe in 8th grade, Anna in 5th grade, and Emmi in 1st grade. Quin is active in basketball, baseball, track, football, and cross country. Quin is also a member of student council and active in St. John’s Lutheran Church. Quin plans to attend college after high school in an undecided career path.

The sophomore attendants for the night were Raina Cox and Ethan Currence. Raina Cox is the daughter of John and Jenny Cox. She is involved in band and SOAR, and her plans after high school include living her life to the fullest and being happy.

Ethan Currence is the son of Dustin Currence. Ethan’s siblings include Sky, an 8th grader at North Central, and Logan, a junior at North Central. Ethan plans to obtain employment in the community after graduation to help provide for a family.

The junior attendants for the evening were Kendee Hollstein and Tyler Moll. Kendee is the daughter of Mike and Heather Hollstein. Kendee’s siblings include Addison, a graduate of North Central High School, Makenna in 9th grade, Emerson in 4th grade, and Michael in Pre-K. Kendee is an active participant in softball, basketball, and volleyball. She is a member of SOAR, student council, FFA, and the musical, and plans to attend college for nursing.

Next to enter were the three candidates for Queen and King, the first being Eryn Shaw and Michael Cummins. Eryn is the daughter of Jamie and Elli Altaffer. Eryn’s siblings include Wyatt Altaffer, a Sophomore at North Central, and Seth Altaffer, Travis Altaffer, and Keely Shaw, all of whom have graduated. Eryn is active in cross country and cheerleading. She is also the senior class secretary, a member of the musical, In Flight, SADD, and SOAR. Eryn works at Hillside Country Living, and after high school, she would like to attend a university to pursue a degree in Gerontology and Psychology.

Michael is the son of Kevin and Kelly Cummins. His older sister, Jessi, is a graduate of North Central, and his younger sister, Sami is in 8th grade. Michael is active in basketball as well as band, In Flight, the musical, National Honors Society, and FFA. Michael currently works at Cummins Farms. He plans to attend Northwest State Community College to pursue a degree in business.

The next Queen and King candidates to enter were Taylor Fenicle and Jack Bailey. Taylor is the daughter of Tobi Fenicle and Nikki Mittelstaedt. Taylor’s sister, Allyson, is a sophomore at Huntington University. Taylor is active in basketball and volleyball, and is the senior class president and the president of North Central’s FFA chapter. Taylor is also a member of SOAR, Student Council, National Honor Society, and the musical. Taylor plans to attend the University of Findlay to study nursing.

Jack is the son of Jason and Brandie Bailey. Jack’s siblings include Morgan, Jordan, and Josh Bailey. Jack is active in basketball, baseball, golf, and cross country. Jack is also a member of FFA, OARS, Student Council, and the musical. Jack currently works for JB3 Custom Apparel as the lead printer and designer. After high school, Jack plans to become a successful entrepreneur.

The final candidates for Homecoming King and Queen were Emilie Eustace and Manny Cruz. Emilie is the daughter of Trent and Becky Eustace. Emilie’s sibling is Sophie, a fifth grade student at North Central. Emilie is the Varsity Cheer Captain and vice president of the senior class. Emilie is also active in the musical, the Fellowship of Christian Athletes, National Honor Society, and SOAR. Emilie works for Blue by Atlas Bridal. After high school, she plans to attend college to major in biochemistry and minor in women’s studies, focusing on pre-medicine.

Manny is the son of Manuel and Pamela Cruz. Manny’s siblings include Mireya in 8th grade, Martha in 4th grade, and Miguel in 1st grade. Manny is active in basketball, track, and cross country. He is also a member of SOAR, Spanish Club, Student Council, and the musical. Manny plans to pursue a degree in business and finance at Bowling Green State University upon graduation.

Next to make an entrance was Flower Girl, Carissa Martin, and Crown Bearer, Brock McClanahan.  Carissa is the daughter of Erika and Shane Martin. She is a second grade student in Mrs. Beck’s class, and the sister of Thane and Ashlyn Martin. Carissa loves to play outside, and wants to be a teacher when grows up.

Brock is the son of Brock and Ivy McClanahan. Brock’s siblings include Brooke, a Freshman at North Central, and Lily, a 6th grader at North Central. He is in Mrs. Kizer’s second grade class. Brock enjoys playing video games, and when he grows up, he wants to be logger like his dad.

The spotlight returned to the gym entrance for the arrival of reigning Homecoming Queen and King, Addie Elser and Hayden Haas. Addle is currently attending the University of Toledo for speech pathology, and Hayden is working on a degree in engineering at Trine University.

With the Homecoming Court in place before the awaiting audience, the long awaited announcement was finally made. The 2019-2020 North Central Homecoming festivities would be presided over by Homecoming Queen and King…Taylor Fenicle and Jack Bailey.

The spotlight was trained upon center court as the new Queen and King were crowned by retiring royalty Addie and Hayden. Cameras clicked and flashes popped as the new royal couple posed for pictures.

The lights came up, and the pregame warm-ups soon got underway for the Eagles, and their visitors for the Homecoming game, the Delta Panthers of the NWOAL. The game made the magic of the evening complete as the hometown boys turned away the challenge of the visitors by a 41-32 score.