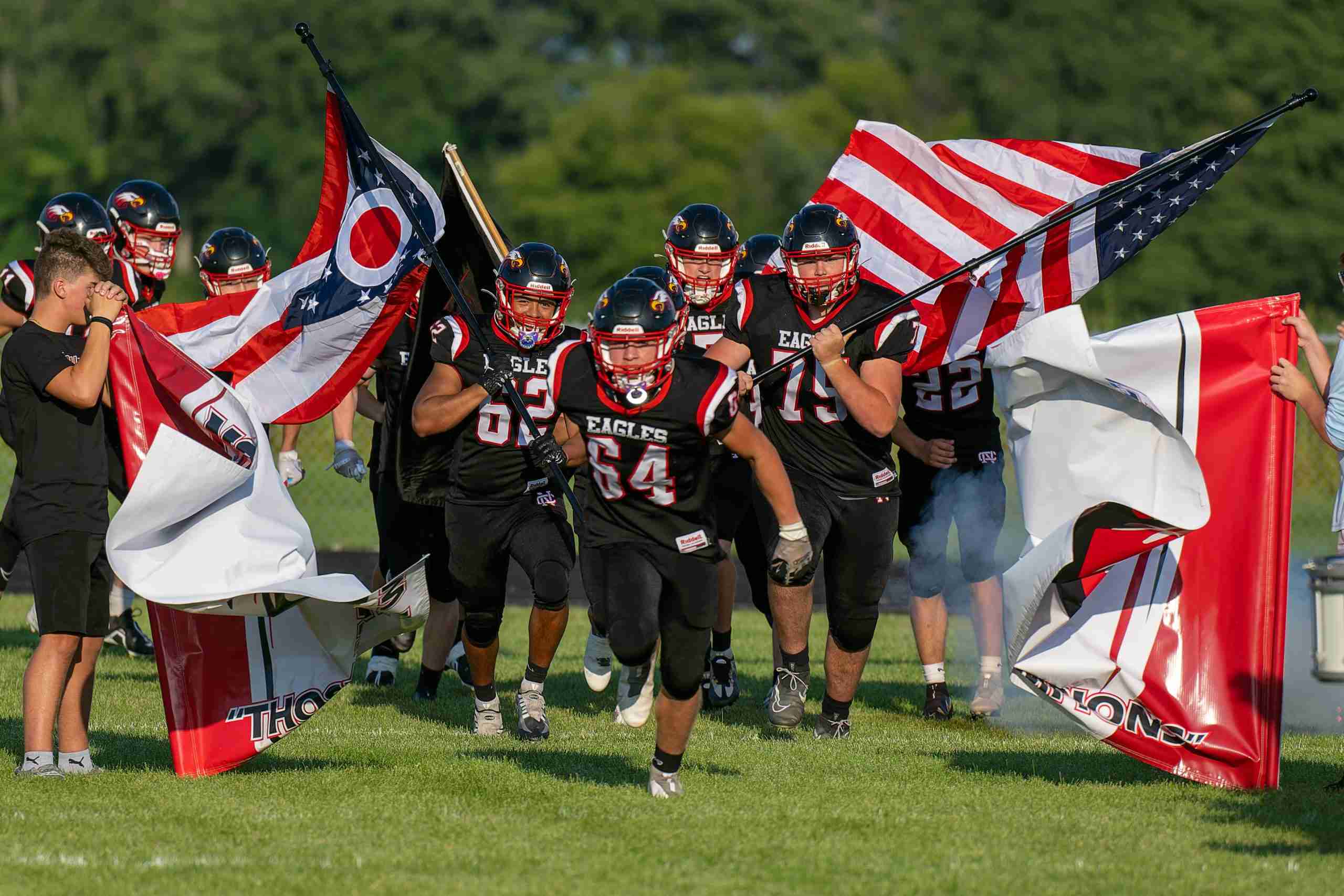 GAME TIME… The North Central football players break through their sign for the first time as Varsity players. (PHOTO BY JACOB KESSLER, STAFF)

Friday Night Lights is a weekly Fall event that most towns are able to experience in America today. It is a night of fun and community where a large number of people come together to support the kids in the community while also having a good time.

The origination for the term “Friday Night Lights” is hard to pinpoint exactly, but it most likely originated in Texas before becoming famous in the 1990’s.

Fast forward to 2022 and this term is still going strong. The town of Pioneer has heard this term and has long awaited the day they would be able to experience it for themselves on their own turf.

Head coach Scott Thompson explained that this day was ten years in the making. “The Eagles youth football program started close to ten years ago with elementary football.”

“The game was played from third grade to sixth grade and led up to the school programs. There has been a developmental program going on here for around ten years.”

“Parents got together and felt like it was something we should be doing, and each one had an interest in our youth.’

“It has taken this long because we did not feel like sending our kids out on the field without any skills. The school had never had football before, so we needed to make sure they were ready.”

In addition to the number of students and education for students to ensure their ability on the field, the school has also had to work on a schedule for this year.

North Central is not a part of a conference this year as the BBC is a non-football conference. The school is operating independently for games and will be facing a competitive schedule.

“The schedule for this year will be competitive but I am enthusiastic that we will execute the best we can and will hang in the games. Our staff will do a good job and we will be challenging to our opponents for victories every Friday night.”

“We will be disciplined and enthusiastic. We’ve talked to the kids about being able to cope with sudden changes in the game like fumbles and interceptions.”

“A big play that is run against you, you cope with it and get ready for the next play. It is the difference between a rookie and a veteran and as rookies in Varsity we will be learning some of this,” said Coach Thompson.

Before the game, the expectation and excitement was as high as it could be. “I think generally speaking the students, staff, kids, and community members have been preparing for this for a few years. Everyone is just excited to start the Friday Night Lights tradition.”

This feeling was even more noticeable on Friday night during the game. The parking lot at the school was filled and spectators filed in constantly before the start of the game.

Children were given a red bell as they entered, and lawn chairs filled the grass area throughout the length of the field. Once the game was started it did not take the Eagles long to put points on the board.

After scoring the first time, and each other time after, a firework was launched into the sky to show even more pride and celebrate the score.

Cheerleaders cheered on throughout the night and the band played before the game and during half time. It was the Friday Night Lights experience playing out at North Central for the very first time.

It was made even better at the end of the night when the Eagles closed out the game with Woodmore with a win. The game’s final score was 24-0 after a strong presentation from both the team’s offense and defense.

“It’s always great to get a victory. Our kids played with a lot of emotion tonight. It was a big game for them being our first varsity game ever here at this complex.”

“Woodmore is not a slouch, they play in a very very tough conference, so we knew coming in it was going to be a slug fest. But we just came on the field, and we played really hard and I’m really proud of these kids,” said Coach Thompson.

The first ever Varsity game at North Central could not have gone much better. A fantastic win with a tough school shows how ready this team is for their upcoming season.