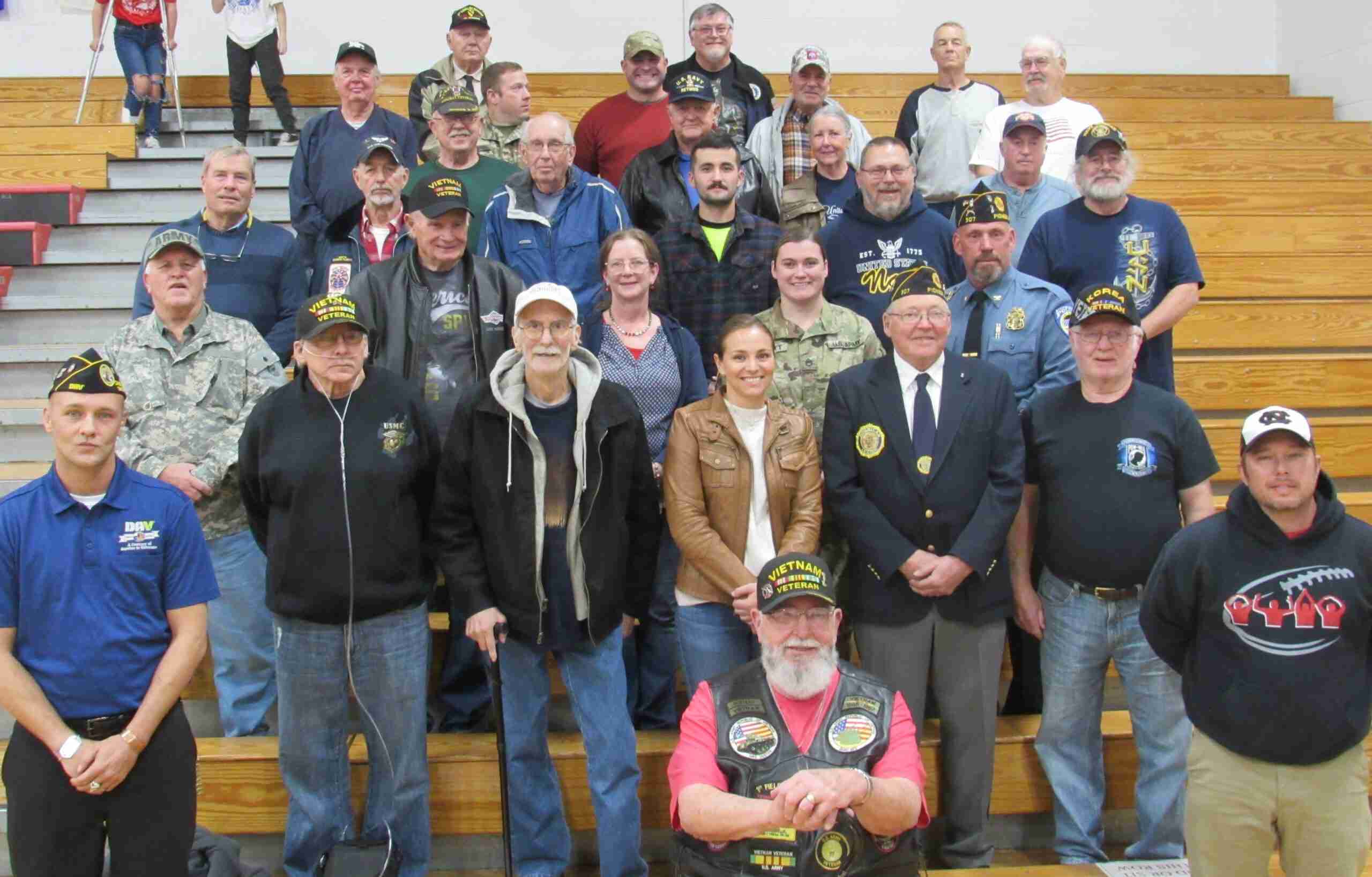 NORTH CENTRAL VETERANS DAY ASSEMBLY … All veterans that attended the performance line up for a photo. (PHOTOS BY LACIE FISH, STAFF)

On Veterans Day we honor all, who answered to a service call.

Some have lived while others died, and all of them deserve our pride.

We’re proud of all the soldiers who, kept thinking of the red, white, and blue.

They fought for us and all our rights, they fought through many days and nights.

And though we may not know each name, we thank ALL veterans just the same.

North Central school holds a veteran’s assembly every year to honor those who have served our country, and this assembly is fantastic.  If you have never been able to attend, I suggest you try too at least once.  Crystal Gillaspy, the school’s music teacher, puts together an amazing performance with the kids to honor veterans.

The first thing that was done in this assembly was colors being posted. (The Posting of Colors is a practice conducted by military color guards of the United States at the beginning of a particular ceremony.  Posting the colors requires that a color guard team move the colors (usually the American flag, the state flag, the service flag, and the unit flag) from a carried position and be placed into a stand.

Ms. Gillaspy then welcomed the crowd, and everyone said The Pledge of Allegiance.

The HS Choir sang the Star-Spangled Banner.  And these kids sounded incredible.  Gezzy, a student involved in the presentation,  then did a veterans day welcome, and it was time to start the show.

The entire group sang “Thank a Vet,” and then the 1st and 2nd grade sang “I Love My Country” while doing sign language to the song.

While all of this was happening, a slide show of veterans was playing on two screens on either side of the bleachers. The group then sang “On Veterans Day,” and the 5th and 6th grade sang “The Brave.”

There was a Service Medley where the children sang the corresponding song for each military branch.  When they would yell out that branch’s name, those in the audience that served for that specific one would stand up, everyone would clap for them, and the children would salute them—personally, one of my favorite parts of the entire thing.  The 3rd and 4th grade then sang “One Nation,” and Briggs, another child involved in the show, did a thank you to all.

The final group song was “America Me and You,” and then it was time for Ms. Gillaspy to do her thank you.  She was incredibly proud of the kids and the hard work they put into the show.  The children and everyone in the crowd then sang “America the Beautiful,” the colors were removed, and senior Josh Budd played “Taps.”

I am so happy that I was able to attend this fantastic performance.  To all the kids involved, you all should be incredibly proud of yourselves for all the work you put into this.  You sounded amazing.  And to Ms. G., this is a marvelous thing that you do, and I’m sure the community agrees with me.

To our men and women in uniform, past, present, and future, God bless you and Thank you. 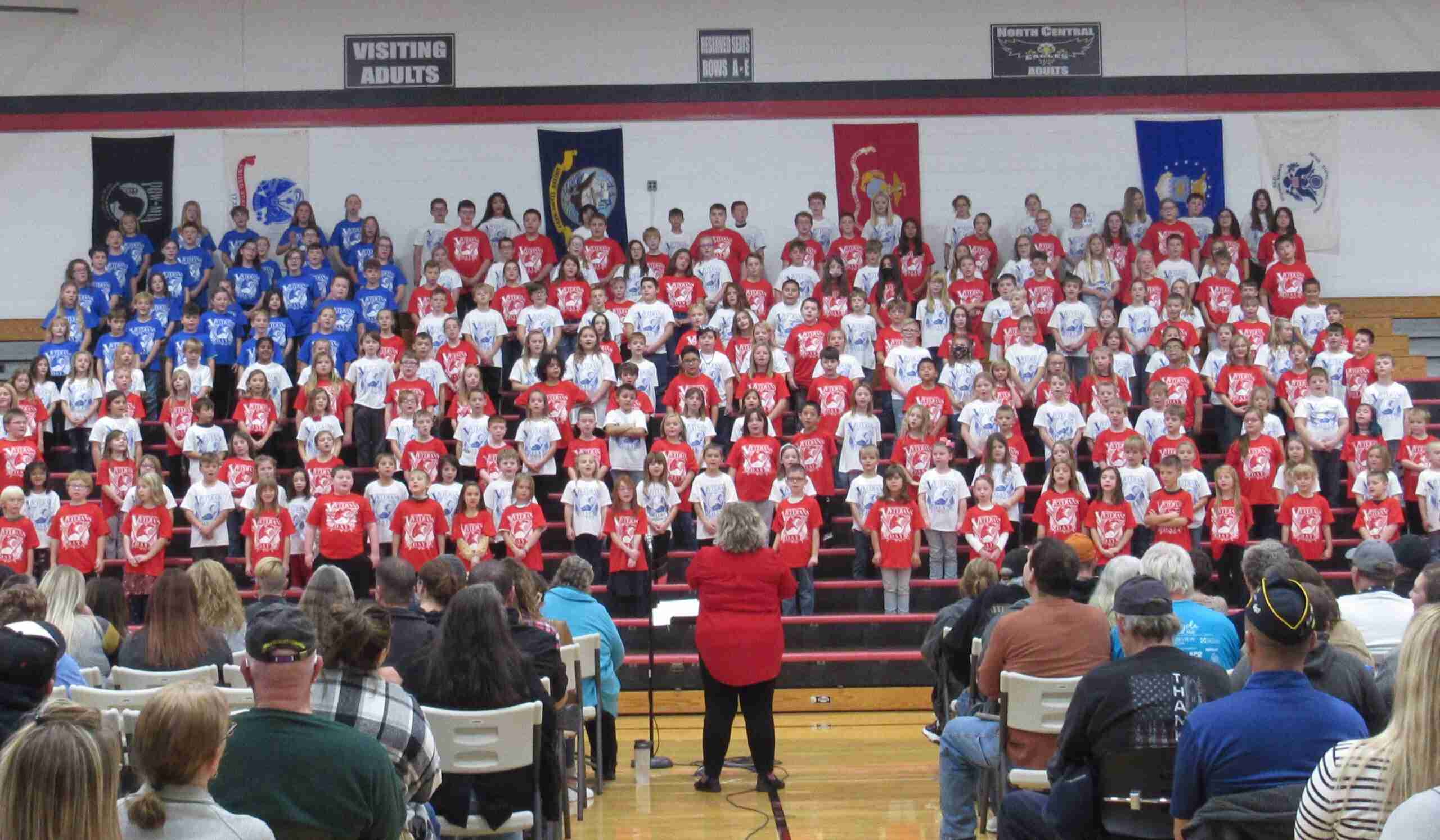 NORTH CENTRAL VETERANS DAY ASSEMBLY … Children line up on the bleachers in red, white, and blue to look like the American Flag.