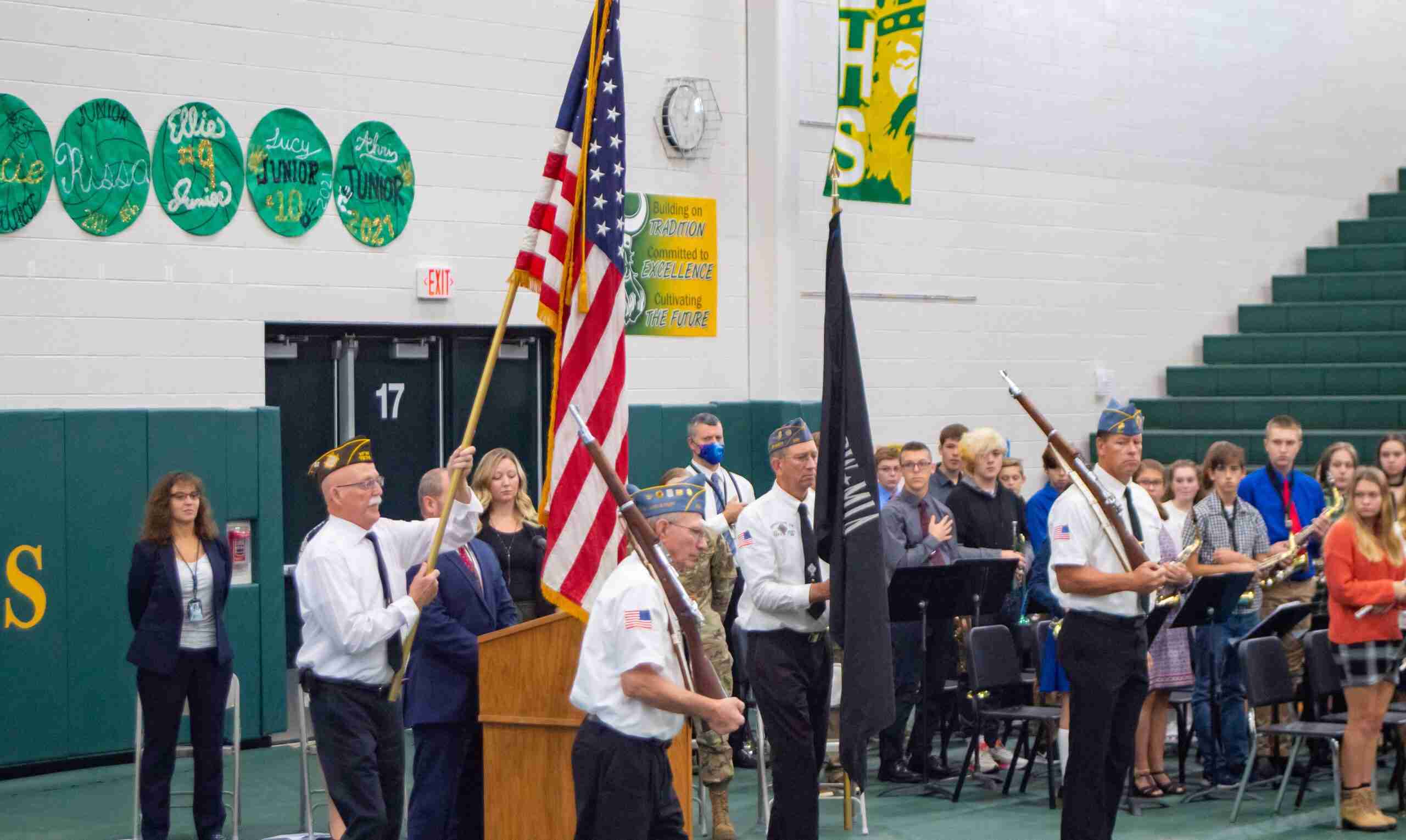 The Evergreen Local School District held a Veterans Day assembly on Thursday, November 11th. The assembly took place at the Evergreen High School in the gymnasium.

Students in grades 1 through 12 were brought into the gym for the assembly that was open to the public. Numerous Veterans were welcomed in and were given small flags before being seated.

Mrs. Conrad then continued on with the assembly and said, “America was founded on the principals of liberty, opportunity, and justice for all.”

“On Veterans Day, we recognize the men and woman of our Armed Forces who have defended these values throughout our nations history.”

She then introduced members of the Evergreen High School Student Council as they came up to discuss facts regarding the holiday and why it is celebrated as Veterans Day.

Many facts were spoken of regarding the holiday. One such fact that was talked about was the beginning of Armistice Day after World War I.

World War II and the Korean War led to Veterans Service Organizations urging Congress in 1954, to change the word Armistice to Veterans, in order to celebrate the sacrifice of all those who participating in all wars.

The Young Vikings Choir, which includes students in grades 3 through 5, then sang the song Grateful for everyone under the guidance of their music instructor Jonathan Torrence.

The first guest speaker was then introduced. Airman Korah Overfield, who graduated from Evergreen in 2020, is now a member of the Ohio Air National Guard. She currently works in logistics and supply chain at the 180th Fighter Wing.

Korah spoke to what led her to the military in the beginning. She gave insight into her experiences during boot camp and what everything has been like for her since.

“I never pictured myself in this uniform today. I have many people in the military in my family, never did I figure I would be one of them,” said Korah.

She continued on and talked about how she felt after joining the Air Force. “My job is so much fun.  I finally felt like I had a sense of direction as the military helped guide me into the person I am today.”

Devyn Rogers was then introduced as the second guest speaker. Devyn was also a graduate from Evergreen as a member in the Class of 2006.

Devyn spoke about how, when she was 17, she walked right out the doors of the high school to her recruiter who was outside waiting for her, to go and start basic training for the Army.

After spending all summer in basic training, she finished just days before having to return to school and begin her senior year of high school.

She started her speech with, “I will always place the mission first, I will never accept defeat, I will never quit, I will never leave a fallen comrade. This is the Warrior Ethos; it is words that every soldier lives by.”

“It defines who we are as soldiers and who we aspire to be.” She continued on by taking a trip down memory lane.

She talked about her reasons for joining the military and how her experiences at Evergreen, and the staff there, shaped her decisions and who she is today.

A presentation took place next, by senior art studio students and the Viking Voices. A mural was painted live in front of everyone that depicted the Raising of the Flag on Iwo Jima as the Viking Voices performed the song Battle Hymn of the Republic.

Viking Voices then also performed the song, Armed Forces Salute followed by The Red, The White, and The Blue being performed by the 8th Grade Band.

Dr. Dolores Swineford was then introduced to honor the fallen service members. “While we are here to thank our veterans for their time and dedication to our country, it is only fitting that we take a moment to honor those who made the ultimate sacrifice for our country,” said Dr. Swineford.

The song Taps was then played on the trumpet by the Band Instructor Chris Lyons during a moment of silence. Jonathan Torrence and the Young Vikings Choir then performed their last song called We Say Thank You.

Superintendent Eric Smola was then introduced to say a few words. “Today it is our privilege to say thank you to America’s Veterans.”

“To the ordinary people who have made extraordinary commitments so that we may enjoy the freedoms that we treasure. Thank you, Veterans, for your service to our great country,” said Mr. Smola. Everyone then stood for the retiring of the colors. 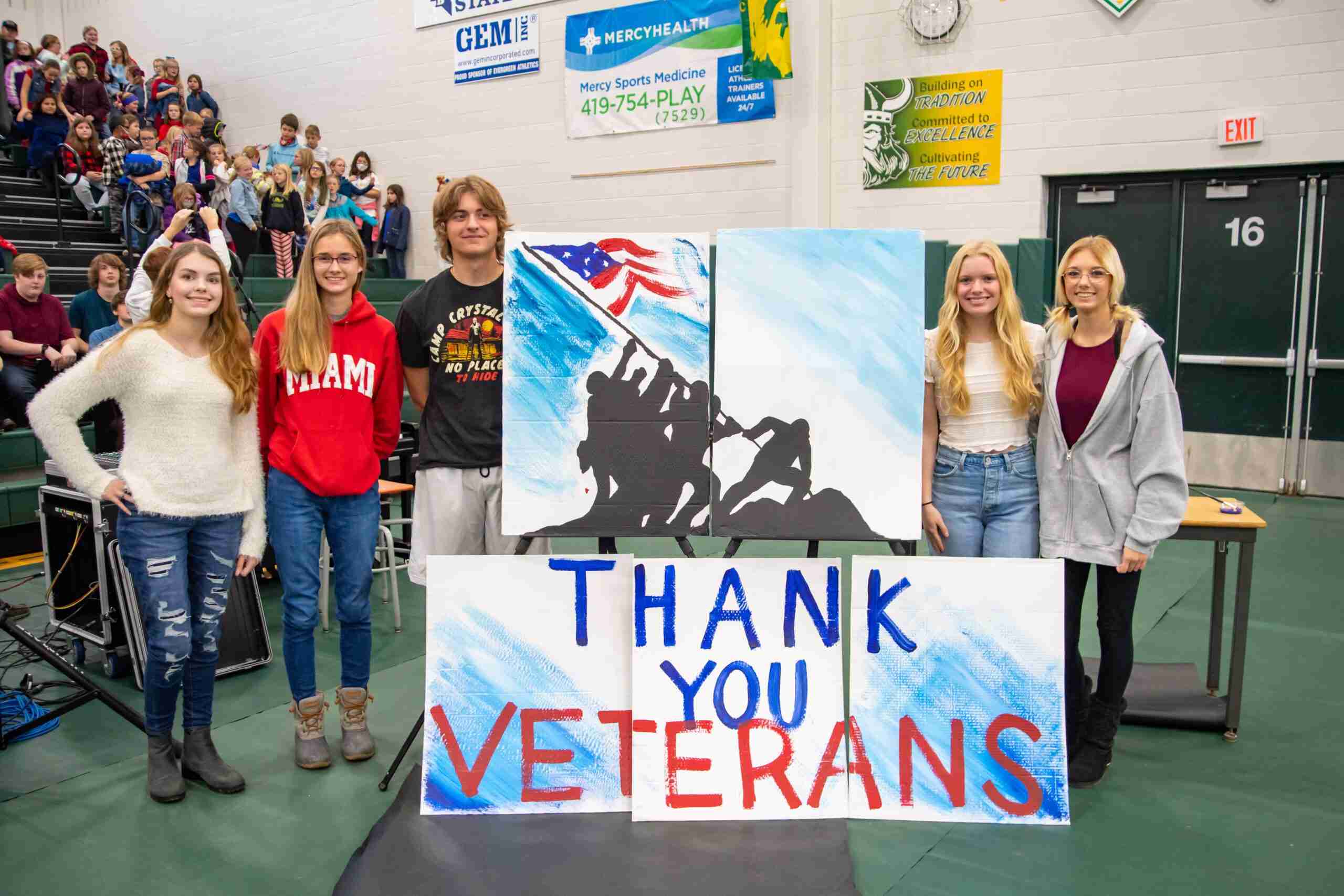