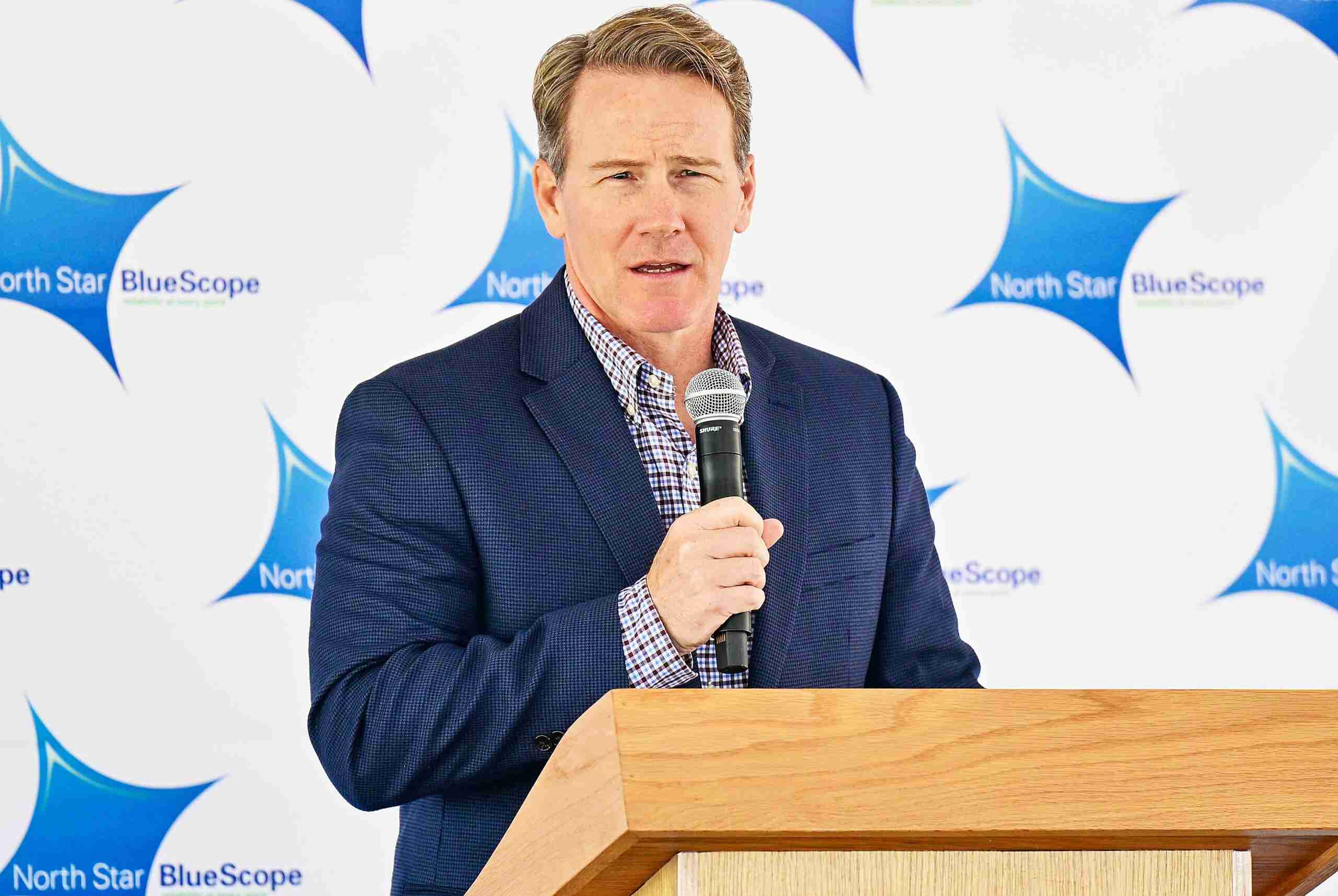 LIEUTENANT GOVERNOR … Lieutenant Governor Jon Husted, the events keynote speaker, took to the podium and talked about the expansion project for North Star BlueScope and why it is important. (PHOTOS BY JACOB KESSLER, STAFF)

North Star BlueScope Steel in Delta held an opening ceremony for the expansion project they have been working on since 2019.

The ceremony took place on Monday, May 9th at 12:30 p.m. in front of the building. Numerous dignitaries attended the event including Lieutenant Governor Jon Husted, representatives from Senator Sherrod Brown and Senator Robert Portman’s offices, the Fulton County Commissioner and others.

BlueScope’s board of directors also traveled from Australia to the US to attend the event. They had previously toured the site in 2019 prior to the Covid pandemic which had then hampered travel efforts.

The expansion project is significant for the company as it cost $700 Million and has created more than 100 new jobs.

It will also increase the plant’s annual production of hot-rolled coil by 950,000 net tons. Numerous individuals present were able to speak including the Lieutenant Governor who described the investment made by BlueScope as a big deal.

“When you make a $700 million investment, that’s no small deal, that’s a big deal. You can’t just pick up a steel mill and move it if things don’t go right.”

“And so, the reassurances from the State of Ohio and local economic development officials, particularly regarding energy, were very important to North Star’s decision.”

“We appreciate the collaboration between the company and our state officials to make sure we could sort out all those issues.”

Representatives from the Senator’s Offices also read letters from each Senator who was not able to be in attendance.

At the end of the ceremony, BlueScope’s CEO and Managing Director Mark Vassella unveiled a large, framed photo of the mill.

In closing, he also announced that the team at North Star earned the CEO’s Health and Safety Excellence Award for 2021.

At the events conclusion, attendees were given an opportunity to join a detailed tour to see the new buildings. 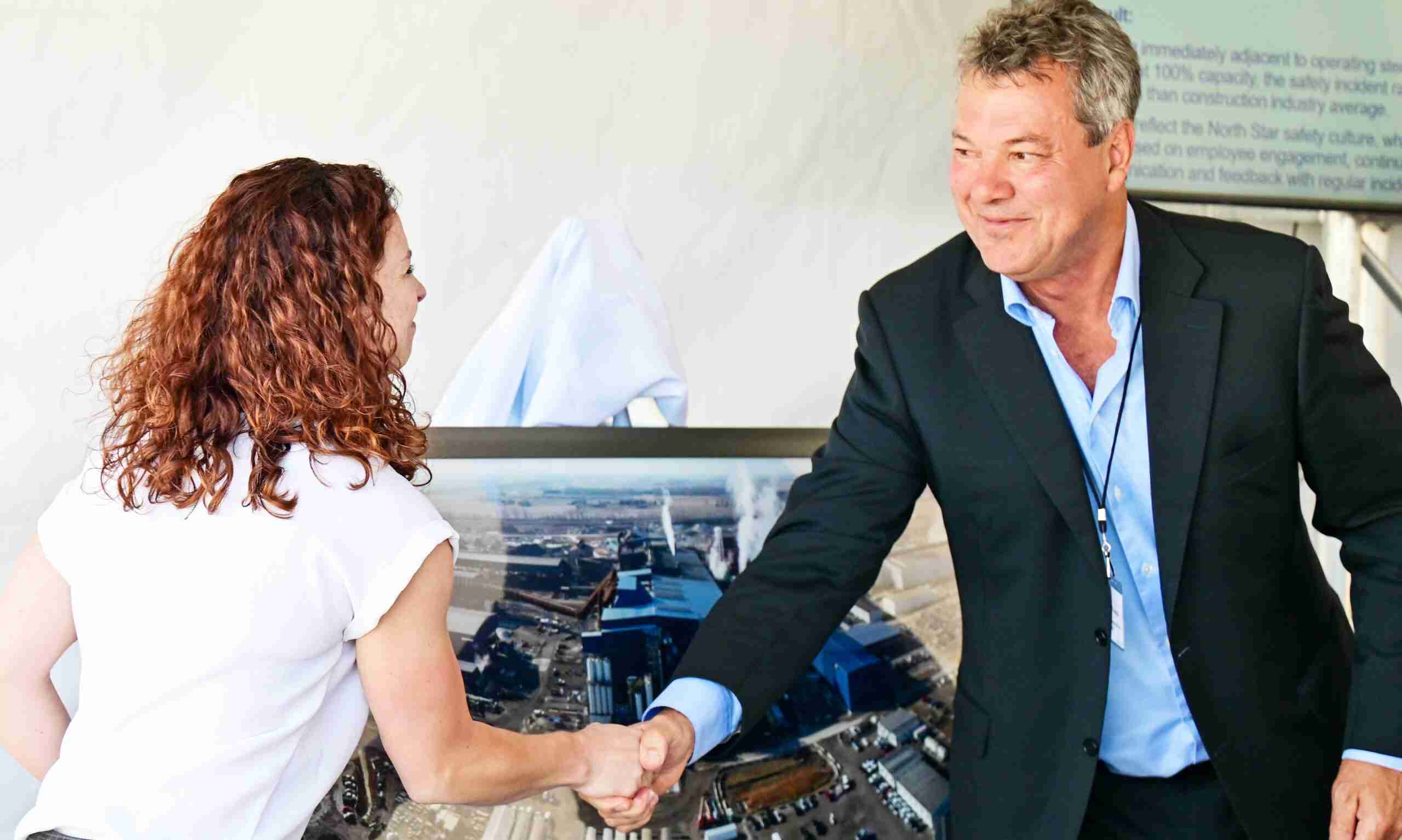 UNVEILING … BlueScope’s CEO and Managing director Mark Vassella and Executive Assistant Kirsten Fruchey pull back the sheet on the framed photo commemorating the event before then shaking hands.

During an interview with The Village Reporter, Lieutenant Governor Jon Husted explained that the company completing their expansion is incredibly important.

“There is going to be more than a hundred jobs. These are high paying manufacturing jobs, and the product, the steel product is an important part of the supply chain for other businesses in the Midwest such as Ohio and Michigan.”

The Lieutenant Governor also explained that the job market in Ohio is greatly expanding and that more jobs are available then there are people to fill them.

“In Ohio right now we are creating jobs faster than we can find people to fill them.”

“So, we have nearly three and a half jobs that pay $50,000 a year or more for every one person on unemployment in Ohio.”

“You’re going to continue to see, with the Intel investment and these kinds of investments that were talking about today, not only job creation but great job creation. Jobs that pay over $100,000 a year that will lift the fortunes of everybody in our State.”

With numerous companies announcing plans to come to Ohio or expand what they already have in the State, and the completed expansion project in Delta, it is safe to say that manufacturing and industry in general are not only making a comeback in Ohio but are thriving.