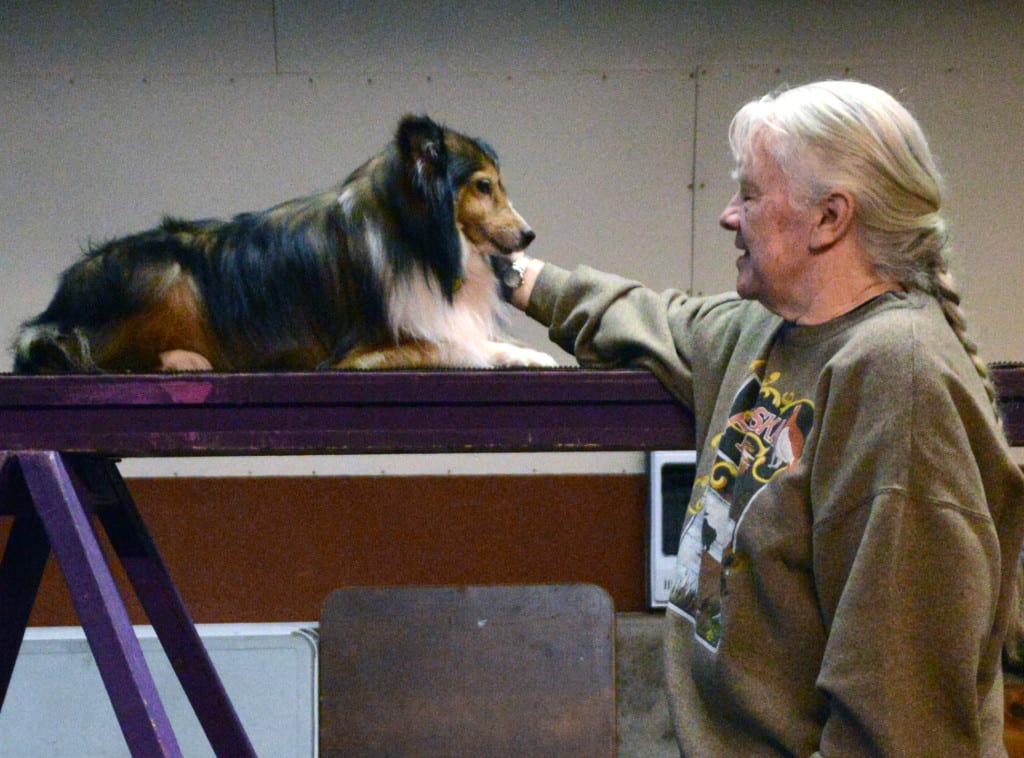 Dog training, like any sport, requires a great deal of time and motivation.

Whether one is attempting to instill obedience in their animal, or trying to raise a championship caliber show dog, the core value one must have to succeed is the same.
“It’s a commitment.” Sal Mansell, co-owner of Northwest Ohio Dog Trainers stated. “You can’t just run around one week, but not the next.”

Few people would understand how much of a commitment competitive dog showing truly is better than the Mansells. Along with her husband Pete, the couple has been helping residents of Northwest Ohio train their dogs since the fifth of May, 1992, when they opened the doors of their Montpelier training facility.

The road to making that business venture was a long one, and it began in Great Britain. Calling the island nation home, Pete and Sal met under circumstances one might not guess, given their current profession.

A choreographer by trade, the need to instruct was always present within Sal. Actually, it was in these years that she realized her desire to train.

“I love teaching.” She said of her experiences in choreography.

Pete was invited into Sal’s world when she needed a pianist for her work, a trade in which he was quite skilled. The two fell in love and wed. It was shortly thereafter that they began to show dogs competitively. This was a new experience for the former pianist.

“Pete had never shown animals before he met me.” Recalled Sal.

Years later, it was the chance to expand upon their work with animals that brought the Mansells to the United States in the 1980’s. At the time, the importing and exporting of animals such as dogs was forbidden in the United Kingdom, in order to contain diseases spreading through them in other countries at the time.

“We liked the opportunity of wildlife and dog shows.” Sal remembered. “It’s so vast.”

After traveling around the various states for a bit, the Mansells came upon Ohio in 1986, settling in Pioneer three years later. Not too long afterward, the questions started to come.

“People kept asking us, ‘How do we do this (with our dog), how do we do that?’” Recited the former dance teacher.

Eventually, the pair decided that they would simply open their own dog training business, and thus, Northwest Ohio Dog Trainers was brought into the world. Since then, several highly regarded dog show competitors have passed through its doors, including the top ranked kid in the nation at one time.

In fact, two of the top competitors in the State of Ohio currently do their training the Mansells. Sixteen year old Emma Brown, a Pioneer native, shows with her Shih Tzu in the toy group. Together, the pair have reached elite status at the state level, and is rising up the national rankings as well. Meanwhile, Montpelier’s own Trinity Altaffer has displayed that neither experience of the handler nor breed of the animal have to hold back a competitive duo from excelling on a big stage. At just thirteen years of age, Altaffer has been training her mixed breed through Northwest Ohio Dog Trainers for roughly a year, yet has also found great success in both the state and national rankings.

Of course, the sport is not just for the young. After two years of training his Chesapeake Bay Retriever, seventy-eight year old Lyle Shoupe, of rural Montpelier, and the dog were awarded Second Level Obedience during a national competition in Kalamazoo, Michigan. They are also just a few points away from winning an Ability Championship.

Shoupe, like many other clients of Northwest Ohio Dog Trainers, has a unique bond with the Pete and Sal.

“He spends a lot of time with us,” Sal claimed, “helping us set things up and cleaning.”

Indeed, many of those who seek training from the Mansells feel a tight connection with the British-born couple.

“We’re a family.” Said Sal of their customers.

That family is well over thirty strong. The trainers have twenty-two members who are fully invested in competitions, and thus receive the maximum degree of training. However, the Mansells also offer a beginners’ course, which mostly handles typical obedience issues. Though they aren’t apt to turn people away, they would like to keep the numbers for that class a bit lower.

“We try and max out at twelve.” Sal announced.

That is hardly a problem, as the facility offers its services year round, a fact to which Sal can attest.

Classes are taught by the couple every Thursday continuously throughout the Seasons. The only thing that may prevent a class from taking place in inclement weather. Given the distance the Cooney-based couple have to traverse to open their place of business, that is understandable.

An important thing to understand in dog training is that animal is not the only one being trained. This is particularly true when training a dog to be shown, due in large part to the movements required to keep pace with the animal.

“It’s not just the dogs your teaching.” Sal confessed. “It’s the handlers you’re teaching as well.”

Overall, training a dog, professionally or otherwise, involves a change of perspective, according to the Mansells. It has to be considered a member of the family, and treated as such. That also means the dog, like any other family member, has his place. Making this change involves training with love, rather than treats or discipline.

“You have to be the best thing in that dog’s life.” Proclaimed Sal.

And getting to that point requires a great deal of time and motivation.