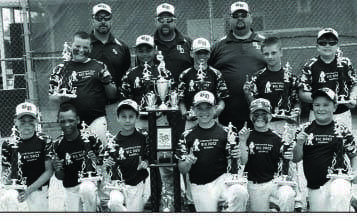 The Northwest Ohio Big Dogs 10u team captured the 10u Nations “Gold” Ohio State Title with a convincing 8-3 win over the top seeded Cincinnati Weststars in Pickerington on June 18. Five members of the team hailed from Williams County… four from West Unity and one from Edon. The Big Dogs were seeded #10 in the gold bracket after a round of pool play games. The road to the title was long and arduous. In order to advance, they had to upset the #7 seed, the #2 seed, and then the #3 seed to make it to the championship game where they played the Weststars for all the marbles. Challenge issued…challenge accepted. First up on the hit parade for the local boys was the tournament opener against the Raiders of North Columbus, who were dispatched 8-6 on June 15. The following day, the Big Dogs took a bite out of the Olentangy Thunder, 12-11. On Saturday, June 17, the Blakeway Titans and the Big Dogs went toe-to-toe in a slobberknocker that saw North West Ohio prevailing by an 18-13 score. Later that day, the Licking County Settlers were knocked off by the Big Dogs, 6-5. The semifinal match of Sunday, June 18, saw Northwest Ohio tangling with the Garland Eagles for the right to advance to the championship game. The Big Dogs’ offense again rose to the occasion, posting a 9-6 win that sent them to the title game and the Ohio State championship.

The boys of the Big Dog squad first played together in 2016, and went 10-12 for the season. The 2017 Big Dogs ended their season with a 20-4 record, the Nations Ohio State title, and the #4 ranking in the nation. Along the way, they took home the Nations Perrysburg Select Classic Championship, the runner-up title in the Nations Carter Park Classic, and third place in the Cody Brown Memorial Tournament. To go from a sub-.500 team to the top team in Ohio and the fourth ranked team in America is an incredible feat, and Head Coach Eddie Robison of Pioneer had a ready answer as to how it came about. “Growth and maturity,” he said, adding, “If you would have told me that we would have come in and won 20 ball games this year and won the Ohio State Tournament, I wouldn’t have believed it. We were 1012 last year. We committed 92 errors. We were a typical nine year old team, playing real baseball for the first time, right out of ‘coach pitch’. We were a long way from where I thought that we needed to be.

They came into practice a whole different ball club, although they were the same group, with one new kid. They just matured. It’s crazy what one year did. The maturity level and their work ethic was night and day different. They worked their tails off.” It wasn’t just a tournament to remember for the Big Dogs, but an entire season made possible by hard work. That hard work paid off in strong showings in regular season tournaments, a 6-0 run in the State tournament that left the opposition wondering ‘Who Let the Dogs Out’, individual championship trophies over a foot tall, and a team trophy taller than a lot of the kids that did battle to win it. Hard work does indeed pay off.