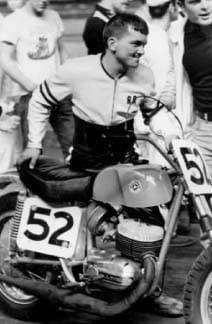 Ronnie Rall was born December 29, 1938 in Upper Sandusky, Ohio. Rall was 10 when he got his first bike… a Cushman scooter. At 17, he started racing scrambles with a stripped down Jawa 250 streetbike. Rall was 19 when he raced his Triumph Cub in Flat Track for the first time. Rall’s first Pro race was on a BSA Gold in 1960. Rall won his first National in 1963 at Heidelberg, Pennsylvania, and the following week won the Charity Newsies in Columbus, Ohio. Rall was/ is a specialist in the deep dirt on the outside of the racetrack and known for his “enter high – exit low” line on the race track which made him popular with the race fans. In 1969 Ronnie earned his largest paycheck from racing by winning that year’s season opener – the Houston Short Track. The race was held before a huge crowd in the Houston Astrodome and was televised on ABC’s Wide World of Sports. It was one of the biggest events on the pro calendar. Rall had a Bultaco race bike, but in practice the bottom end seized. His mechanic, Tom Hodges, brought a stock Bultaco Sherpa for a spare parts bike.

Instead of loading up and going home they decided to pull the ported cylinder off the race bike and put it on the stock Sherpa. Rall was shocked he made it to the final on the stock Sherpa. In the final he was not doing well until a fortunate accident happened. “I was running in the middle of the pack,” Rall said. “The track was just rougher than the devil and everyone was riding down in the holes bouncing all around. One lap I unintentionally shifted into a higher gear and the speed pushed me up to a higher line that went up around the holes. I found that it was the hot line and within three laps, I rode around everyone and just ran off and hid from them. I won $2,750 for that race, plus $500 from Bultaco, and Francisco Bulto (CEO of Bultaco) took me out for dinner”. The Bultaco factory went on to name their Flat Track model: the iconic “Bultaco Astro”. FAST-FORWARD-Ronnie will be racing a Bultaco 250 (courtesy of Roger & Donna Boyd) for the Fans at the Wauseon National Motorcycle Race.

It will be nostalgic watching him ride, all the while thinking about that historic race 48 years ago in Texas at the Astro Dome. Rall went on to win a total of 5 Nationals, butnot without injuries. His wrist was broken and dislocated during a crash in Michigan, and he hit and slid along the inner guardrail at Greenville that nearly severed his left arm off. Rall’s final National came in 1973. Rall said, “Sometimes I wonder if I should have taken my racing career more seriously, but I was having a lot of fun…. And if I wasn’t having fun, I don’t think I would have rode as well.” Rall was inducted into the Hall of Fame in 2001. Ronnie has 7 children and still races Speedway with his son Chad. He stays busy sharing his time between the 160 acre farm in Mansfield, Ohio and the 160 acre farm in Engadine, Michigan. Ronnie has over 50 motorcycles and 6 airplanes. At 80 years old, he is young at heart, and still going strong.