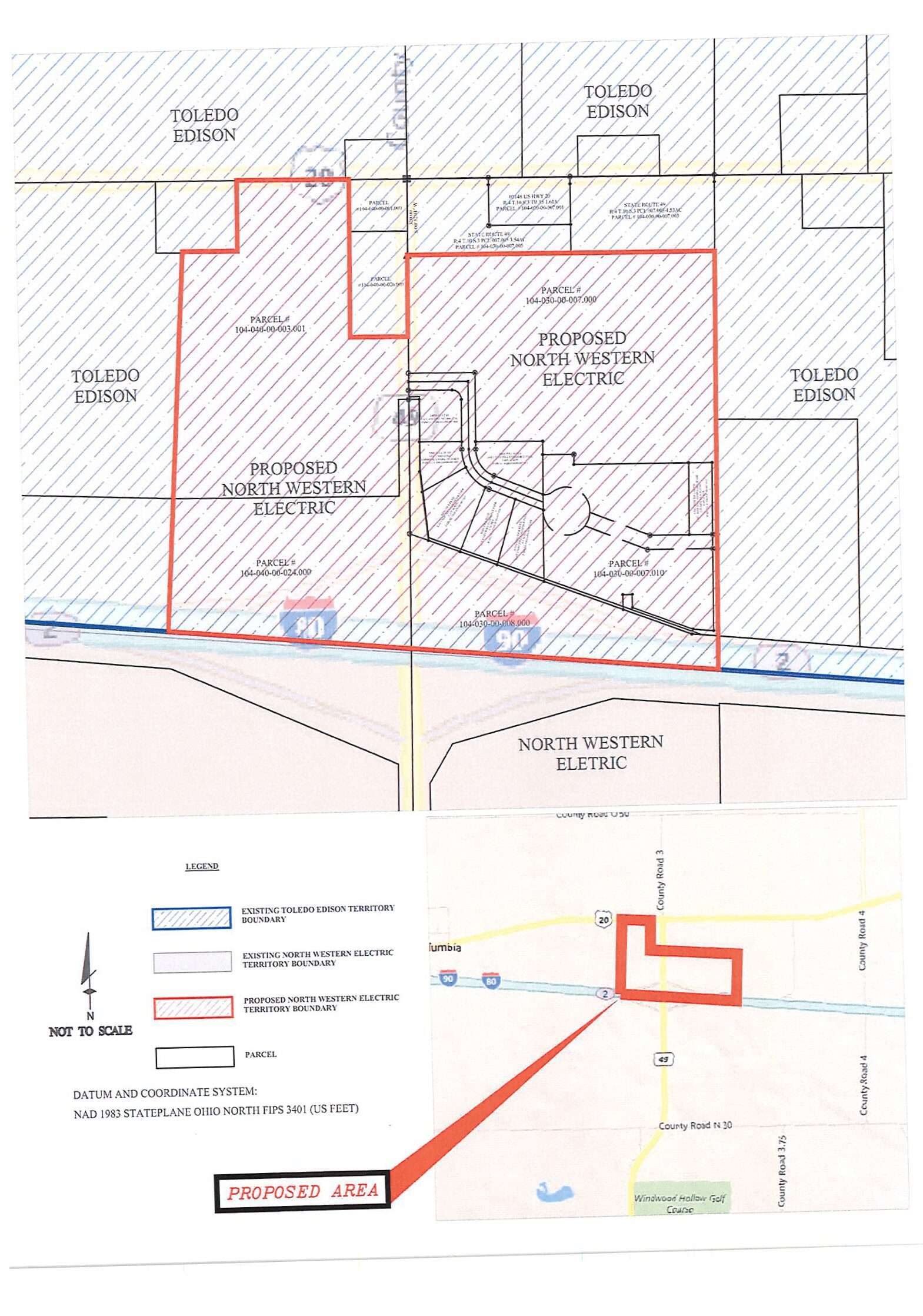 Utility territory boundaries, set in 1978 by the Ohio Certified Territories Act, dictate what company customers get their electricity from. Each electric provider has their own territory they can provide electricity within, enforced by the PUCO.

“I have been working with Toledo Edison for six years on this project to resolve long-standing discrepancies,” says NWEC President/CEO Darin Thorp. “Coming to this agreement is great news for our cooperative, members, and the future of NWEC looking forward.”

Three of the four locations gained are residential homes, while the fourth includes the Mid-Toll area north of the turnpike on State Route 49 in Edon. Located southwest of the lot is the new Love’s Travel Stop. The Mid-Toll lot includes businesses like Subway, a truck tire shop, and the township water tower and wastewater facility.

Due to heavy traffic through the area, NWEC is preparing for future economic development opportunities. New businesses would mean increased electric load for the cooperative, in turn benefitting NWEC members.

“The potential for growth here is major for our community and economy,” Thorp says. “As an electric cooperative built by the communities we serve, our interests are aligned with our members. More jobs to support local families is something we would all like to see.”

NWEC continues working together with neighboring utilities Toledo Edison and the cities of Bryan and Montpelier, all of whom the co-op shares a mutual aid agreement with. This agreement says that should there be a crisis, such as a wind or snowstorm that causes mass outages and damage, the other utilities will come to the aid of the utility in need, providing equipment and linemen to help.

What is the PUCO, what are territory lines, and how were they set?

In 1936, President Franklin Delano Roosevelt issued the Rural Electrification Act, which provided federal loans for the installation of electric distribution systems to serve rural, isolated areas of the United States.

Electricity was already commonplace in large cities, but due to high costs, no providers wanted to extend service to rural areas like farms, ranches, and country homes. Rural citizens who wanted power banded together to create not-for-profit electric cooperatives to serve their remote locations.

However, as all the types of electric providers grew (electric cooperatives, investor-owned utilities, and city municipalities), the Ohio Public Utilities Commission (PUCO) had to regulate their territories, drawing clear lines as to which company would serve certain areas. The Ohio Certified Territories Act of 1978 helped legally establish boundary lines for utilities, most of which were mutually agreed upon by all electric companies.