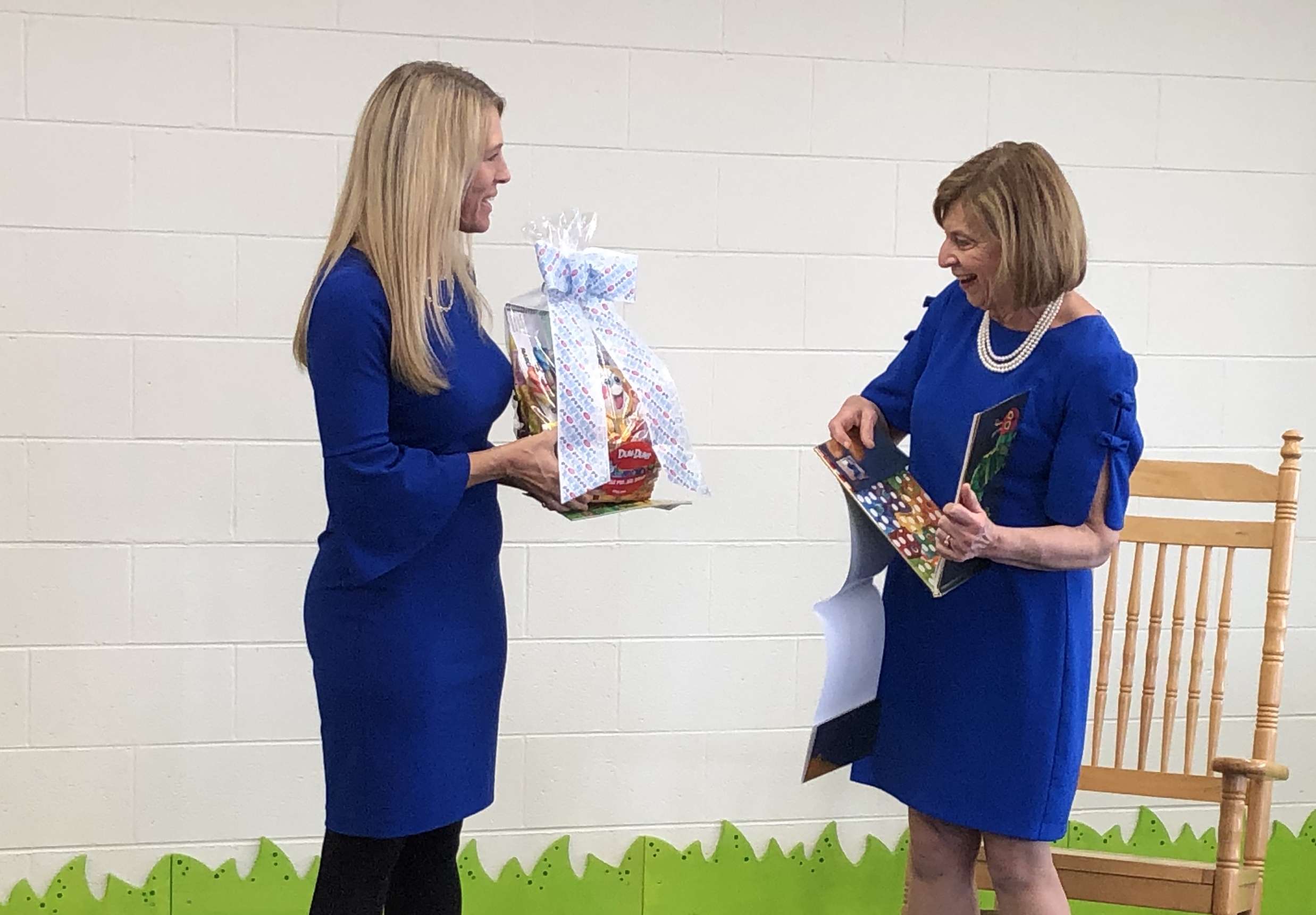 DUM DUMS FOR THE DAY … Appropriately, United Way of Williams County Director Chasity Yoder, commented as she gave Mrs. DeWine a basket from Spangler Candy, that the First Lady was right in suggesting that the lollipop in The Very Hungry Caterpillar, is a Dum Dum. (PHOTOS BY REBECCA MILLER, STAFF)

In the front of the newest edition of Fran DeWine’s Family Favorites cookbook, which was given to all adults present for the Wauseon event and everyone at the Bryan event who wanted one, Mrs. DeWine shares how she got involved with the Imagination Library.

She met Dolly Parton in Cleveland in 2016 and told her how delighted the DeWine grandchildren were when their Imagination Library books show up in the mail.

During the show that night, Dolly spoke about the program and Mrs. DeWine wrote, “It was then that I realized that if Mike ever did get to become governor, I wanted to make these books available to every child in Ohio.”

She is thrilled with the fact that all 88 counties are now involved and are making this great opportunity available to all the children.

While in Bryan she stated to the group, that Dolly wants everyone to know that the Imagination Library is not meant to be limited to children in hard situations, but is for all children.

Mrs. DeWine encourages all parents of children under the age of five to get registered immediately to start getting a free book every month.

Parents can register online at OhioImaginationLibrary.org or stop by the local library to get a form put there by the United Way chapters. These books come at no cost to you and will bring great joy to your children.

Mrs. DeWine was welcomed around 11 a.m. in Wauseon at the Primary School Library, by United Way of Fulton County Director, Gina Rossman.

Mrs. Nichole Aeschliman’s class of twenty extremely well-behaved Kindergartners gave the First Lady their complete attention as she read her book to them.

As the mother of eight and grandmother of twenty-six, Mrs. DeWine drew the children in as she leaned toward them, looked them in the eyes and enjoyed the story right along with them.

Having read the book many times through the years to her own family, she was able to read it upside down, thus giving the children the joy of seeing every picture right at their level, on the floor in front of her. 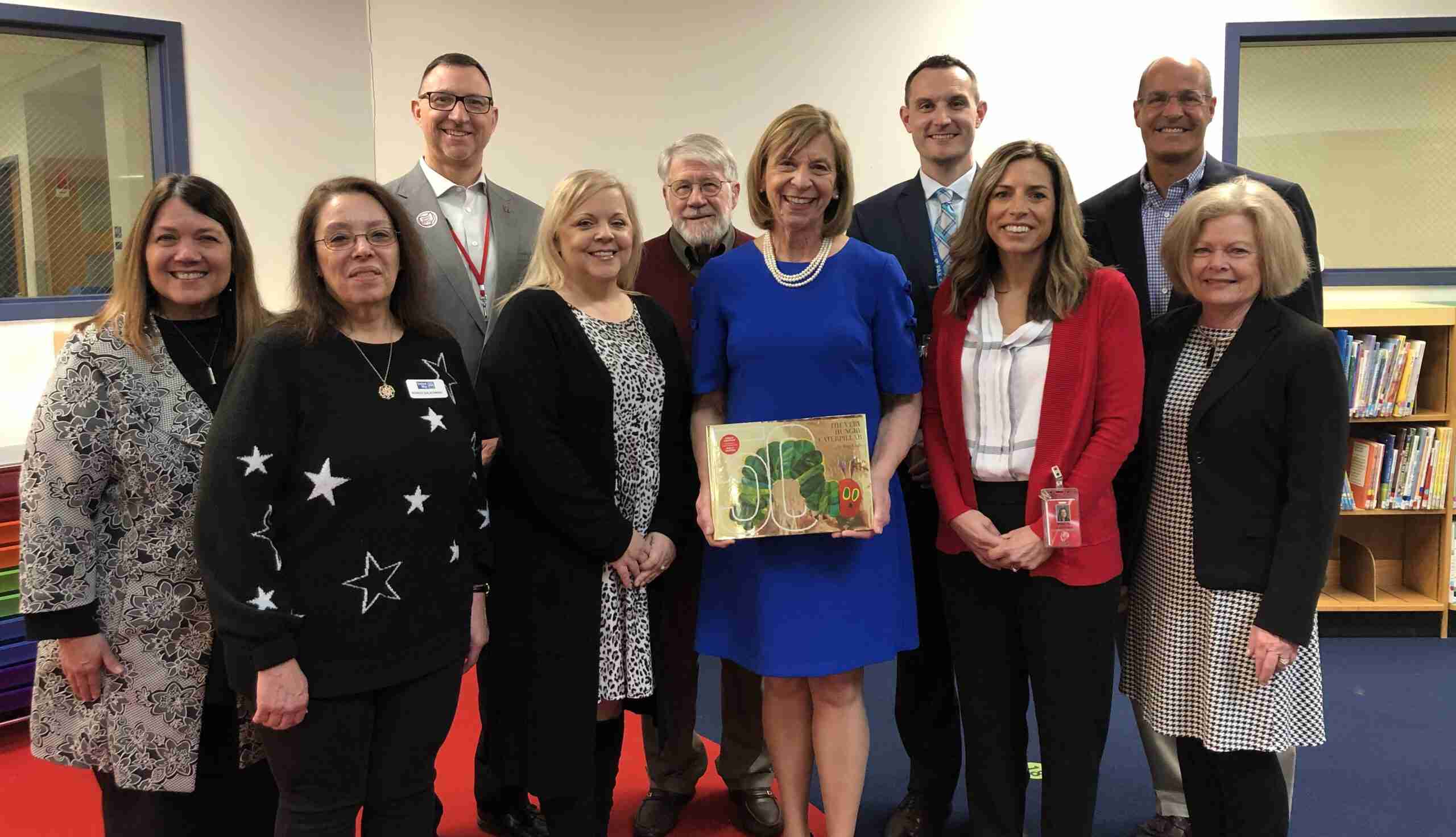 When she finished reading the book, she engaged the children in some Q&A time, with the questions mostly asked by her.

They loved answering, raising their hands to be the one she called on, and telling her their favorite things to read about.

At one point she explained what her husband, the Governor, does and asked if anyone wants to be the Governor. Two little boys raised their hands, so who knows, we may have a future Governor of Ohio from Fulton County!

After the children were each given their own copy of The Very Hungry Caterpillar, and had gone back to their classroom with Mrs. Aeschliman and teacher’s aide, Dawn Ankney, Mrs. DeWine and her staff visited with a few local dignitaries who had come for the event.

Gina introduced her to Wauseon Mayor Kathy Huner, a couple there from the United Way Board as well as some school officials and supporters of United Way and Imagination Library.

She graciously visited with each one and handed out copies of her most recent addition to Fran DeWine’s Family Favorites cookbooks, before heading off to enjoy a quick lunch at Special Grounds Coffee, on their way to present in Bryan.

The Bryan event was scheduled for 1 p.m. at the Williams County Library’s main branch.

A much larger crowd greeted Mrs. DeWine and her staff, who was made up of Catherine Sulecki – Director of Communications and Marketing for the Ohio Governor’s Imagination Library, Photographer with Ohio Department of Development – Michael Blair, Special Assistant to the First Lady – Cecilia Crawford, and Eric Porter who is Director of Visual Communications with the Ohio Governor’s office, as well as some security.

This time there were three classes of preschoolers with their teachers and aides as well as a number of children of library patrons and library staff.

WCPL Director Jeff Yahraus and Libby Daniel, Youth Services Manager at the Bryan Library, could not have been happier about the timing of this delightful event.

The brand-new Children’s Section had just had its’ opening on the day before. The crisp greens and freshly designed room lent itself to a cheerful atmosphere for Mrs. DeWine’s story time.

She again read The Very Hungry Caterpillar, making these children also feel like they were the most important moment in her day. 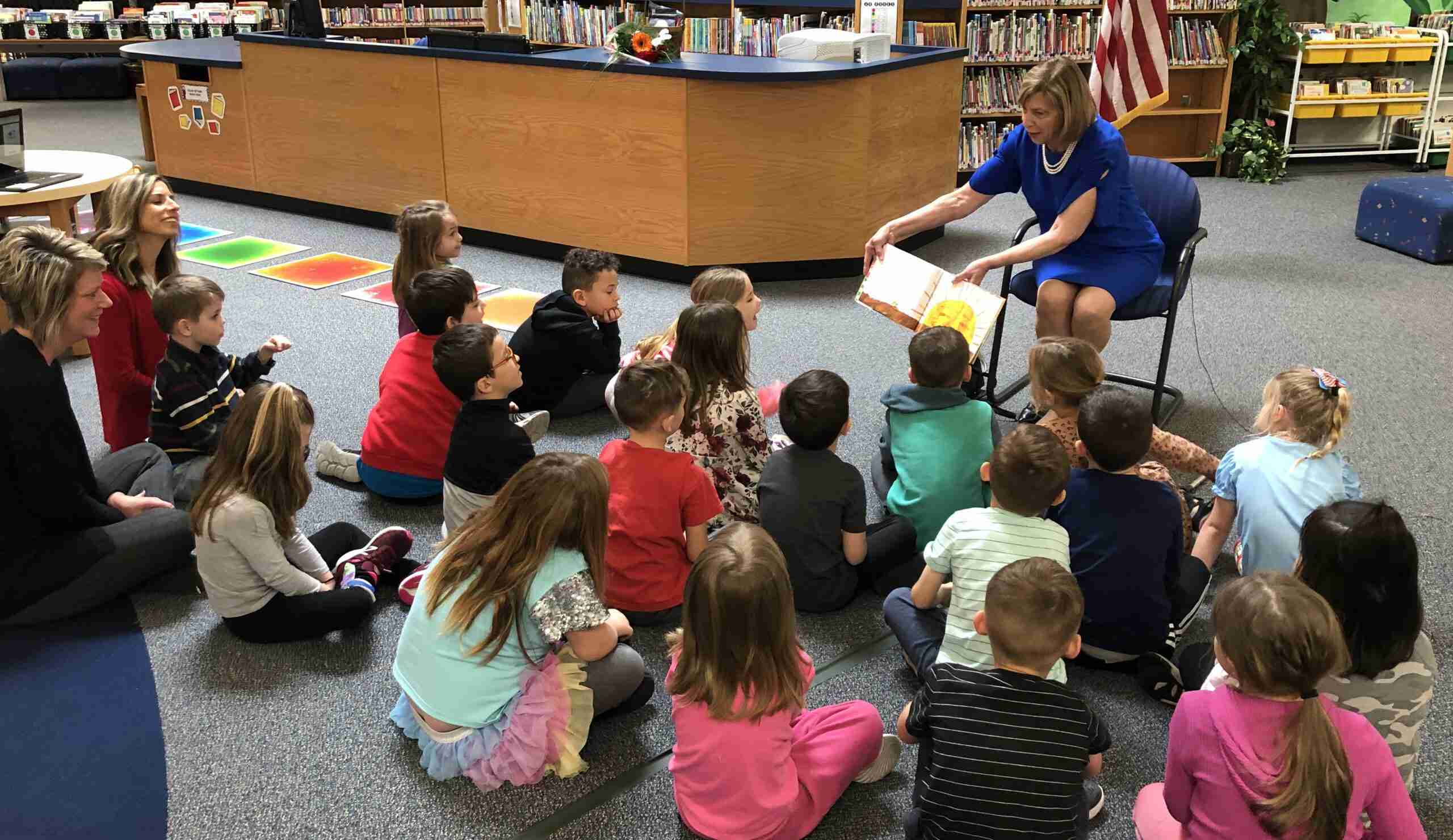 VERY HUNGRY CATERPILLAR … Ohio First Lady Fran DeWine read this well-loved book to a Kindergarten class at Wauseon Primary School (seen here with their teacher Nichole Aeschliman and Aide to one of the students, Dawn Ankney) and to a large group of pre-school children at the Bryan Library on Tuesday, April 5, 2022.

She drew them in, despite the fact that there was quite a large group, and handled all their wiggles and joy with grace and love.

While reading the pages that have a picture list of the many things the caterpillar ate, she reached the lollipop and paused to ask, “Do you think that lollipop is a DumDum?”

That drew laughter from the large crowd of adults gathered behind the seated children. Later, when United Way of Williams County Director Chasity Yoder gave her a basket of goodies from Bryan company, Spangler Candy, Yoder answered the question, “Yes, that lollipop in the book is a DumDum!”

Yoder told the children that their teachers would have a book which was donated by United Way of WC and Walmart, as well as a lollipop from Spanglers for each of them.

Each child also was given an individually wrapped sugar cookie freshly baked by Montpelier company, “Cookies on Demand”, from the library staff. Mrs. DeWine helped the teachers and library staff hand out the cookies.

With such a large crowd, it was hard to wrap up the event and get on their way to other afternoon meetings, but eventually all the pictures were taken, the cookbooks were handed out and Fran DeWine thanked everyone for the wonderful welcome.

Before heading out the door, she stopped at the Check-Out desk to speak with the librarians and encourage them to sign up all the children they can. She was thrilled to hear that a child had signed up at the desk, that very day.

This month, April 2022, the Ohio Governor’s Imagination Library has 316,435 children, over the 88 counties, enrolled in the program.

They mail one age-appropriate book each month to children, until their 5th birthday. All kids in Ohio are eligible to be enrolled in the program at no cost to their family.

That means that 993 books were mailed to Fulton County children this month, and 1, 174 to children in Williams County. Mrs. DeWine is hoping that any families not already enrolled will do so. 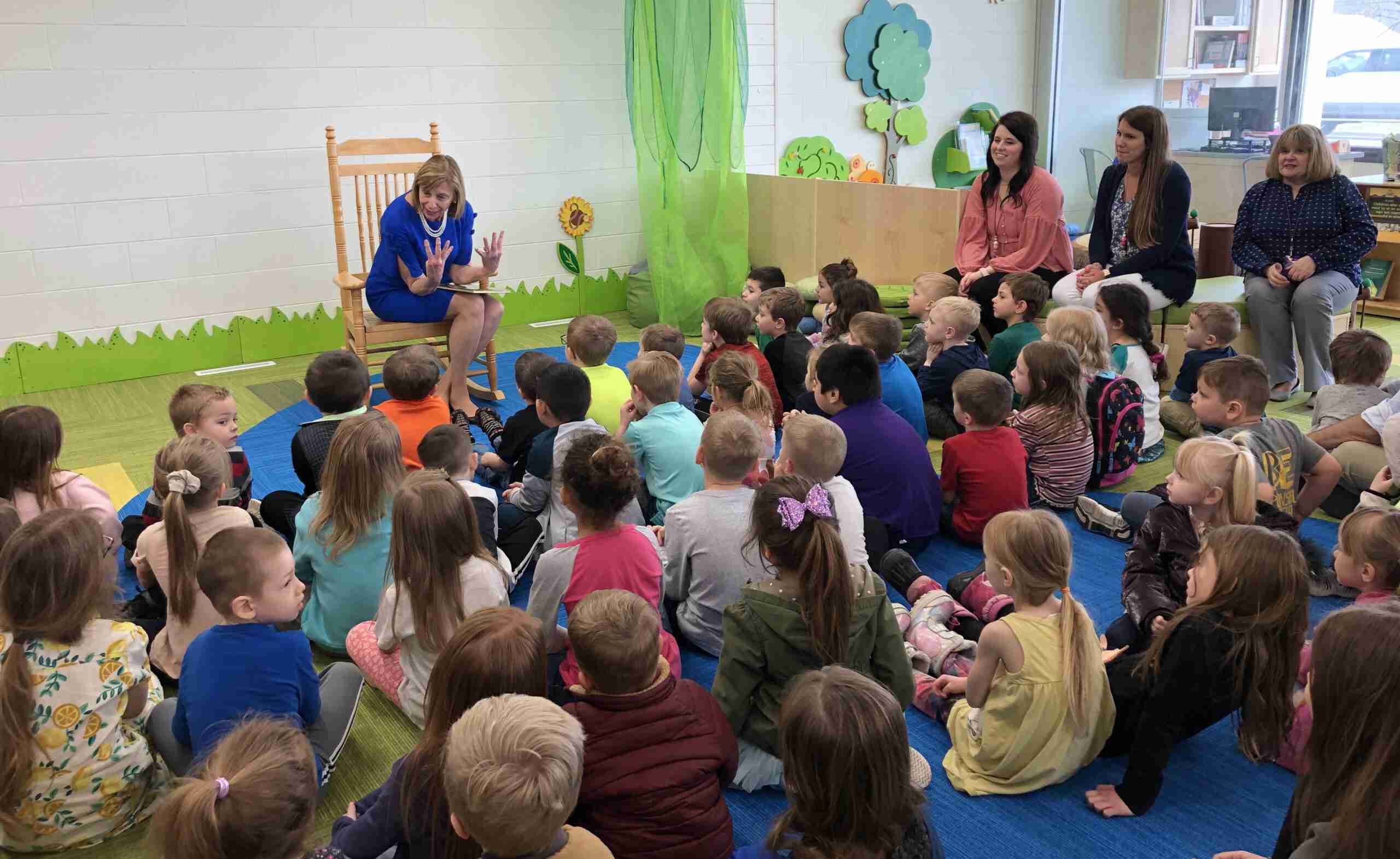 EIGHT CHILDREN … With each group, Mrs. DeWine asked the children how many children they might think she has. This Bryan bunch had some great answers with “66”, “2” and “100” being some that brought chuckles to the adults. She is seen here holding up eight fingers so they could count how many she has, as well as 26 grandchildren.