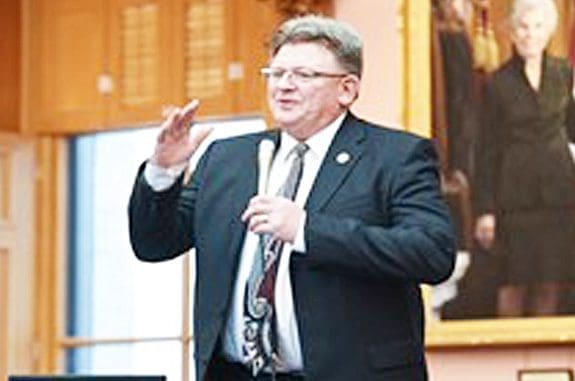 Jim Hoops is currently serving in the Ohio House of Representatives. He previously served four terms representing the same seat from 1999 to 2006.

By 2006, Hoops was term limited and unable to seek another term in the House. In 2018, Hoops returned to the Ohio House of Representatives and now represents the 81st House District, which consists all of Fulton, Henry, Williams counties, and the northern portion of Defiance County.

From 1985-1998, he served as Henry County Auditor; and from 2014-2017 as the Associate Vice President for Strategic Initiatives at Northwest State Community College.

Jim was a 1977 graduate of Patrick Henry High School and went on to earn a Bachelor of Science degree in Business and Computer Programming at Northwest State University of Louisiana.

He was employed by American Municipal Power, Inc. from 2007 to 2014 where he served as Associate VP of Finance and was part of a team that financed over $6 billion to construct power plants that included hydro, coal and natural gas. He and his wife, Deb, reside in Napoleon.

Rep. Jim Hoops will be speaking at the Fayette CDC meeting at Fayette High School on Monday, February 20, 7:00 p.m.

Topics will include an update on what is happening in Columbus and why Ohio is the place to be.