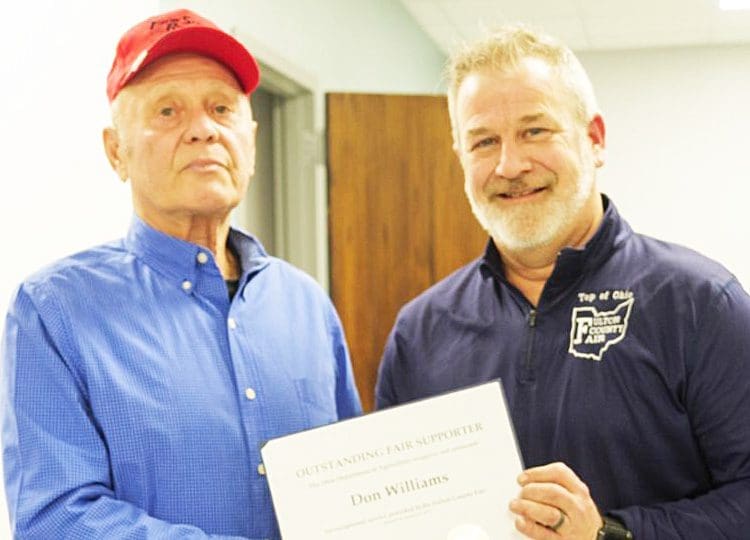 During the 2023 OFMA convention, they announced that Don Williams was chosen as the Outstanding Fair Supporter Award recipient for the Fulton County Fair.

The choice to nominate Don Williams was an obvious one for the Fulton County Fair Board.

Don has lived across from the Fulton County Fairgrounds for nearly 50 years. He has devoted much of his spare time to helping at the fair.

He served 15 years as a Fair Board Director, during which he was the director in charge of the tractor pulls, and he took pride in knowing most of the pullers and mechanics and loved to talk to all of them.

He owns several International tractors and shines them up for the National Threshers Association, which is held annually at the fairgrounds.

Don was also involved in installing drainage on the infield and for Spangler Arena. In fact, when the idea of building a new show barn was brought up, Don was a large part of the design, planning, and drainage work and even helped to obtain donations to proceed with the build.

After many months of planning, Spangler Arena was built, an excellent addition to the Fulton County Fairgrounds.

One fair board member pointed out, “Don is there to answer any questions on the property’s history. He has donated countless hours and knowledge to improve the fair at no cost.”

Another board member said it is not uncommon to see Don cross the road after mowing his lawn to mow the ditches along the Fairgrounds property.

“He has a love and pride for the fair and wants it to continue to be a high point in Fulton County for future generations to enjoy,” said Fair Board President Ron Rice.