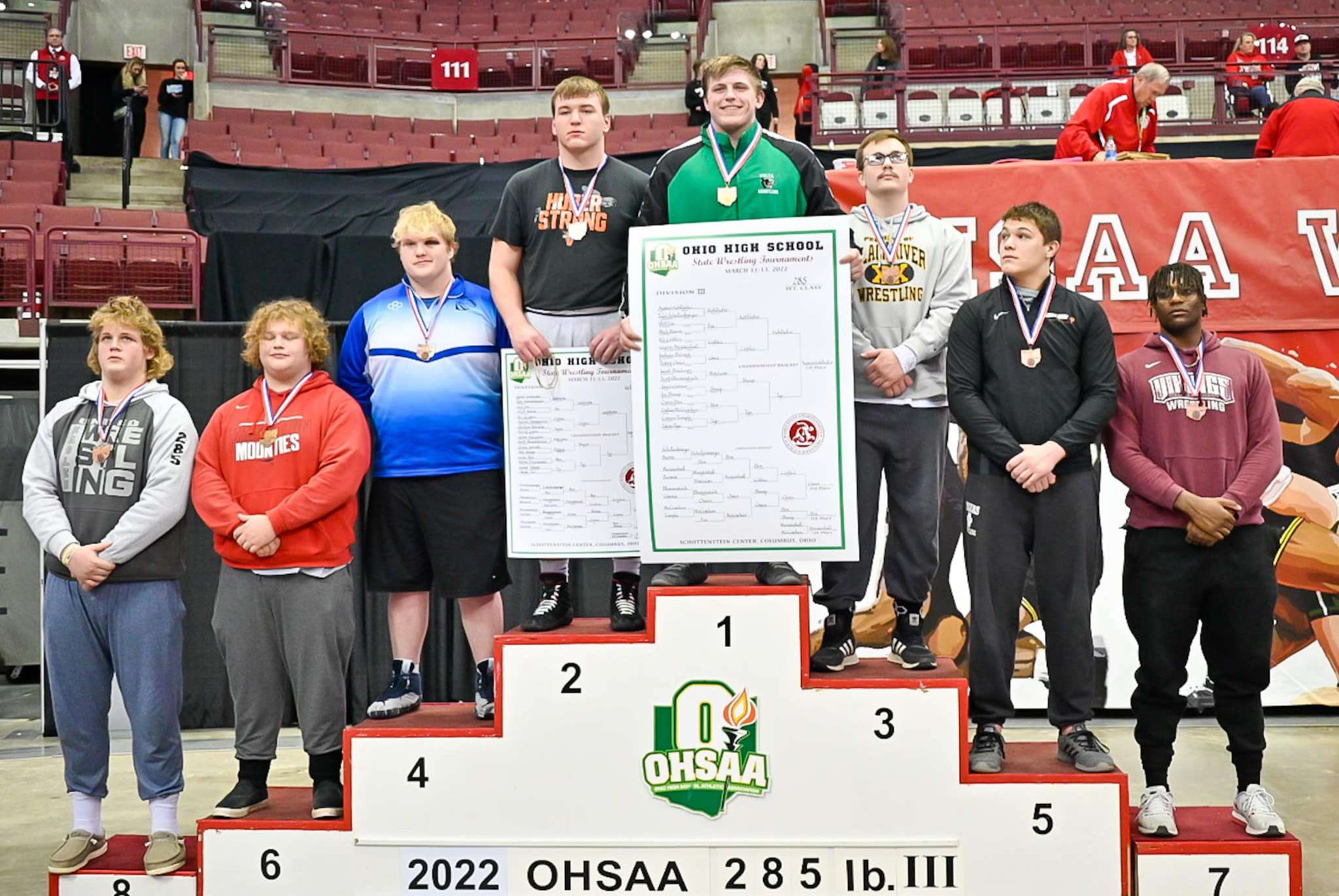 TWO-TIME STATE CHAMP … Delta senior Austin Kohlhofer stands atop the podium after winning the Division III state title at 285lbs. It was the second consecutive state title for Kohlhofer, who was the 220 -pound state champion last year. (PHOTOS PROVIDED)

COLUMBUS – The Panthers took four wrestlers to the Division III State Championships and returned with a state championship and a runner-up finish.

Austin Kohlhofer followed up his state title last year at 220 by capping off a 43-1 senior season by taking the championship in the heavyweight division this year.

Before Kohlhofer finished the day for Delta, freshman Adam Mattin at 106lbs started the championship round for Delta as he faced Casper Caizzo, a 39-4 sophomore from St. Paul.

Caizzo, who defeated Mattin 6-3 in the district semifinals, took control early by scoring a takedown and a near fall to take a 5-0 lead after the first period.

Caizzo would add an escape and another takedown in the second period on his way to an 8-1 win as Mattin’s season ends as Division III runner-up at 40-11.

It was Kohlhofer’s turn in the final match of the night as he squared off with Taran Tyo (48-2) from Versailles.

With the score 0-0, Kohlhofer struck first with an escape to take a 1-0 lead in the opening seconds of the second period.

Kohlhofer gained control with a takedown in the opening thirty seconds of the final period and after an escape by Tyo it was 3-1. Kohlhofer registered another takedown for a 5-1 cushion which would be the final margin.

All four Panther wrestlers who made the trip to The Schott earned their way onto the podium with Evan Perry taking eighth at 157lbs and Carson Chiesa took third place in the 126-pound weight class. Delta finished fourth in the team standings with 66 points.

Archbold sophomore Brodie Dominique (48-3) was the third NWOAL wrestler to go for a state crown as he took on senior Pierce Taylor (31-1) from McNicholas. 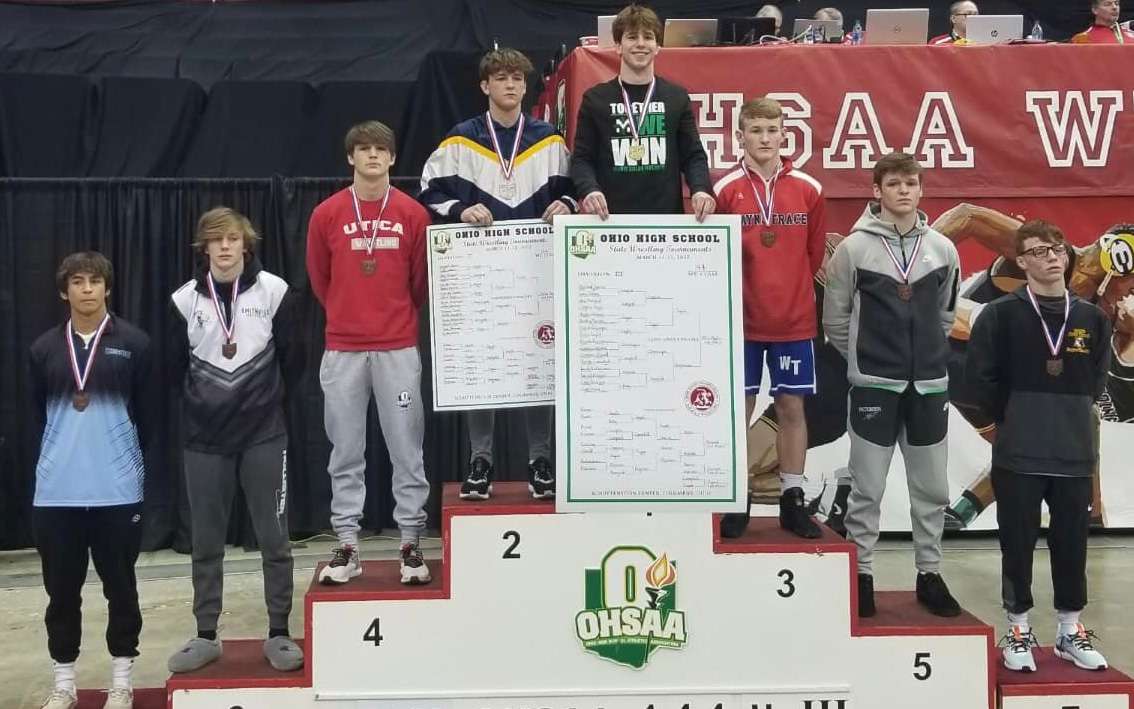 SILVER MEDAL AT 144 … Brodie Dominique (48-4) from Archbold took home second at 144lbs after dropping a heartbreaker 3-2 in the championship match against Pierce Taylor from McNicholas.

After a scoreless first period Taylor would execute an escape early in the second period for the first points of the match and that remained the score heading to the final period.

Dominique would deadlock things at 1-1 with an escape early in the period as the match appeared to be headed to overtime.

But it was Taylor scoring a takedown in the final fifteen seconds to grab a 3-1 advantage and he hung on for a 3-2 victory as Dominique scored an escape shortly after.

Dominique’s sophomore campaign ends with a 48-4 record and a runner-up finish in Columbus.

Hayden Dickman also represented the Bluestreaks in Columbus by qualifying in the 190-pound division.

Dickman (40-7), who went 1-2 on the weekend, fell in the quarterfinals 6-4 to Owen Pummel from Indian Lake before bouncing back for a win by fall in his first-round consolation match.

The Archbold junior was eliminated in the consolation quarterfinals by Owen Johnson from Liberty Center in a 3-2 decision.

Edgerton senior Hayden Herman made his first ever appearance at state and lost two tight matches on Friday.

Herman opened with an 11-9 loss to Brock Durbin from Mapleton before ending his Bulldog career by falling 10-9 to Ramakrishna Gandhi of Reading in the consolation first round to finish the season 40-8.

In Division II, the Wauseon Indians originally brought in eight wrestlers, but junior alternate Manny Gante (150) was placed on the brackets due to the default of another opponent giving Wauseon nine wrestlers competing.

It was a tough weekend for Wauseon with the Indians going 3-6 in the first round as Collin Twigg (113), Larry Moreno (126), and Zaidan Kessler (175) earned opening round wins.

Lawson Grime (138), Benicio Torres (144), and Connor Twigg (157) were able to get wins in their first consolation matches to advance to day two after falling in their first-round bout while Zaden Torres (132), Manny Gante and Connor Nagel (165) saw their seasons come to an end on day one.

When the dust settled on Sunday morning, Grime was the lone Indian to find a spot on the podium as he took fifth at 138 pounds. 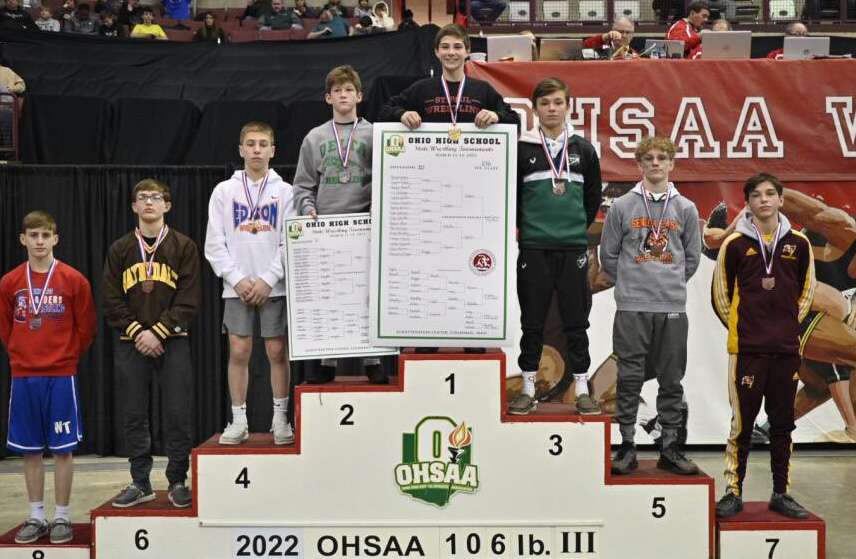 SILVER MEDAL AT 106 … Delta freshman Adam Mattin (40-11) earned a spot on the podium by placing second at 106lbs after falling to Casper Caizzo from St. Paul in the title match.