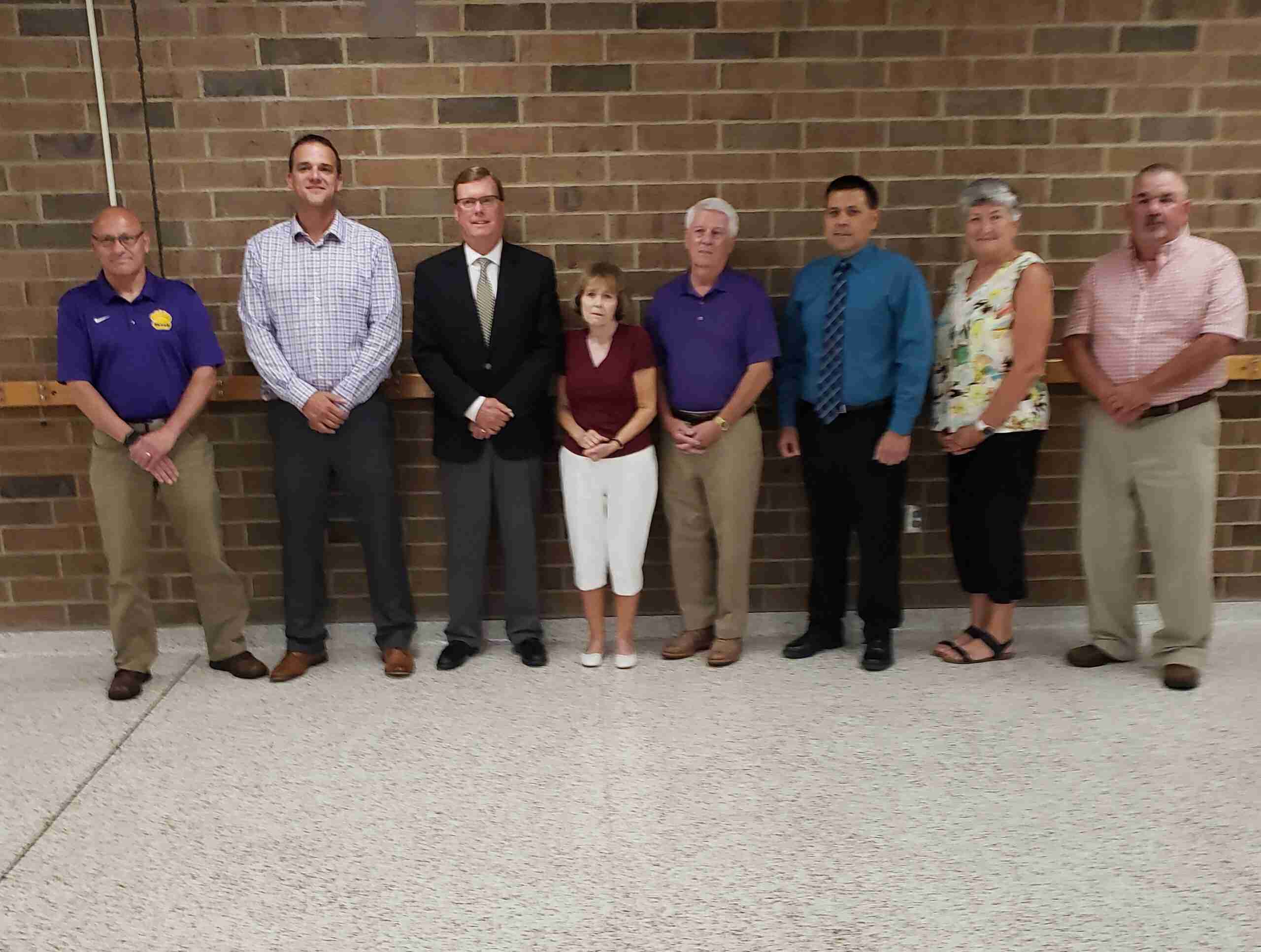 HONORING THE VOICE OF BRYAN FOOTBALL … Left to right, are: Bryan Athletic Director Chad Savage school board members Dustin Schlacter and Scott Benedict, guests Candy Shumaker and Tom Shumaker, board members Ben Camarillo, Deb Opdycke and Mike Stockman. On behalf of the late Don Shumaker, his brother Tom was on hand as the board members unanimously approved the Bryan press box in honor of Don. (PHOTO BY DAN COOLEY, STAFF)

The August 9 Bryan School Board meeting began with a call to order, followed by the pledge of allegiance.

A roll call then took place, with all five school board members, Scott Benedict, Ben Camarillo, Debra Opdycke, Dustin Schlachter and Michael Stockman, all in attendance.

The meeting began with naming the dates of beginning of school for Four County. Juniors will start on August 18 and seniors, August 19.

Elementary principal Kasey Thormeier announced that they are getting ready for open house, which will take place on August 16. She also introduced new staff member Delaney Miley, who will be responsible for the pull out group, for grades 3-.5.

School begins for most students on August 18. Students in preschool, cub and kindergarten will start on August 20.

Karyn Cox is the new director of teaching and learning. She said she is busy ordering new books and contacting teachers.

Bryan schools treasurer Kevin Schafer gave a report on the treasury, with an increase of 10% over last year and an adjusted budget of 1.1 billion dollars.

A motion was made and the figures were approved unanimously by the board.

Schafer reported that several donations had been made: $1500 for girls basketball uniforms by Elizabeth and Matthew Grothaus; $500 for a violin for the orchestra by Jean Druesdow; $1176 to boys soccer and $2800 to swimming and diving by the athletic boosters and $400 for band by Bryan and Pulaski.

In old business, Bryan superintendent Mark Rairigh said that there will be a substitute levy on the fall ballot. It is a renewal of the current levy, which generates 1.9 million annually. If passed, there will be no change for the taxpayers.

In new business, the school board unanimously approved the renaming of the press box to Don Shumaker press box. Shumaker served for more than 50 years as a teacher and coach and 25 years as the voice of Bryan football.

Shumaker and his wife Marlene both recently passed away, so his brother Tom and wife Candy were on hand to hear the vote. “Don loved the Bryan community,” Tom Shumaker said. “On behalf of the family, we are awfully proud and honored by this.”

In other new business, Benedict was selected as delegate for the OSBA meeting in November. Schlachter will serve as an alternate.

Next, Rairigh recommended that the YMCA transportation agreement would continue and that CHWC would have a speech therapist for students at St. Pat’s. Both were unanimously approved.

There was also approval needed for bus and van driver hours and new hires Kody King (elementary school) and Stephenie Brodock, 6-12 server in the cafeteria.

The following were recommended for new roles; Jordana Walker, Jennifer Sampson and and Christine Feesecker, all as aids in the elementary school.

Also waiting for approval were fall athletic department workers, Paige Gansmiller for parenting leave for one year and the resignation of Amanda Romes and Heather Bates. All were met with unanimous approval.

Rairigh also discussed teachers’ first day as next Monday, where they will hear a talk from the University of Minnesota head football coach P.J. Fleck.

In addition, Rairigh discussed a big topic of interest, mask wearing. The CDC is a federal organization and they have made it mandatory for mask wearing for students for all public transportation, including after school activities, so will have to follow that,” Rairigh said.

“This mandate ends on September 13, so we’ll see what happens. As far as at school, we will highly recommend mask wearing. With vaccinations, we will leave that up to the parents, though there are vaccination opportunities all over the county.” More information on this was supposed to come out later in the week.

The next school board meeting will take place September 13th, while the November meeting has been pushed back to November 15th. In addition, there is a business advisory council that meets quarterly. Their meetings this year are September 15th, November 17th, February 16th and May 18th.

The school board meeting ended with unanimous approval for compensation of an employee and he sale of property, from competitive bidding.