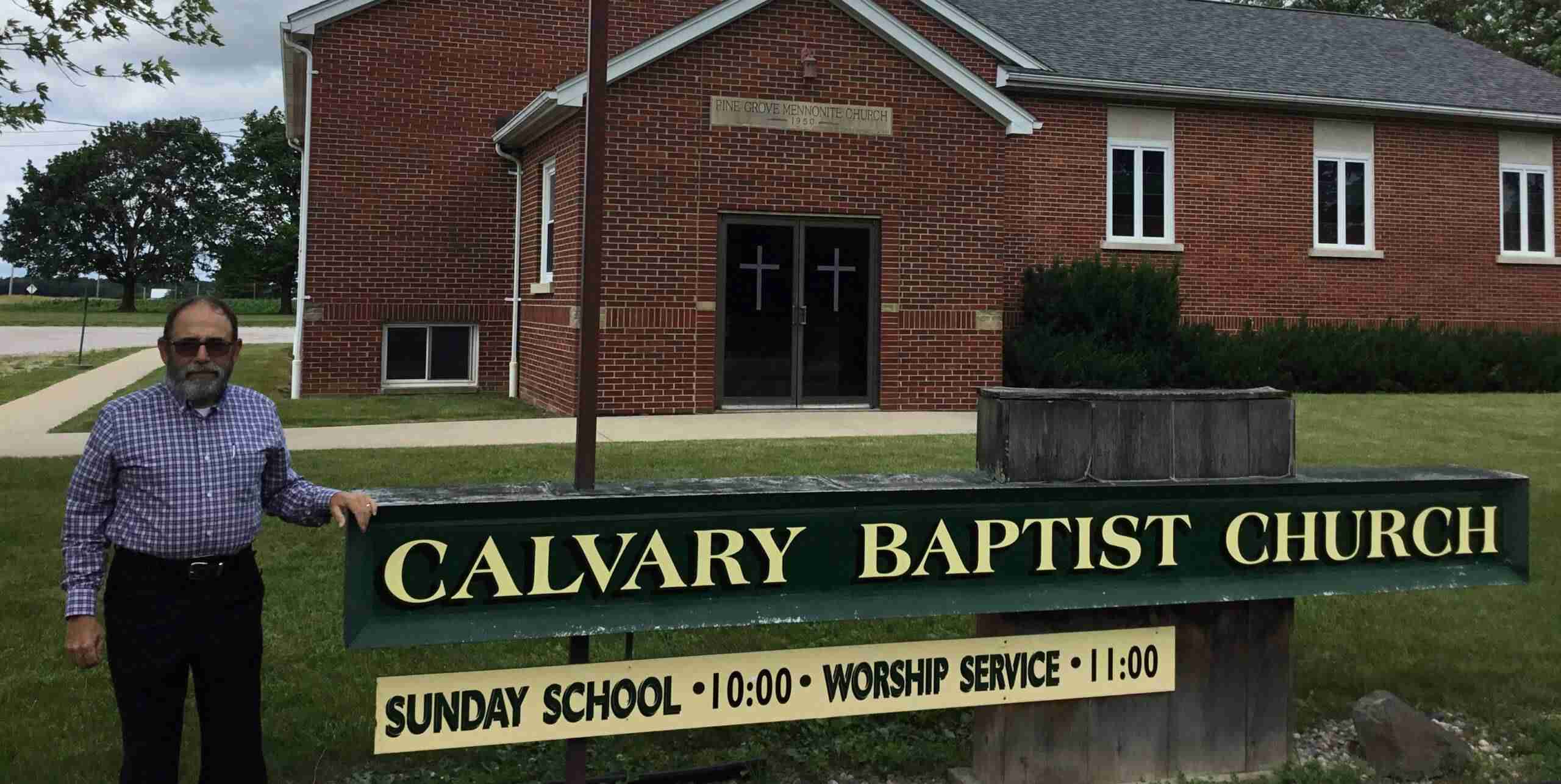 NEW CHURCH LOCATION … Calvary Baptist is not a new church to Northwest Ohio, but it is in a new location. On Easter 2021 they moved from McClure to Stryker. Pastor Mike Hartman is seen here next to the new sign in front of the building that housed the Pine Grove Mennonite Church for almost 70 years. He and the congregation are impressed with how well cared for the building and grounds have been, and are happy to be moved into their new church home. (PHOTO BY REBECCA MILLER, STAFF)

Two years ago this month, the Pine Grove Mennonite Church held their last Sunday service in their Church building located on the corner of St. Rt. 34 and WCR 20.50.

They had joyfully gathered in that building for almost seventy years, since May 1951, when they dedicated it to the Lord, but due to changes in size and commitment over the years, the group chose to close their church in June 2019 and sell the well loved and well cared for building.

Thirty-two years ago, in Napoleon, Ohio, Calvary Baptist Church began it’s ministry. Fifteen years ago, the group purchased a church building that came up for sale in McClure, and have been there until Easter Sunday 2021.

Pastor Mike Hartman, who has been the Calvary Baptist Pastor for 29 years, said that the church became aware that the Pine Grove building was for sale in February of 2020.

They had outgrown their small building and parking area in McClure and were excited about the thought of a bigger building in which to meet.

Originally there were four interested parties but due to some interesting aspects for some of them, it narrowed to two bidders and the trustees of Pine Grove chose the bid from Calvary Baptist.

The purchase went through a week after Easter, but the group was allowed to hold their first church service on Easter morning.

Pastor Hartman explained that Calvary is an Independent Baptist Church, meaning they fellowship with other churches, but they support their own missionaries and make their own decisions.

He stated that they “are a church with a focus on lifting up the Saviour and teaching the Bible.”

They are hoping to sell their smaller church building in McClure and are happy to be closer to home for all of those who attend.

Most of the members have been driving to Napoleon and then McClure all these years, from the West Unity area, so they are much closer to their homes now.

Mike is married to Karla (Phillips) Hartman and they have ten children, with the youngest one being twenty one years old. All but one of their children live nearby and attend the church pastored by their father.

The Hartmans are blessed to have almost all of their 34 grandchildren under their spiritual care as well. The Hartman family may be known to some as the family who owned Hilltop Freeze for the past 20 years, before selling it in 2020.

The sign out front of the building has already been changed to Calvary Baptist Church and services are held at 10 a.m. for Sunday school and 11 a.m. for Worship Service.

Presently around sixty are attending, with all who were meeting in McClure making the switch to the new building, and one new family joining them since Easter.Hartman said everyone is welcome.