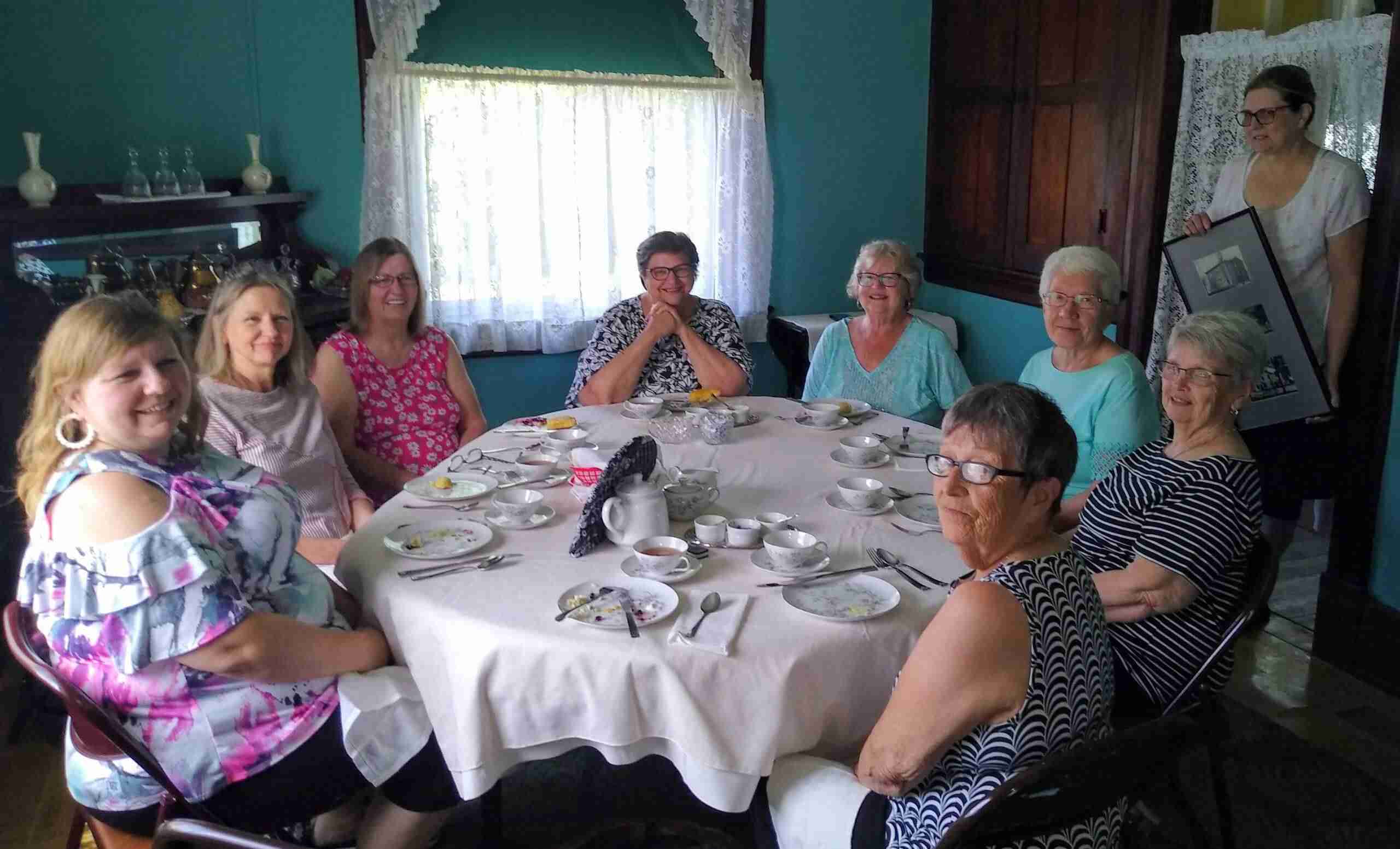 TOGETHER AGAIN … The bright and smiling faces of the first HistorTea guests in over a year signal the beginning of the return of normalcy. (PHOTO BY JENNIFER ELLISON, STAFF)

It’s been a long time coming for many dedicated historians of Fulton County. After the social disruption of the pandemic throwing off events left and right across the world, as normalcy begins to find its place among us once more, beloved events and traditions can slowly make their way back into the spotlight of the community.

And few are more welcome to the women of Fulton County than the relaxing, informative and most importantly delicious HistorTEA event at History Manor.

Chocked full of facts, history and memorable characters of yesteryear, History Manor is as welcoming as it is nearly peerless in the sheer scope of what it has to offer for those who venture through its doors.

History Manor, hence its name, is loaded with more memories and experiences than most people would suspect looking at it.

The Manor routinely unveils this history to curious visitors, sometimes in the form of reenactors portraying the lives of people who once crossed the threshold of the Manor at some point in its backstory.

But by far the best and tastiest way to absorb all of this knowledge is through the Manor’s annual HistorTea event, which took place this past Saturday June 12th.

The event kicked off sharply at 11AM and we took our seats around a beautiful and ornate wooden table covered in delicate linen and furnished with elegant ceramic dishware.

We were greeted by our host, Kalli Hintz who provided us with the first tea course consisting of orange and blueberry scones, which were delightfully complimented with samples of fresh jam, fluffy sweet cream and a wonderfully sweet/sour lemon curd, all of which paired perfectly with the delicious treats and a pot of soothingly sweet ginger peach tea.

While we ate, Kalli began the tale of the History Manor’s extensive past, beginning with its construction in 1868 to serve as the area’s first high school, a position it would proudly stand to serve until 1897, when severe foundational degradation would be discovered, leading to the building being condemned.

The high school was moved to another location while the Manor underwent major renovation and repair to salvage what was left. Originally a towering three-story structure, the entire third story of the Manor was removed to ease the weight burden. The back wing was also removed, while the eye-catching Victorian porch was added on at this time.

The new owner came into acquaintance with a couple of local doctors who were very impressed with the building and wanted to turn it into a hospital. Fulton County didn’t have a hospital at that point in time.

And so, in 1903, the Fulton County Medical Association purchased the property to use as a medical facility until 1939, when it was once again reinstated as a quaint and elegant apartment duplex.

In fact, one of the guests I spoke with, Lois Badenhot, was once a resident living in one of the apartments in the Manor. The Manor would continue on as a living space until 1968, when it was donated by Ruth Brown Campbell to the Fulton County Historical Society.

By this time, around 11:30, the second tea course was brought out from the pleasant back kitchen. This course was a savory delight of cucumber dill spread on crispy crackers, crunchy egg salad sandwiches and ham salad sandwiches served with a piping hot pot of cinnamon orange tea, the fragrant scent so reminiscent of the holidays and a sweet and spicy compliment to the tasty sandwiches.

We were then informed of the main motivation behind this annual gathering; to celebrate the lives of the women who stood firm during times of duress throughout the community of Winameg in Fulton County.

The activity was interactive and four of us were given a sheet of paper detailing the lives of a handful of these different women, told in first person and detailing the rich histories and experiences that led each of them to the myriad of choices they made, which impacted and affected the community around them.

During the reading, at around 11:40, the final course was served, consisting of a heavenly combination of cheesecake filled strawberries, a curious, yet decadent Czech-style cookie, and a bite sized Boston Cream tartlet coated in sinfully rich chocolate. This was accompanied by a strangely clear yet temptingly rich Darjeeling tea.

Kalli Hintz, who is a volunteer for the Museum of Fulton County, then allowed us to walk about the house and I was given a full tour of the rooms on the second floor, which have been accurately remodeled with artifacts found either on the property or donated from local townspeople to reflect the time periods the building passed through.

This included the ominous surgery room, within which Kalli admitted one of the Manor’s ghosts has been known to knock items off of the antique surgical table. I was also shown the equally ominous staircase leading to the attic, one of the few traces left from when the Manor was a three-story building.

Every square inch is lovingly crafted and maintained to reflect the 153-year history the Manor has endured, standing not only as a testament to the dedication of the town, but also as a permanent reminder of the feats and accomplishments of the brave and determined souls who surrounded it.

HistorTea at The Manor is a truly wonderful annual event that has clearly been sorely missed if the happy smiles of my delightful companions are anything to go by. A relaxing and enjoyable way to spend a balmy Saturday morning, and well worth the drive to get there.

Here’s hoping we see more successful HistorTea events in the coming months with more delicious tea and snacks, ever more sweet faces and bright smiles, and an ever-abundant history from which to inspire our imagination and pique our appetites for knowledge.