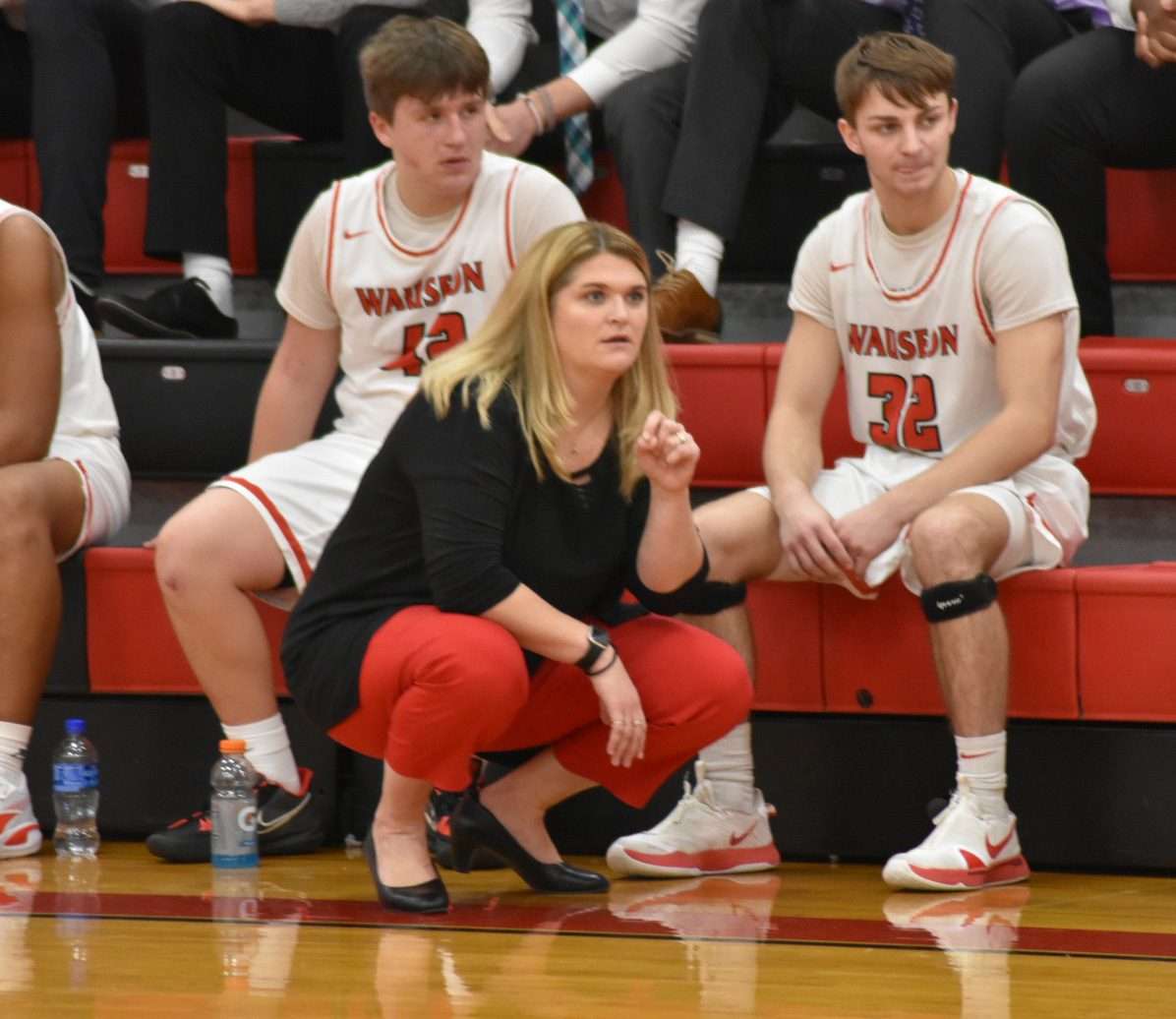 MOVING TO THE BOYS PROGRAM … New Wauseon JV boys coach Ashley Oyer watches the action in a December game versus Edgerton. After a win over Genoa on December 18th, the Indians are now 6-0. (PHOTO COURTESY BROOK CONRAD)

WAUSEON – It is very common at any level of sports to have men coaching girls’ teams. However, women coaching boys is something you don’t see a lot of in Northwest Ohio.

That is the case at Wauseon as former girls’ varsity coach Ashley Oyer has taken over as the JV boys coach after three years out of coaching following a five-year run leading the Lady Indians.

Varsity coach Chad Burt approached Oyer in August about the position, which came open over the summer when then coach Kyle Storrer accepted an administrative position at Liberty Center.

“Coaching boys wasn’t something I ever really thought about as a way to get back into coaching”, said Oyer when commenting about her new position.

“I was kind of content with my sons getting older just to coach them on weekends or whatever opportunities presented themselves.” “But an opportunity like this doesn’t come along very often.”

“We are excited about the wealth of experiences that Ashley brings to the boys’ program”, said Burt when talking about the hire.

“She has a tremendous basketball background and has experienced awesome success both as a player and as a coach.” “Besides what she brings to the table from a basketball perspective, she is a great person and will help our program continue to grow both on and off the court. We are excited about her future.”

Oyer herself has an impressive athletic pedigree being part of one of the most successful stretches in Wauseon girls’ basketball history.

Oyer, a 2000 graduate, earned 10 varsity letters in cross country, basketball, and track. She received a Division I basketball scholarship from Cleveland State University and graduated from there in 2004.

During her WHS basketball career, Oyer was a member of teams with an 86-11 record that won four NWOAL titles, four sectional titles, two district titles, two regional titles, and one state title. Oyer was inducted to the Wauseon Athletic Hall of Fame in 2019.

Following her junior season at Cleveland State, she was named 2nd Team All-Horizon League and to the league’s All-Defensive team. At the time she was the only player in school history and in NCAA Division I to record back-to-back triple-doubles that season.

After her senior season at Cleveland State, she was named to the 1st Team All -Horizon League and was the Most Outstanding Player at Cleveland State. She finished her college career with 1,150 points, 658 rebounds, 400 assists, a .739 free throw percentage, and three triple-doubles.

Oyer, who is in her 16th year of teaching, stated she wasn’t concerned about coaching boys as opposed to girls but looked more at the time commitment that was involved before accepting the position.

“It’s different being a mom and a coach, just with all the responsibilities moms tend to have. I just wanted to make sure I could be there for my boys (Grady, 10 and Logan, 7) but I did miss coaching.”

“When it comes to X’s and O’s there wasn’t a huge adjustment, my girls’ teams ran some similar things”, said Oyer about the switch to the boys’ program.

“Every team you coach as different personalities regardless if it’s boys or girls so you have to adjust to your team know matter what.” “There are some differences in coaching boys but at the end of the day basketball is basketball.”

“I’m really enjoying myself and the rest of the staff have been super welcoming and we’ll just take it year by year”, said Oyer when asked if she would want to get back into the girls program.