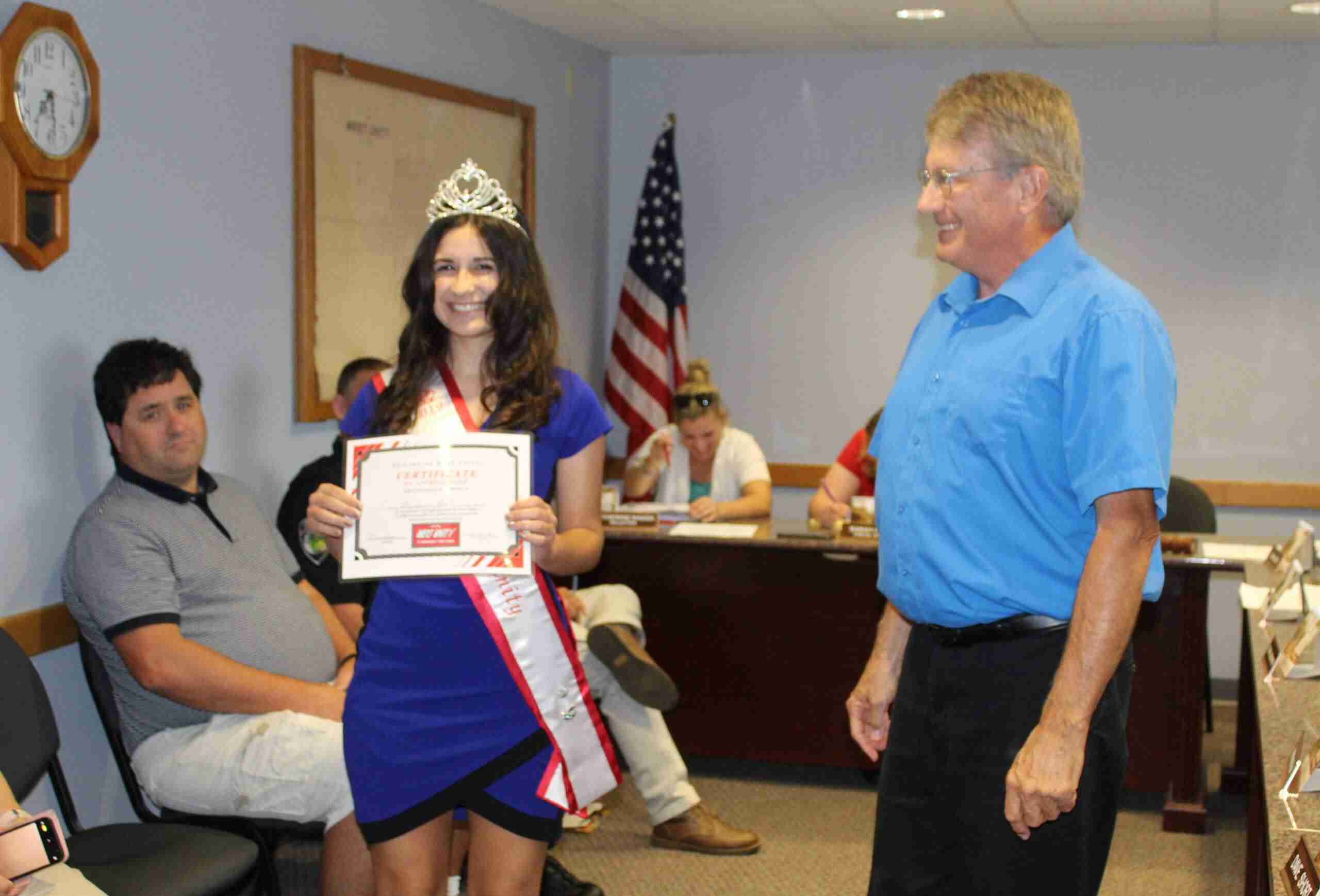 APPRECIATION FOR BRIANNA … Brianna Bell stands with Mayor Don Leu to accept her certificate of appreciation which is a new initiative started by the mayor. (PHOTOS BY JACOB KESSLER, STAFF) 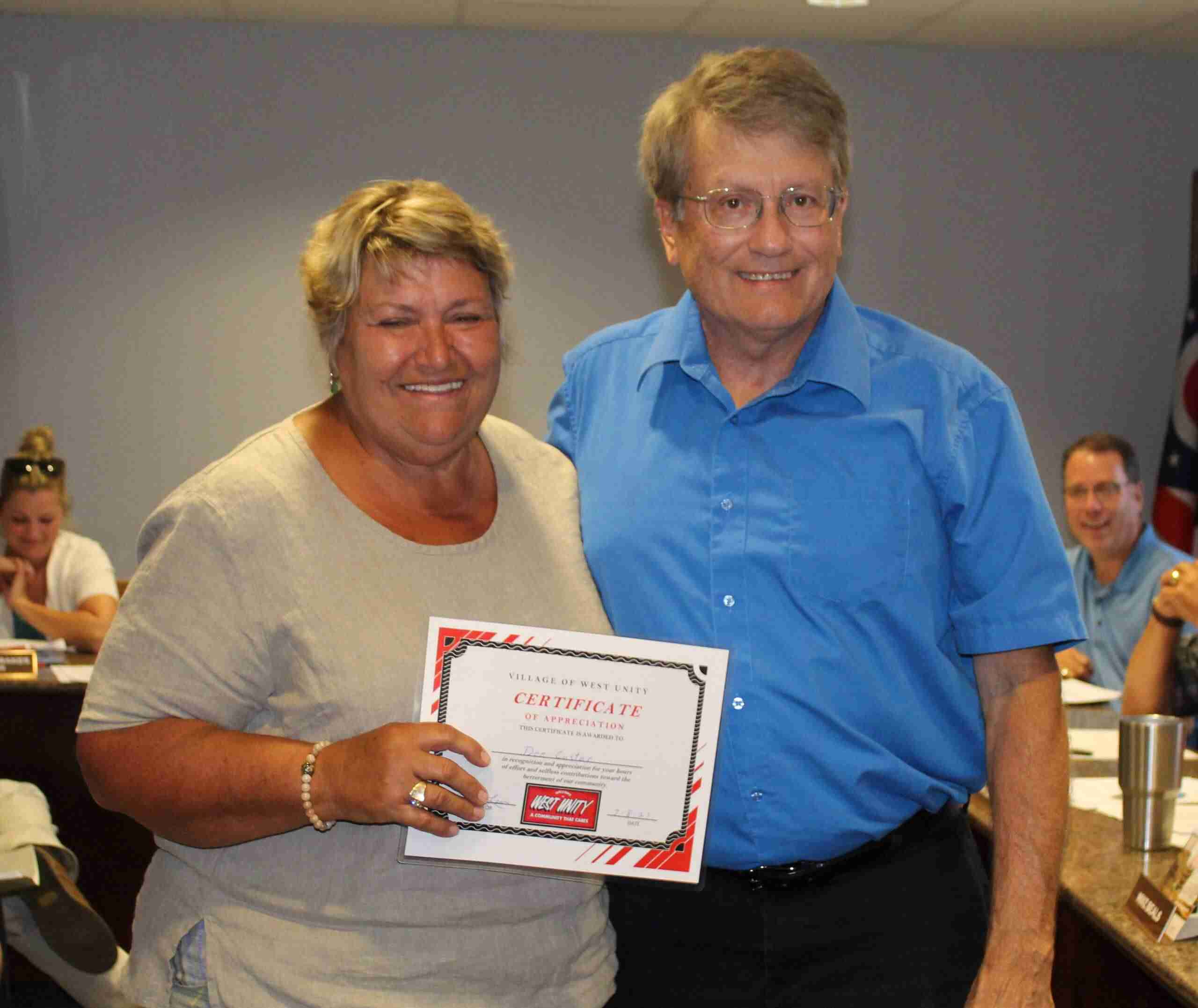 The West Unity Village Council held their meeting on Thursday July 8th. The meeting was called to order at 7:30pm followed by a prayer given by Dee Custar.

The Pledge of Allegiance was then observed by everyone present followed by approval of the minutes for the June 10th meeting.

The council then recognized visitors that were present. Mayor Don Leu created a new certificate of appreciation program that will be given out at every meeting. The first two recipients of the award were Brianna Bell and Dee Custar.

The council then moved on to Legislation. The first was Resolution 7-2021-13 and was a resolution to accept the amounts and rates as determined by the budget commission and authorizes necessary tax levies and certifies them to the County Auditor. There was a motion made to accept the resolution which passed.

Next was Ordinance 2021-3 which was to approve, adopt and enact the 2021 replacement ages to the codified ordinances, to repeal ordinances that are in conflict, to publish the enactment of new matter, and declaring an emergency. A motion to suspend the rules was made and passed followed by a motion to approve which also passed.

Corrections were made to the resolution during the discussion regarding the tax terms. A motion was made to approve and was passed.

Hydrants will be done this week through the 12th and the 16th. Village residents may experience brown or reddish colored water and are told to run the water to flush it through and it should fix the coloring.

In the Police report given the council was notified that there are two new part time officers that have started with the department and will be out training.

Moving to the Clerks report, the Village will be receiving $175,143.77 in Covid money. This amount is only around 54% of what the village was expecting due to changes being made with the dispersal of COVID funds. Funds will now be dispersed to townships which is decreasing the amount villages get.

There is also a new process that will have to be followed to get the money. An application process has to be completed as well as new guidelines for what the money can be used for.

The topic of income tax was brought up with the council learning that there are 191 delinquent residents. 96 of those people have never filed income taxes but have lived in the village for at least 5 years.

With taxes, fees and interest there is an estimated $64,000 to $200,000 dollars lost due to non-filers over the course of several years. A letter is being sent out to those that have not yet filed. If it continues, requesting the money from state and federal refunds may be looked at.

Mayors report then followed with a discussion on upcoming meetings. The next Parks meeting will be held on Monday the 12th at 7:30 pm at the old shelter house at the park.

There will be discussions on adding electricity to different spots at the park as well as where the splash pad will go that the Village received a grant for. The Street meeting will take place Tuesday the 13th at 6:30pm.

There will be discussions regarding adding storm drains on Sycamore street, sidewalks and Main Street. The next safety meeting will be on August 12th at 6:45pm.

There was also a thanks given to everyone there as well as a note about how great the community and everyone in it is. The meeting was then adjourned.