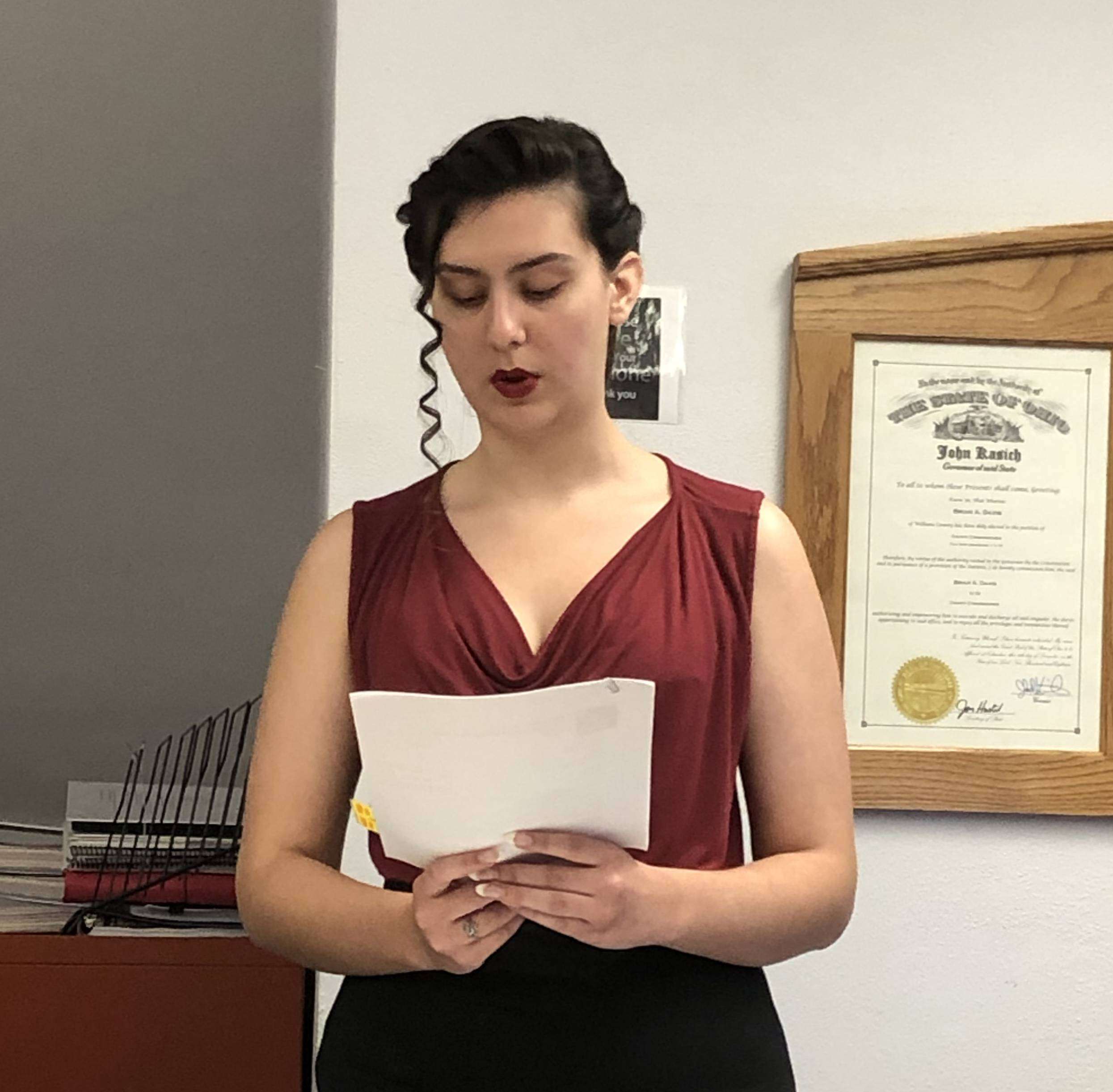 NEW CLERK … Jillian Drinnon has joined the staff at the Williams County Commissioners office and was filling in for Anne Retcher in the meeting on July 1, 2021. (PHOTO BY REBECCA MILLER, STAFF)

Judge Gallagher chaired the meeting and noted that Sheriff Kochert who is a member of the committee was not present, as also Commissioner Brian Davis was not.

The meeting topics discussed were the renovations on the third floor in the mezzanine level and the window project. This portion of their sessions lasted an hour and covered the following:

-Approval of minutes from October 9, 2020 meeting

-Re-appointment of Lee Thiel with his acceptance

-Kim Coller, Court Administrator for the WC Common Pleas Court and clerk of the Law Library Committee, had a Resolution signed by several members that set forth the renovation plan and deals with the structural hazard caused by the removal of some book shelves

-Discussion of the renovation

-A site visit to the Mezzanine level

-Motion made and approved for the Renovation to move forward with a second quote and then return for approval.

-Determined they can keep meeting “as needed.”

-Motion made and approved to “remove the $25,000 limit on these types of items and move forward with more information coming to the Courthouse Renovation Committee with anything cosmetic or structural or repair.”

Much to the dismay of a number of people, including County Recorder Patti Rockey and area resident Deb Beevers, as well as certain media persons, the Commissioners have decided to discontinue Zoom coverage of the Commissioners meetings.

During the July 1, 2021 second session which began at 9 a.m., Ms. Beevers who was on the last Zoom meeting available, stated, “I am disappointed that today is the last Zoom meeting, and you guys keep referring to this Ohio Revised Code rule which has nothing to do with public access. “

“It only has to do with you all having to meet in person. So I think the public should always have the option. If there is one thing we have learned from COVID I think it would be that.”

“So I am disappointed that is not continuing. And I have a lot more to say on that topic. I will do that later, maybe in a public forum.” (In a Facebook post on June 28, following the meeting in which Commissioner Terry Rummel put fort a motion to continue Zoom access to the meetings for the public, and neither Commissioners Lew Hilkert or Brian Davis would second the motion, causing it to fail, Ms. Beevers posted.

“These gentlemen do not support digital public access to the meetings in the future even though the media, citizens and elected officials have asked the commissioners to continue this practice.”)

Also at the July 1 meeting, area resident Emily Ebaugh who was present on Zoom, stated, “I am just curious, too, why you guys aren’t going to continue with Zoom, because it seems minimal cost to make your meeting accessible. “

“When I was on the Board we always were recorded. We were always live.” Rummel responded “Right, and that is evolving as we speak as far as the recording side of it. … the recordings are always here on the secondary system. …everything we are doing right now is recording on a second, so those, hopefully those will be potentially put out. “

“I know Patti (Rockey) and I have had a separate conversation about can we put these recordings out, so I think that is something the Commissioners are going to have to discuss.”

Rummel asked Rockey if she wanted to elaborate and Ms. Rockey said, “I actually was going to just bring to your attention, because I didn’t know that this was possible, that I talked with Andrea (Lavens) yesterday and asked her about the OnBase system and ShareBase.”

Rockey continued, “Your staff already has the licensing to be able to do that and it is just a simple upload. Andrea would create a link and they can log in at their discretion. That is something that I would really appreciate being considered, because I have found… reading the transcript, and it was a word for word transcript, it was very confusing and hard to follow, and I was sitting in the room.”

“So you don’t hear the inflection, …everybody is quiet, and then all of a sudden four people try to talk at the same time. … They are trying to put it all on there, but it looks like everybody is just talking over one another, and that’s not it. So, for me it is hearing the context of what is being said and understanding it.”

Commissioner Hilkert said that her recommendation is “something to take under consideration.” Rummel said that it is an IT thing and they would have to get with Jeremy (Suffel).

Rockey pointed out that the Prosecutor and the Sheriff’s departments both already upload in the way she suggested. There was some further discussion on how the change was made and the possibility that there needed to be a motion to discontinue Zoom.

When asked if he had any thoughts on that, Commissioner Hilkert said, “How many times do you kill a horse?” With no further discussion, the Commissioners went into recess until the 10 a.m. session.

Items approved during the meeting included:

-Minutes for previous meeting and payment of bills

Discussion was held on how pay should be handled for county employees for the Juneteenth holiday. It was determined that the commissioners are fine with paying double time and a half for holidays, and to send that to the union to see if they agree.

Concerning meetings with different departments, they decided to ask JFS to go back to the rotation of bringing in one or two department heads with him each month for their meeting. They will continue meeting with EMA quarterly, in the EMA building.

Commissioner Rummel suggested that once MARCS is up and running, the meetings with EMA/911 should be moved to quarterly. EMS will continue meeting one a month on Mondays.

Commissioner Hilkert reported that he met with Dave Page from the Fair Board and they discussed the disassembled Steer Barn.

Page is in the process of getting an estimate on reassembling that barn at a different location and will present that to the commissioners. Hilkert reminded the others that in 2020 they were “looking at committing to them $50,000 on a match with the state.”

When COVID hit they didn’t do anything because they were unsure about how the financial situation would be. He recommended that they consider providing some money when Page brings them the estimate.

Commissioner Rummel reported that he had met with Brent Wilson at the airport and Wilson has a request. Health Partners of Northwest Ohio is looking for a place to store their van inside.

It is not available for now, but eventually “there could be some potential of renting a space in the airport hanger.” Wilson also spoke of “bringing in an architect firm to start bidding and talking about that new hanger.”

Hilkert suggested checking with the Bryan Times about a heated space to park the van this winter.

The commissioners entered the last open session of the day at 10:05 with WC Treasurer Kellie Gray. Gray made recommendations on the public depositories.

Gray presented a letter to the Commissioners recommending the five banks that they are going to name as depositories – Farmers and Merchants, Huntington, Premier, State Bank and Waterford.

She also recommended that Premier Bank be named as the main depository for the main checking account. A resolution will be put forward on July 19 to make it official.

An Executive Session was held at 11:00, with Melissa Body from CEBCO and Mike Kurivial from First Insurance to discuss matters required to be kept confidential by federal law or regulations.

Present for the second Executive session were Pat Hire and Jennifer Basselman to speak about the Board of DD contract.

At 12:02 when they came out of the Executive Session, there was action taken.

A motion “to accept the negotiated agreement between WC Board of DD and the Ohio Association of Public Schools Employees ASCME Local No. 4 and AFLCIO Local No. 779. This contract will be effective July 1, 2021 and will run through June 30, 2024.