Park With The Police Held At Imagination Station In Bryan 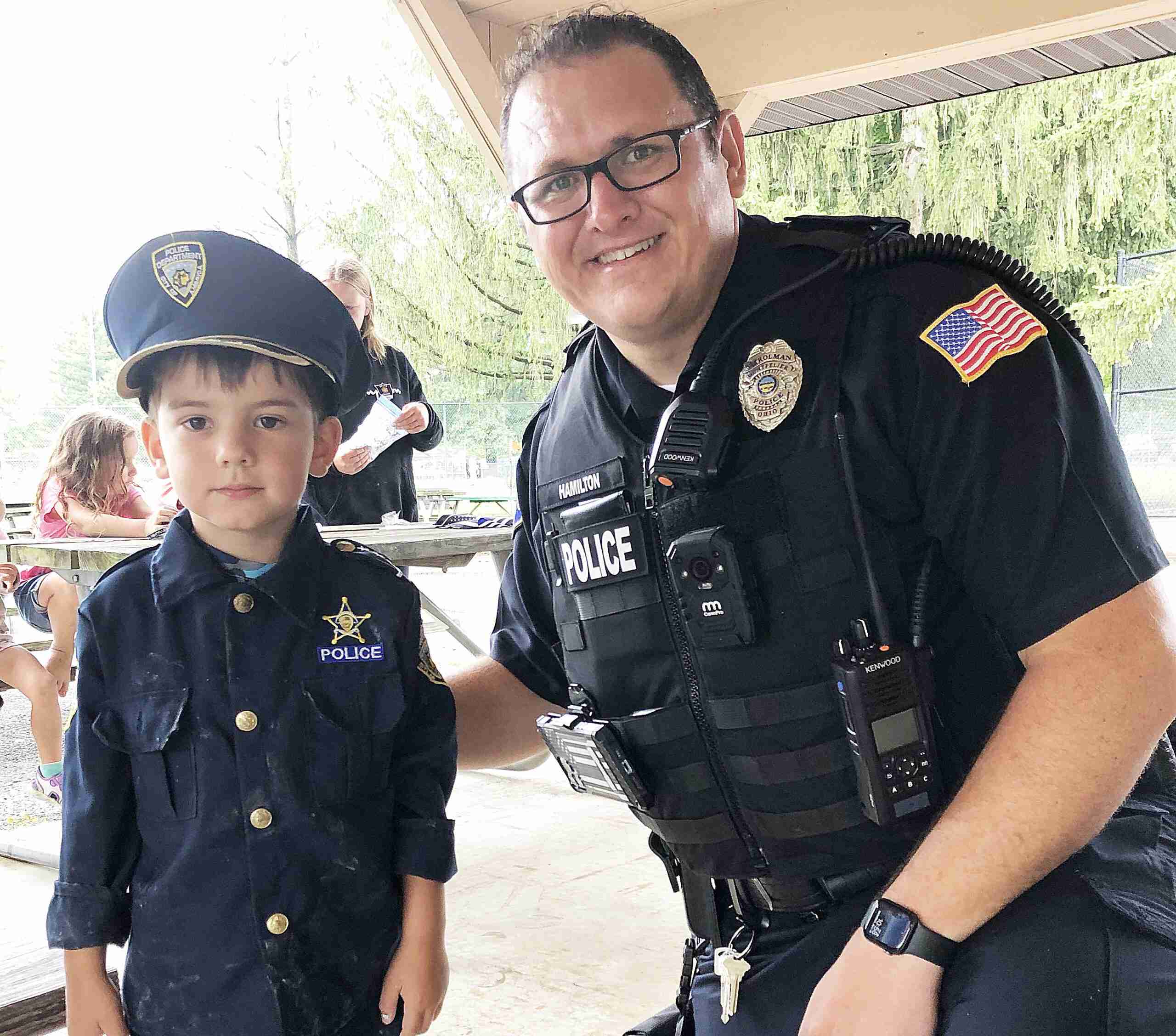 “WHEN I GROW UP” … This little guy, Abraham William Whiteman, got to meet Reserve Officer Bryan Hamilton at the “Park with the Police” family event on July 16, 2022. They both looked great in uniform! It was held in the park near the Imagination Station in Bryan, Ohio. (PHOTOS BY REBECCA MILLER, STAFF)

From around 10 a.m. to 2 p.m. on Saturday, July 16, 2022, a happy bunch of families gathered under the pavilion at the Imagination Station in Bryan, to spend some fun bonding time with Williams County law enforcement officers. Officers from a number of towns were present to participate in the planned activities.

A hay bale maze was set up in the parking lot and some tiny motorized vehicles were available for the little ones to drive around as parents sat and watched.

Other activities included playing a one-on-one game of C.O.P. (variation of HORSE) with a police officer, dunking a couple of them in a dunk tank, and making homemade playdough with cornstarch and hair conditioner.

Children were all encouraged to sign up for a raffle of a table full of great items as well as three bikes!

One of the highlights of the day was the K-9 Bite Demonstration. Sheriff’s Deputy Kyle Potts volunteered to be the criminal being attacked by the canine officer, so all dressed out in the bite training suit he went into a grassy portion of the park for the demonstration.

Handler, Bryan Officer Matt Sammons released his K-9 partner, Tyson, to chase down the “suspect.” They did it three times and every time the crowd responded with gasps at how powerful and fast he was as well as how hard he latched onto the suit worn by Officer Potts.

Adults and children alike commented on how it would be horrible to have that happen without a training suit on, and what it could do to your body. It was terrifying but thrilling to all present, and a great learning experience.

Prior to the demonstration, WCSO Deputy Jason Randall spoke to the crowd about the K-9 officers, how they are trained, where they are from, what they are trained to do, and what to expect in the demo, as well as answering questions.

Earlier in the day Randall had their newest K-9 officer, Mick, available for people to meet and pet if they so chose. He is a 55 pound puppy around 8 months old and was very happy to meet his adoring public.

Officer Randall works with his partner D’Jango, but is enjoying helping with the preparation for service of this puppy, Mick.

Another highlight during the four hours spent together was getting to see a presentation from the Education Director of Nature Nursery, Jamie Forbush.

Jamie and one of her five Education Interns, Shelby Haynes wowed the group with three live animals that are ”ambassadors” for Nature Nursery, to help the public better understand how to deal with wild animals that might be injured. 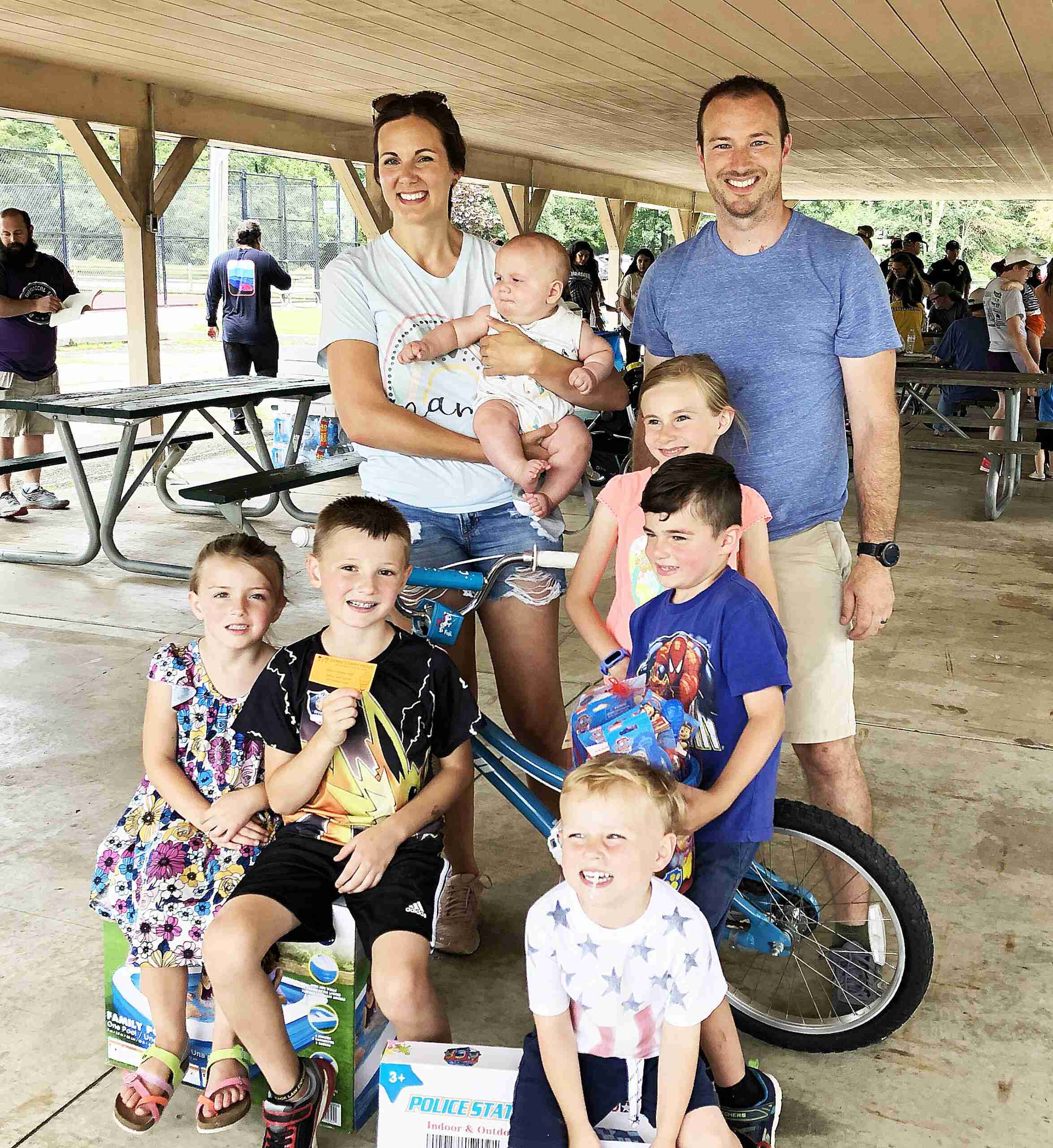 FAMILY OF WINNERS … Macie and Seth Schroeder were present for the Park with the Police event with their four children and two cousins. As the names were called for winners to come get their prizes, all six names of the children in this picture were called. As a family they won everything from a bike to an ice cream coupon. In the front is Judah, behind him to the left are cousins, Caroline and Joel. Jack is holding a Paw Patrol bucket, with his sister Genevieve behind him. Mom is holding baby Julian, who incidentally won the bike!

Jamie gave a short history of this organization that began in 1989 and shared how they have gone from helping 100 animals that year to almost 3500 last year.

She shared great information especially about tortoises and turtles, opossums and possums, and snakes. They had along Greta the opossum, Adobe a desert tortoise who should not even be in Ohio but was brought by someone thinking they were rescuing it, and Susanna the snake.

As Shelby carried the animals around for everyone to see, but NOT touch, Jamie taught many interesting facts and every person there must have heard something they didn’t know before that event. She was a fountain of knowledge.

All during the time, there was free food available, for donation if so desired, so hotdogs, chips, water and fresh donuts were enjoyed whenever anyone got hungry. All proceeds went to the Williams County Agencies K-9 Funds.

Officers Kyle Potts and Kyle Esckilsen braved the cold waters of the Dunk Tank, letting one child after another have the joy of either hitting the paddle or pushing it if they were encouraged to do so by the officer in charge. Cheers and laughter were definitely heard around the Dunk Tank.

The day ended with a raffle drawing with most of the children present in person to accept their winnings. One family in particular seemed to be quite lucky as they raked in quite a few gifts, while others waited their turn.

Bicycles, Saturn three wheel scooters, ice cream coupons, Paw Patrol toys and many other great items were given out as the names were called. Everyone there went home with something as they handed out Paw Patrol goodies at the end.

Kudos go out to all of the officers from all of the departments who came that day! It was a very kind, gentle and happy atmosphere with officers and children mingling on the basketball court, at the dunk tank and under the pavilion for the event. 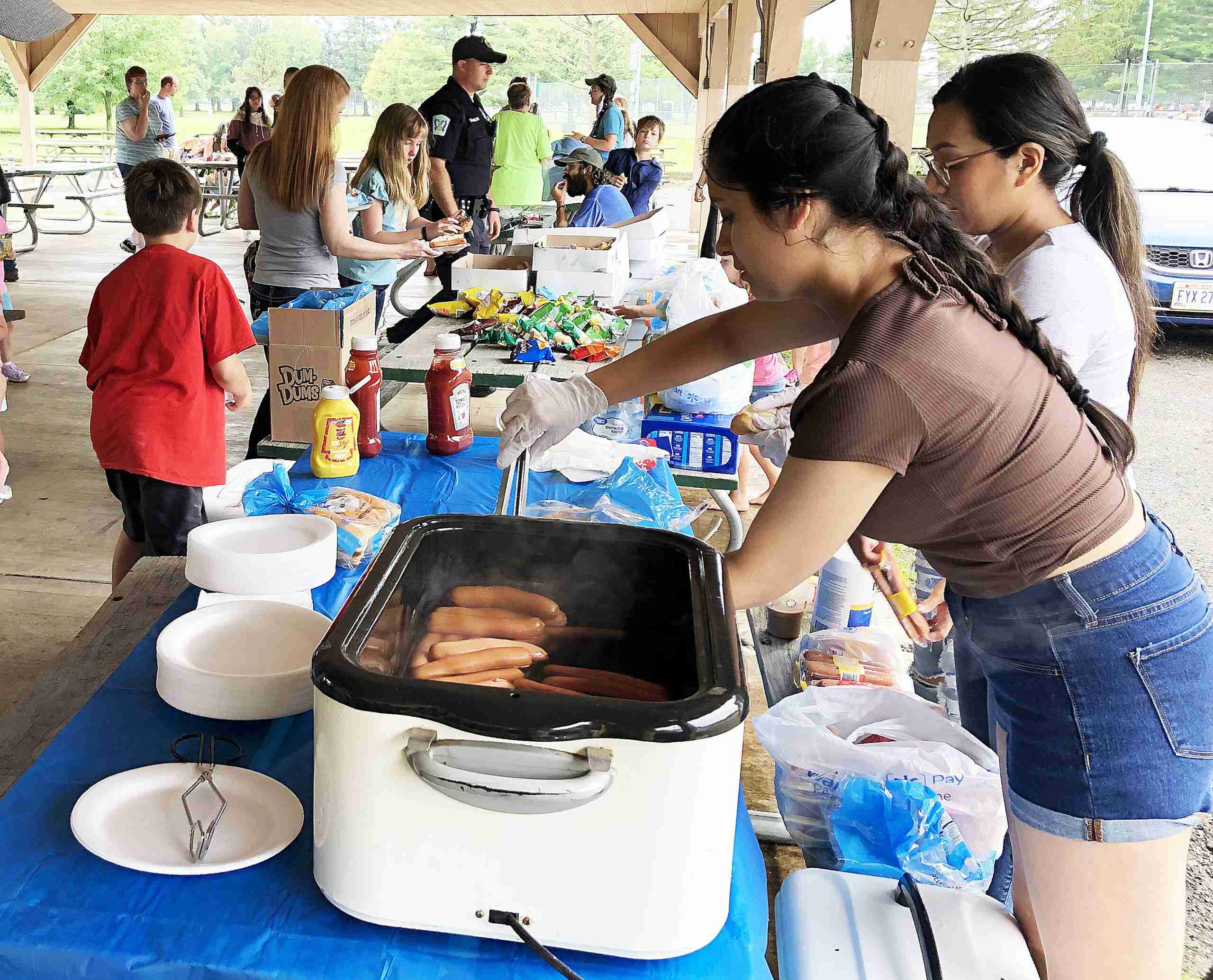 FREE FOOD … Attendees of the Park With Police event on July 16th at the Imagination Station in Bryan were treated to free food.