Presentation Given To Retired Police Chief At Edgerton Village Council 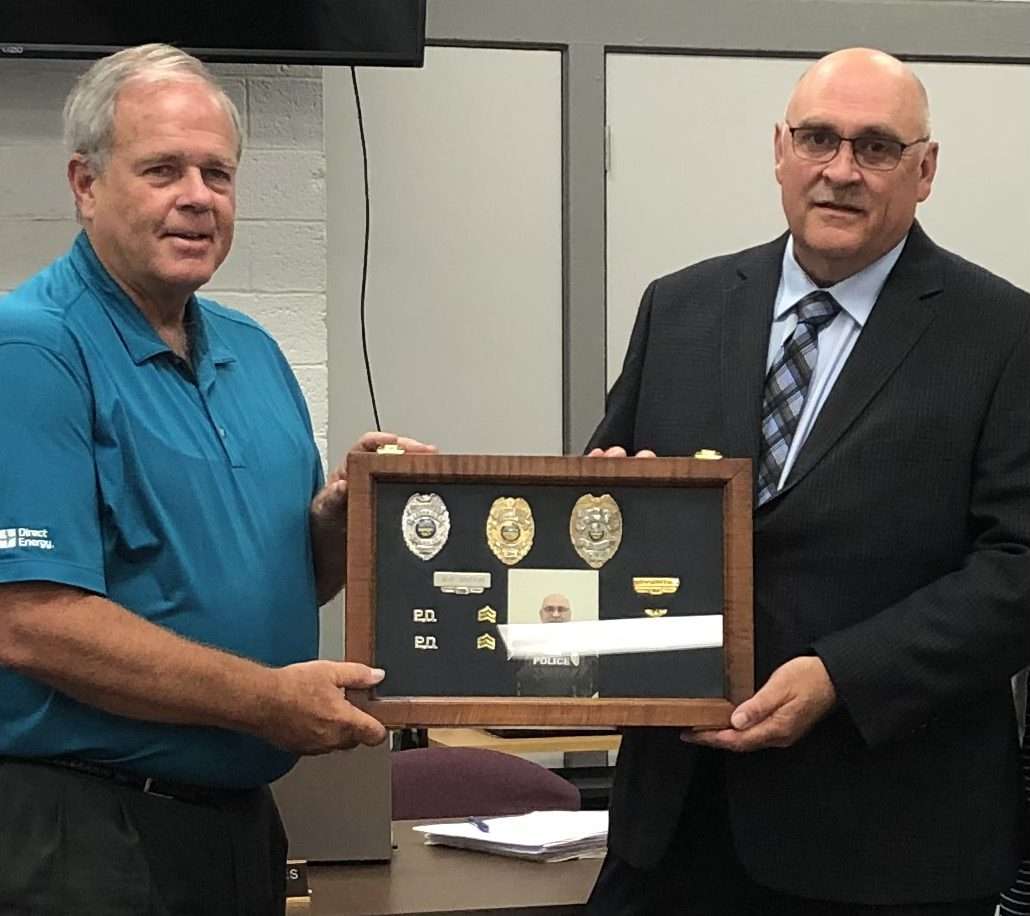 PRESENTATION TO GRIFFIN … At the beginning of the Edgerton Village Council meeting held on September 7, 2021, Mayor Bob Day presented a shadow box of his badges and pins, to outgoing/retiring Edgerton Police Chief Dan Griffin. (PHOTO BY REBECCA MILLER, STAFF)

Police Chief Dan Griffin was present with his family at the September 7, 2021 meeting of the Village Council in Edgerton, per request of Mayor Bob Day.

Mayor Day presented recently retired Chief Griffin, who spent the last few years as the Chief in Edgerton, with a shadow box display of his badges and pins. Griffin began his police career in 1992, coming on staff in Edgerton in 1999.

He was promoted to Sergeant in 2004 and moved on to be the Chief in 2017. The council accepted his resignation following an Executive Session at the August 4, 2021 meeting, reclassifying him to Patrolman until his retirement took affect on September 6.

Following the presentation, council went into their regular business for the evening. Part of that was to hear from Amber Simmons from NOCAC (Northwestern Ohio Community Action Commission) as she had been invited to inform the council of what is available for assistance in the county.

Ms. Simmons is an Edgerton graduate and was happy to share her knowledge with her hometown Village Council. Simmons shared about what is available in the six county area of Defiance, Henry, Paulding, Fulton, VanWert and Williams, for those who find themselves in tough situations financially.

She gave out phone numbers for each of those situations and also shared that NOCAC has millions of dollars of covid money to give out but that people are not applying for it.

She is concerned and frustrated that she can’t seem to match the money up with those who qualify. In January she will be offering classes called Bridges out of Poverty, as a certified trainer.

Edgerton Village Administrator Dawn Fitzcharles thanked her for coming and said that she would like to have the sixteen week class held in Edgerton for people who need to learn how to navigate life. Simmons said she would be happy to come there and teach the class.

In regular business, Mayor Day asked council to approve moving the Village Administrator off of probation and into the position fully as she has done an amazing job. Council did make that motion and approve it.

A Park Board meeting was scheduled for 5:30 p.m. on September 8, 2021 and a Tree Commission meeting at 6:30. The mayor gave an update that the park survey is moving forward.

Law Director Chris Walker handed out some information concerning a Park Board Guidelines draft. He stated that Edgerton has to follow the revised code as they are a statutory community.

There was some discussion about Halloween with no decision made for how to handle it this year. Mayor Day said he wanted to wait and would let everyone know what the game plan is going to be.
Fitzcharles gave her Administrator Report, informing council of the following:

-Aqualine Detection is now in the village, to pinpoint water leaks, so people will be surveying during normal working hours
-OPWC grant, for which she had been authorized to apply, for some street will be getting repaired with that money. She shared some specifics about the traffic on a certain street and that they want to resurface 2 1/2 inches and do some other repairs. It will cost about $350,000 and they have applied for half of that.

-Scrap drop off on Saturday, September 25, and electronic recycling. Mike Kimpel will also be there for the Edgerton Scrap Fund.

-Tree removal project will kickoff soon with Asplundh who will provide line service clearance. They are going to also work jointly with the village crew so people will see a lot of work going on

-She asked that residents be cautious as all these workers will be around and near the roads.

-Pricing is back from ODOT for the annual salt contract

-Update on the water main break was given. On August 10 they had an emergency main break at 6:40 a.m. and they all worked together to take care of it.

She thanked everyone who jumped in to help when that happened: Mayor Day, Jason Gruber, Leslie VanAusdale, Chuck Wallace, all of the village employees, Life Changing Church and their many volunteers, Edgerton Local Schools, Bryan Municipal Utilities and the Health Department and EMA. We made it out with everybody’s help.

She requested a change of the next council meeting date to September 28 at 7 p.m. and if there is not enough agenda, they could just cancel it and meet again on October 5.

Denise Knecht, Fiscal Officer, sent around the financials and informed council that she is working on gathering everything to make the 2022 budget. Council voted to pay the bills also.

Council voted to approve Resolution 2021-010 A Resolution authorizing the Village Administrator to apply for, accept and enter into a Water Supply Revolving Loan Account Agreement on behalf of the Village of Edgerton for the Water Tower Rehabilitation Project #2 and Declaring it an Emergency.

Fitzcharles clarified that they had applied to receive funding in 2022 for the 1 million dollar rehab project. Council had to authorize her to sign for the next stage to begin.

They will hear within the next 45 days if they will be funded by that grant. They have been approved for up to a million and will most likely have to borrow in the $250,000 range, she said.

An Executive Session to discuss the employment, compensation of public employees and to discuss confidential matters, was held before the meeting adjourned.