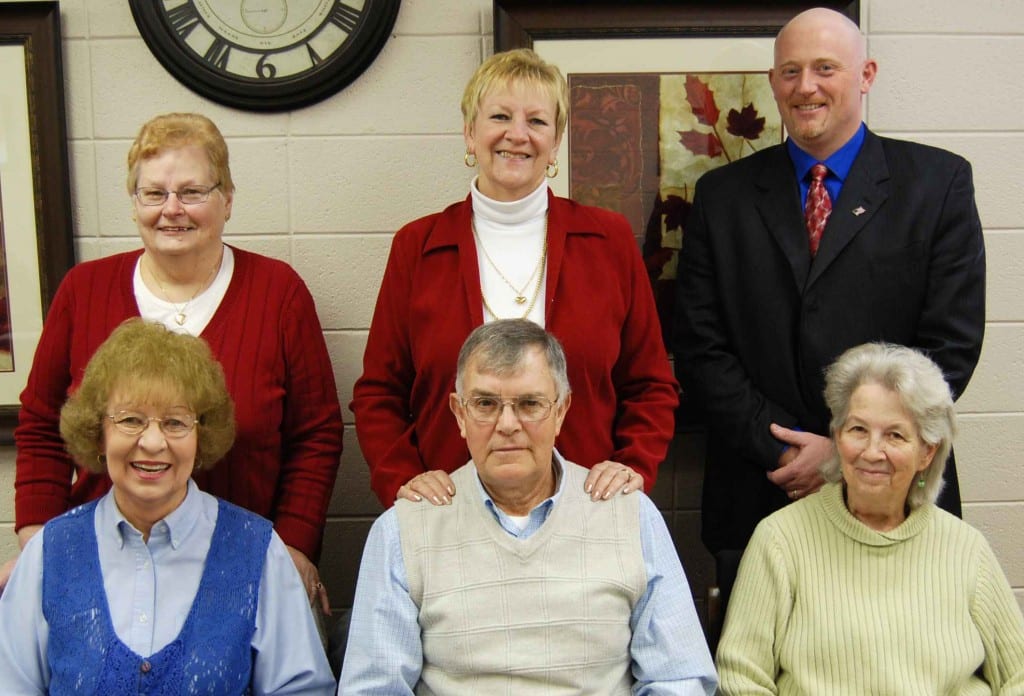 The Quadco Administrative Board reorganized for 2013 prior to their regular meeting on January 22 and retained their officers from the previous year. Barb Heer of Stryker will serve again as President, Jean Lightle-Jackman of Defiance will continue as Vice President and Gary Burr of Bryan remains the Secretary. Board members shown in the photo seated from left to right are Jean Lightle Jackman, Tom Eggers of Ridgeville Corners, and Barb Heer. Standing from left to right are Ruth Ann Osborn of Bryan, Tootie Bockelman of Napoleon and Gary Burr. Herb Gurwell from Delta and Barbara Grant from Sherwood are missing from the photo.

Grand openings are being held for the two additional SUBWAY® Restaurants now being operated by QuadcoRehabilitationCenter.

Executive Director Bruce Abell told members of Quadco’s Administrative and Non-Profit Boards at their monthly board meeting on Tuesday (Jan. 22) that the first grand opening was held this past Friday, Jan. 18, at the SUBWAY® Restaurant in the Bryan Walmart store.

Sharon von Seggern, who manages the stores, told the board members that there was a great turnout for the event and the store was busy all day long.

She said there were a lot of positive comments about the store and the mission of being both a restaurant for the community and a training program for the individuals from Quadco who work there.

Mr. Abell said that there will be a grand opening of the SUBWAY® Restaurant in the Defiance Walmart store this Friday, Jan. 25.

Quadco has owned and operated the SUBWAY® Restaurant in Stryker since 2005. When it opened, it was the first SUBWAY® Restaurant ever to be operated by a rehabilitation center as both a restaurant for the community and as a training program for individuals with disabilities.

Then, towards the end of last year, Quadco was able to procure two additional SUBWAY® Restaurants in the Bryan and Defiance Walmart stores. Since that time, they have been training their staff and preparing for the time when they could hold their grand opening events.

When he first made the announcement of the stores purchase, Mr. Abell noted the importance that the Stryker store has had to those who work there.

“Just as we thought when we first opened the restaurant, the training people have received has proved to be a valuable way to help them get a job in their local community,” he said.

“In addition, we have found that workers like to meet and greet the many people who come by for a meal, and we expect that will take place even more with the new locations as they see their friends stop by when they are shopping and visit the store,” he continued.

Bill Priest, Director of Marketing, told the board members that there is a grand opening special for those who stop by the store in the Defiance Walmart on Friday, as well as coupons that can be used later.

The board members will be holding a planning session in April. Mr. Abell noted that the annual planning session for the board is scheduled for their April 23 meeting. The business for that day will be curtailed and the meeting will focus on issues facing the board in the future.

Mr. Abell acknowledged several donations recently made to the center. Brian Rupp of Door Works in Stryker donated a new wheelchair and a large white board to the center.

Mr. Abell also pointed out that GenFed Financial credit union in Bryan presented Quadco with a check for $910 from a raffle of a large gift basket held at the credit union during the holidays.

He said the center appreciates the generosity of all the people involved who made the donations possible.

The board welcomed two visitors to the meeting. Tim Price is a Training Specialist at Northwest Products and Crystal Sweebe, a program participant, who spoke about the programs and activities she enjoys at the center.

At the board reorganizational meeting held just prior to the regular meeting, the board members decided to retain their present officers for 2013. Barb Heer of Stryker will continue as board president, Jean Lightle-Jackman of Defiance will remain as vice president and Gary Burr of Bryan will serve as secretary once again.

During the reorganization, the board members affirmed the EEO and affirmative action policy and letter, reviewed the mission statement and accessibility plan, and approved the board by-laws with no changes.

The board members voted to continue to hold their meetings on the fourth Tuesday of the month at noon in the Stryker conference room except for the month of December when there will be no meeting.