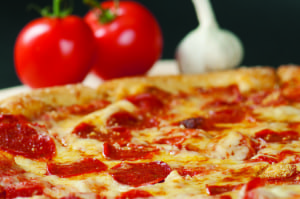 A Stryker pizza shop that also serves as a place of training and integrated community employment for people with disabilities had the most net sales of any store in their franchise last year.

Board members of Quadco Rehabilitation Center learned at their joint administrative/non-profit board meeting on Tuesday (Mar 26) that the Mama DeLuca’s® Pizza Now! store in Stryker led all of the franchise’s stores in net sales in 2012.

Quadco Executive Director Bruce Abell was pleased to see the store achieve such an honor.

He said there were several factors that contributed to the store’s success.

“The deals are good there. The dining room is a nice place to sit down for a meal, and the food is good,” he pointed out.
He also said how much he appreciates the support that comes from the community for the store and its mission.

Sharon von Seggern, manager of the pizza store as well as the SUBWAY® Restaurants operated by Quadco, also informed the board members that the Stryker Mama Deluca’s® had the greatest percentage of growth of any franchise store in the past year.

The restaurants operate as both restaurants for the community and as a place where individuals with disabilities receive job training while working in an integrated community setting.

The restaurants also hire other people from the community, so those in training get to work alongside people from the town.
Currently Mama DeLuca’s® Pizza has 52 stores across the country and continues to expand the franchise into more communities.

Aside from the restaurants in Stryker, Quadco recently acquired two additional SUBWAY® Restaurants in the Bryan and Defiance Walmart stores that are operated in the same manner.

Mr. Abell reported on “The Ride,” the new public transportation system Quadco operates for people in Williams County.
He said the system has been getting more interest and ridership is gradually increasing more and more each week.

He reviewed the brochure with the board members pointing out that when people call their toll-free number at 888-982-1011, they will speak to a person who can schedule their trip and answer questions they may have about the service.

The brochure is also available on Quadco’s website at www.quadcorehab.org.

A representative from Quadco is participating in a statewide training initiative. Mr. Abell reported that the center was invited to have a person join with staff members from county boards around the state who are participating in an initiative called, “The Good Life.”
Mr. Abell said the initiative is a comprehensive expansion of the statewide emphasis on positive culture and he was glad to be able to have Quadco represented in the 16-day training program.

Two participants in Quadco’s programs were welcomed at the board meeting. Mr. Abell introduced Chris Tomlinson and Kevin Heer to the board members.

Mr. Tomlinson said he is a fan of the Bryan Golden Bears, drag racing and Elvis Presley. He last saw an Elvis impressionist in Nashville and toured Graceland in Memphis.

Mr. Heer is often seen at Stryker ball games and is a NASCAR fan, especially of driver Kyle Busch.
Mr. Abell told the board members that there has been an increase in work at the center, and they continue to provide a number of planned activities and a make a variety of programmatic options available.

Program Director Philip Zuver reported that the NASCAR Club is the most popular at Northwest Products. He said individuals have been having regular weigh-ins when the Healthy Choice Club meets, while other people have been choosing to make tiny gardens or volunteering at the Care and Share 1,000 Villages shop in Archbold.

Stryker Program Coordinator Jessica Douglass said that individuals have been participating in the Art Club, Book Club, Exercise Club, and the Men’s and Women’s Clubs have gone bowling and to a used book store in Toledo.

She said members of the Senior Activity Center made bird houses, took a trip to the new Defiance Center, the library and community Lenten lunches and celebrated the 58th birthday of the doll, Barbie, by making a birthday cake.

Members of the Defiance Center are also participating in the Art Club at Stryker, have been out bowling, shopping and making trips to the library.

Be the first to comment on "Quadco’s Mama DeLuca’s® Pizza Now! Store Tops In Sales"