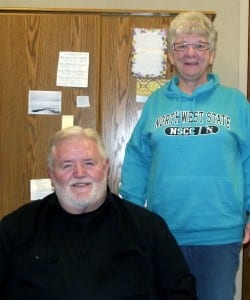 REACHING OUT THROUGH REACH UP …. CCNO Chaplain John Cattell and Jackie Keefer-Tate, president of the Reach Up board head up the spiritual aspects of life at the regional jail.

When Reach Up, Inc. began in 1984 it started out with 20 volunteers whose goal was to counsel inmates at the Williams County Jail. “Right now we have about 170 volunteers who come out and ‘do church’ for us,” said Reach Up Board President Jackie Keefer-Tate. “Almost every day of the week there is a church service to be done by different churches from five different counties.”
The growth in volunteer numbers can be partially attributed to the group’s change in focus from the single county Williams County Jail to the five county Corrections Center of Northwest Ohio (CCNO). The five counties served by CCNO are Defiance, Fulton, Henry, Lucas and Williams and the facility is located between Archbold and Stryker. In its first two years it grew from 20 volunteers to 60 with an operating budget of about $25,000 which was donated by area churches and private contributors. By 1986 Reach Up offered Bible counseling, men’s fellowship, addiction treatment and interdenominational church services.

While Reach Up begins its work in the confines of CCNO, it is not limited to the inside of that facility. One of its goals is to ‘develop aftercare programs which provide a system of transition for men and women taking the steps back into society’. “The vision is not only to while they’re there give them the word but to follow up on them if and when they need help afterwards,” Tate said. “That’s a lot of the extra programming that goes on that people don’t know about. I mean, you come to a service and you get out and if you don’t have a support group or a mentor or some kind of established church home – a foundation to start on – then you’re just going to go back to the same old, same old.”

Tate, herself, is the director of a ladies transition rehabilitation center. “I make all my girls go to morning prayer,” she said. “I think it’s really important to have that substantial base and learn because most of these people that we deal with come out of jail and they have no upbringing or no knowledge of good and evil. They just know evil.”

Both Tate and CCNO Chaplain John Cattell stressed the importance of following up in the successful rehabilitation of the inmates they deal with. “For a while they made it a little difficult because you couldn’t follow up,” Tate said. “If you were a volunteer and you went out to do church, they didn’t want you following up until six months after they were out. That makes it difficult because you want to see them succeed. That has since changed. They can go to church and be mentored once they get out.”

Reach Up has several pressing needs going forward. First, there is a great need for finances to keep the ministry going. Currently, the major fundraiser for Reach Up is the annual banquet but the last few years it has fallen far short of the needs. “It’s just like any mission, any church that people support. Ministries need support,” Cattell said. “We’re helping to make the community safer, better. The first few years Reach Up ran on a budget of about $25,000 which was all raised at the banquet. The last couple of years we’ve raised about $6,000. It’s really been down.”

Another need is for younger people to join the work of Reach Up. “There are many ways that people can be involved without going into the jail,” Tate said. “There’s something out there good being performed.”

“Reach Up supplies the chaplain and provides spiritual guidance at the jail,” said Chaplain Cattell. “It’s an important ministry to the jail. They are very supportive of us being there, coming in. Our volunteers that are doing services every day or going in the units give the people there someone to talk to. Actually, what they tell us is it keeps the jail calmer. They have someone to help them deal with their frustrations or questions.”

Each volunteer with Reach Up is considered a chaplain with Cattell serving as ‘Head Chaplain.’ “They can go into any of the units to talk with the people where there at,” Cattell said. “It doesn’t have to be just at church services.”

“And, sometimes people just have questions and they need answers,” Tate said. “Volunteers can go in and do a Bible study. Essentially, Reach Up is in charge of the spiritual bond at the jail. The recidivism rate at the county jails is higher than at the prison because of the longer terms at the prison. That’s where they need to be educated. They need to know that they don’t have to come back constantly, that there is a different way, a different lifestyle.”

Reach Up’s board consists of one person from each county. Tate serves as president of the board and joining her at the executive level are: Tom Salpietro, vice president, Toledo; Kent Roth, treasurer, Archbold; Arlene Iler, Secretary, Defiance. Rounding out the board are Baldemar Bejarano, Defiance; Marlin Klopfenstein, Wauseon; James Scruta, Napoleon; Linda Shambarger, Stryker; John Widmer, Montpelier and Doris Klopfenstein, Archbold. Most board members began as volunteers but not all.
According to Chaplain Cattell, Reach Up has almost 40 different things they offer every week. “There is a church service every day and there are other programs, too,” he said. “There are classes on alcohol and drug treatment, life skills programs for men and women, quite a few different things like that.”

CCNO is considered a jail, not a prison. “Seldom are they there over a year,” said Chaplain Cattell, “because either their case is resolved and it’s a short term or they are sent to prison and they leave for prison from there. They may be there a while if their cases drag on but more than likely the long term stays are done within the prison system.”

Cattell stated that he follows the people that leave CCNO to go to prison. “I email in to them trying to keep a dialogue going so they still know we’re out here if they need help when they get out,” he said. “Sometimes that’s a year or two or some I’ve been writing to for six or seven years. We try to meet their needs. When they go home we try to be there. If they go to prison we try to be there.”

Not only does Reach Up minister to those in the jail, they also host support groups for the families of those incarcerated. “We started this about a year and a half ago,” Cattell said. “The support group is for parents or family members who have people in either jail or prison. One of our volunteers had a son in prison but they had nobody to talk to about it. Their family didn’t want to talk about it, they didn’t want their neighbors to know and the lady – her son had been in for five years – and for five years she had to sleep with the light on and the TV on just to get through the night. We started the group because of them and in three weeks she was able to sleep without the TV on all night, just because she had someone to talk to. Just being able to talk about it is everything because they’re in prison, too. When they get sentenced, their family gets sentenced.”

Tate speaks to this from personal experience. “I have a son who’s in prison doing 25 to life and I have a friend whose son is in prison and we just felt abandoned,” she said. “We started a support group and we send cards and spiritual support to people who are in prison and we also support family members. It’s hard on a family when this happens to you. You don’t really know unless you’ve been through something like this exactly what changes and what goes on. This destroys many facets of family life. The personal relationship is gone but God is there and if I wouldn’t have had God and the support, I don’t know what I would have done.”

Chaplain Cattell also has personal experience, although his was as an inmate at CCNO. He had recently received a call from a judge who was agonizing about whether the sentence he handed down was the best thing for a gentleman at CCNO. After discussing this with him, Cattell then said, “19 years ago you sentenced me to CCNO and now I’m back here as lead chaplain. I never thought I’d be a pastor and I sure never thought I’d want to go back into CCNO. I told him it was the worst thing that happened to me but it was also the best thing. He said he doesn’t always know if he’s made the right decision but to hear back that I needed that right then, that it was a good thing made a difference for him. How many people come to the Lord in CCNO? They come to me crying and I tell them, I know you don’t want to be here but would you be in a church service tonight and would you have gotten saved if your weren’t here? It’s a great place to take the Lord to them because a lot of them are open and receptive.”

Cattell stated that over 52,000 people are incarcerated in the state of Ohio alone with about 600 in CCNO. “People just don’t realize or think about the prisons. We’re all in our own little worlds and we just don’t pay attention to the need that is there. Prisons that had 2300 people in them are now up to 3,000 because more and more people are going in.”

“If we don’t help change lives, who’s going to do it? How are they going to know?” Tate said. “If it’s not up to us as God’s people to give them the message, to share His love and know that there is a different way for them to live then it’s all in vain. I’ve had a girl who was 10 years in and out of CCNO. Ten years straight. Started drugs at the age of 10 and prostituting at 12. She changed her life, went through a program, is married, just bought a vehicle, and just bought a house.”

“She was at all the services at the jail for 10 years and finally, after 10 years, decided ‘I’m tired of living like this’ and turned her life around,” Cattell said. “What if we’d given up on her after nine years? You just can’t give up on people. That’s why you have to go and why you have to keep going.”

“We all have a past. We all could have been there but by the grace of God we aren’t,” Tate said. “The volunteers are so important for the changing of lives. If it hadn’t been for Reach Up there wouldn’t have been a program for this girl to go to for 10 years and there wouldn’t have been the help out there for her. If you can save one life it’s all worth it. I know it’s not us that do the saving but the Lord uses us as His vessel. It’s an awesome feeling to be a vessel God can use to save a life.”

1 Comment on "Reach Up, Inc. Ministers To Inmates’ Needs At CCNO"