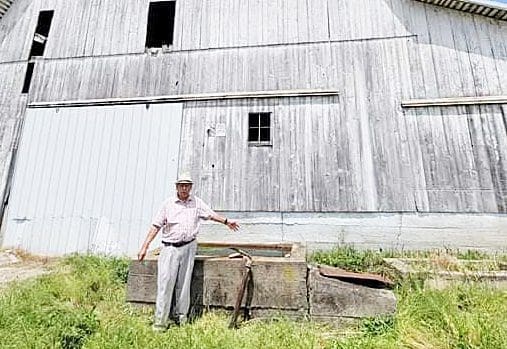 THE BIG BARN … Roger stands on the south side of the big barn next to an artesian well on the property. (PHOTO PROVIDED)

After nearly a lifetime of international ministry efforts, Roger & Suzanne Doriot have moved back home to Roger’s rural Fayette family farm where they hope to be able to give back to their Fulton County community.

“We appreciate all that the Father has done for us and what so many people have done for us,” Roger went on to explain during the interview.

Before returning to Northwest Ohio, the Doriots spent nearly 47 years as missionaries in Papua, Indonesian New Guinea where they helped with education and other needs in that area.

In 2022, the husband and wife team moved back to the Doriot Farm outside of Zone on County Road L between Bean Creek and Tiffin River.

Roger, who lived on his family’s farm until he graduated from high school, remembers raising produce with his brothers, Leslie and Veryl, to sell in Toledo as well as in many neighboring small towns.

The Doriot Farm story began when Roger’s great-great-grandfather, Gustave Doriot, immigrated from Switzerland and settled the plot in 1861.

The property has remained in the Doriot family since it was established, except for 1921-1933 when another family took ownership before being purchased back by the Doriots.

The farm features a two-story house that now serves as the couple’s residence, two barns, and it sits on 100 acres. The Doriots would like to use their home and farm as a part of their ministry.

The Doriots also wish to share their property with the Fulton County community, and they are open to suggestions from the public.

Over the last few months, the Doriots have reached out in Fulton County Facebook groups and conducted open houses on the farm to generate some ideas from the community.

One popular suggestion that has been brought up by many is using the farm as a community garden location.

While no concrete ministry or community plans have been decided for the property, the Doriots welcome input from anyone who has ideas for potential community use.