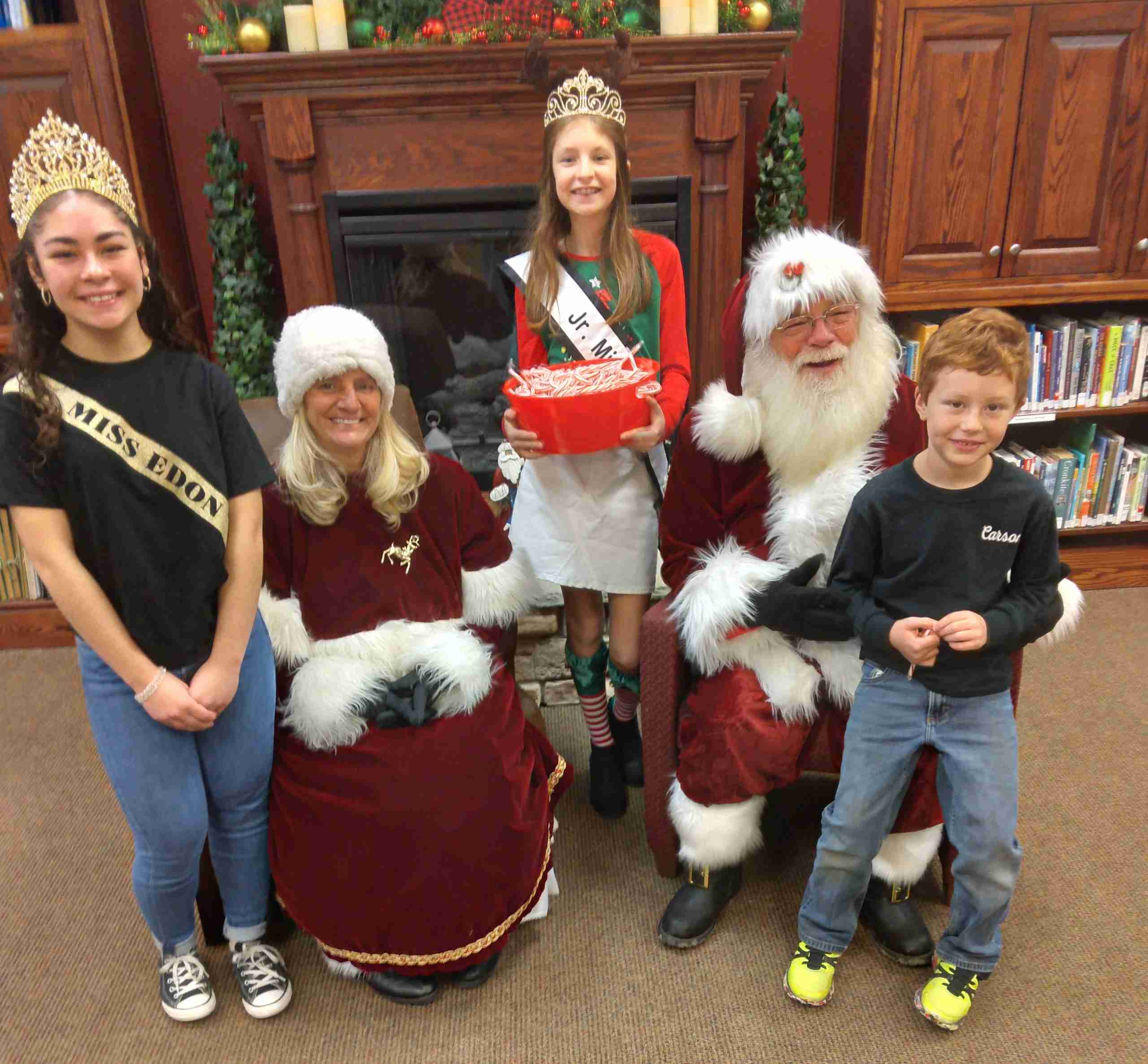 MEETING SANTA … The popular meet Santa at the Edon Library was expected to have around 350 children meeting Santa. Pictured in front of the fireplace at the Edon Library are, Left to right are Desiree Dunkle, Mrs. Claus, Clara Reitzel, Santa Claus and the first one to sit on Santa’s lap, Carson Reitzel. (PHOTO BY DAN COOLEY, STAFF)

After a one year hiatus, Santa Claus and Mrs. Claus are back at the Edon Public Library. Because of COVID, the only place Santa could be found last year was at the Edon Community Building.

Children could only wave from their parents’ cars as their parents drove by and the children dropped off letters to Santa. “(The good news is that) Santa answered each child’s letter,” said Jim Whitman, Edon Chamber of Commerce President.

This year’s meeting, back at the Edon Library, took place on Sunday, November 28, from 3:30 p.m.-5:30 p.m. “We usually hold the meeting later and not the first weekend after Thanksgiving,” Whitman said. “But Santa has a busy schedule and sometimes you have to abide by that.”

he children just like the chance to meet Santa in person. “I like this year better, because I got to sit on Santa’s lap and tell him what I wanted for Christmas, which is Hot Wheels cars and a track,” said Carson Reitzel.

Along with getting a chance to personally speak with Santa, there were plenty of other things for the children to do, while at the library.

First of all, after speaking with Santa, two princesses, either Miss Edon’s Desiree Dunkle, or Junior Miss Edon’s Clara Reitzel, passed out original red and white candy canes to the children.

Children could also relax and eat cookies and get a drink, while, depending upon what time they arrived, either watch Frosty the Snowman, Rudolph the Red Nosed Reindeer, Charlie Brown Christmas, or the original Grinch Who Stole Christmas cartoon.

In addition, children could go to a coloring station, have their picture taken with Santa and make a craft, which could include making a picture frame for their Santa photo. Also, they could take home a free book and at 5:00, listen to the Edon Junior High Choir sing Christmas carols.

“It’s a nice, intimate setting, with Santa in front of our fireplace and Mrs. Claus is also very approachable,” Jewell said.