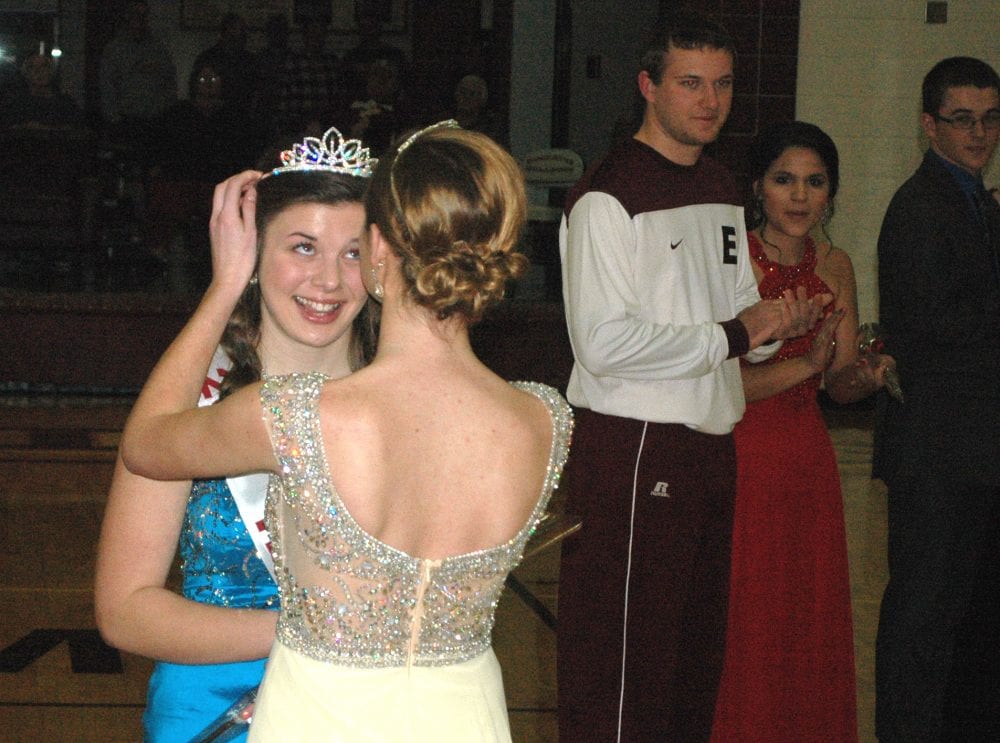 The announcement came in a special event between the junior varsity and varsity boys’ basketball games against Hilltop.

Connor Landis was named king Feb. 3 at the Homecoming Assembly.

Roth is the Spanish Club representative. She is the daughter of Adam and Denise Roth. She has four brothers, Greg, 16, Elliot, 14, Nicholas,13 and Owen, 11.

She has been involved with the National Honor Society, FEA, Spanish Club, Yearbook, class officer, cross country, basketball and track.

In her spare time, she watches Netflix, basketball games and spending time with her cousins and goddaughter. Her favorite class is Spanish 4 and her favorite teacher is Mrs. Muehlfeld.

Connor is the NHS representative. He is the son of Jack and Shelly Landis. He has three siblings: Chelsey, 28, Cassie, 27 and Miranda, 22.

Connor has been involved with FEA, FFA, NHS and basketball. He enjoys fishing, hunting, going to sporting events and spending time with his friends.

His favorite class is Study Hall and his favorite teacher is Mr. Barbour. Connors wants to attend IPFW and major in business management.

Cade McClellan, FEA Representative, escorted Roth. He is the son of Kevin and Linda McClellan. He has one brother, Chase, 20.

Cade’s favorite class is weightlifting and his favorite teacher is Mr. Barbour.

Another queen candidate was Brandi Radabaugh, NHS Representative. Brandi is the daughter of John and Jodi Radabaugh.

She has been involved with NHS, FEA, FFA, class officer, Spanish Club, Yearbook, cross country, basketball and softball. In her spare time, she enjoys going to the movies, out to eat and watching the Ohio State Buckeyes.

Her favorite class is Food Science and her favorite teacher is Mrs. Schaefer.

Brandi will attend Bowling Green State University, but has not declared a major.

Her senior escort was Devin Herman, Spanish Club Representative. He is the son of Phil and Chris Herman. His siblings are Austin, 22, Brandon, 21, Cody, 20, Eric, 15 and Faith, 14.

He has been involved in NHS, FEA, FFA, class officer, Spanish Club, football, basketball and track. His free time is taken up with playing Xbox, spending time with Mrs. Cooley in the library and hanging out with his friend Cade.

Devin’s favorite class is AP Chemistry and his favorite teacher is Miss Schaffner.

Queen candidate Leiah Fritch was the Girls Basketball representative. She is the daughter of Steve and Lydia Fritch. She has a sister, Madissen, 15.

Her activities include NHS, FEA, Spanish Club, Student Council, volleyball, basketball and track. She likes to watch Grey’s Anatomy, go shopping, taking her dog Charlie for walks and spending time with her boyfriend.

Her favorite class is AP Chemistry with her favorite teacher Miss Schaffner.

Leiah will be attending Otterbein University majoring in nursing.

Queen candidate Trinity DeLuna is the choir representative. She is the daughter of Amy Monforton and Doug Flegal. She has three siblings, Kierstin, 20, Lilli, 16 and Colton, 10.

She has been involved in cheerleading. She likes to nap and shop.

Her favorite class is Sculpture and her favorite teacher is Mrs. Bostater. She plans to attend Trine and major in Biology.

Trinity’s escort was Drew Hug, Choir Representative. He is the son of Nick Hug and Brian and Amanda Murphy. He has three siblings: Bree, 15, Briele and Isabel Murphy, 7.

He has been involved with FFA, golf, baseball and basketball. He likes to play cards and pool with his friends.

His favorite class is government and his favorite teacher is Mr. Davis. He plans to find a job after graduation.

Queen candidate Megan Bowen, yearbook representative. She is the daughter of Pete and Jane Bowen. She has three siblings: Jared, 24, Bailey, 16 and Elissa 11.

Activities include NHS, Spanish Club, Student Council, yearbook, basketball and volleyball. She enjoys watching Grey’s Anatomy with friends and helping her dad at his clinic.

Her senior escort was Nick Nye, FFA representative. He is the son of Tim and Lisa Nye. He has one brother, Nathan, 19.

He has been involved with 4-H, FEA, FFA, NHS, football and wrestling. He likes hunting and fishing. His favorite class is ceramics and his teacher is Mrs. Schaefer.

Nick will attend BGSU and major in education and human development.

Last year’s king and queen, Alex Michael and Natalie Landel were on hand to give up their crowns. Landel is studying accounting at Trine University. Michael is attending IPFW is also pursuing a degree in accounting.

They were accompanied by kindergarten attendants Amelia Giesige and Keegan Hoffman. Amelia is the daughter of Josh and Amanda Giesige. Amelia’s favorite color is yellow and her favorite TV show is Tom and Jerry. She likes to play Wii Bowling.

Keegan is the son of Morgan and Edward Hoffman. His favorite color is blue and his favorite movie is BFG-Big Friendly Giant. He enjoys playing on his tablet.

Keegan has one sister, Tristyn, 8.