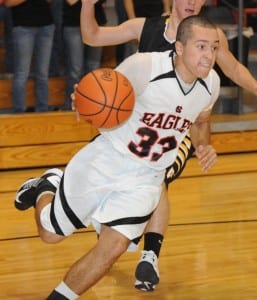 WEST UNITY – The Hilltop Cadets got a game-high 20 points from gunslinger Payne Sentle against North Central on December 13. The problem with that is that the rest of his team was only able to contribute a combined 21 to the cause. The Eagles balanced attack proved to be the difference as they came away with a 48-41 BBC win.

North Central took an early lead, and turned it into a 21-9 score at the half. By the time that Hilltop started to mount their rally in the third, they were already in a huge hole that they never escaped.

Jalen Dancer led North Central with 12 points, while Clayton Ferguson and Cam Cochran each added 8. Alex Lantz and Josh Taylor had 6 points apiece, and Branden Turner and Brandon Geiser each had 4 points.

Sentle was backed by Kayne Grime with 8 points, Brandon Willis and Joe Mohr with 4 points apiece, Jalen Towers with 3 and Xavier Lowery with a deuce.