Shoot Or Don’t Shoot, That Was The Question For People In Wauseon 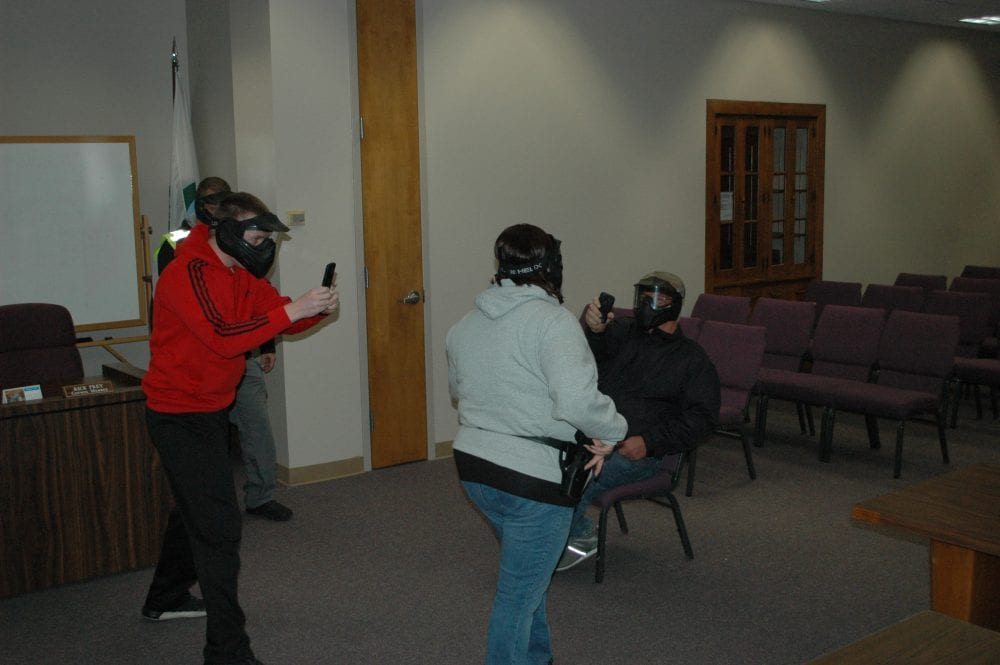 Police officers are often in situations where they must make split-second decisions on whether to fire their weapons at a suspect.

Sometimes they are justified and other times not, but when a quarter-second makes all the difference, it’s easy for the media to blow a situation out of proportion and second-guess the decision. Should an officer shoot or not?

That was the question put before 30 Wauseon-area people Nov. 3 who took part in “Use of Force: Shoot or Don’t Shoot” an interactive demonstration of real-life scenarios faced by officers across the country. The event was the first of its kind for the Wauseon police, but it won’t be the last.

The class filled up quickly and left a waiting list of 15 people who could not participate, Police Chief Keith Torbet said.

Those that made it were thrust into the shoes of police officers and confronted with one of 25 scenarios faced by real cops somewhere in the nation. Each situation dealt with officers deciding whether they will shoot or not and dealing with the consequences of their actions.

“We will put you in our shoes,” Torbet said.

The class was led by Lt. John Roof, and supported by several other officers and Explorers who role-played the bad guys and bystanders for the various scenarios. The participants all played police officers and were armed with air-soft Glocks that fired 5.97 mm pellets.

The only point of a scenario was whether to shoot somebody or not. There were officers on hand as observers who could provide general instructions, but nothing direct. Each participant had to decide whether they should shoot or not.

There was to be no assaults, hitting, wrestling or punching of suspects or the officers.

Some of the scenarios asked the question of whether it is OK to shoot an unarmed suspect? Others factored in witnesses who lied about what they saw.

Sometimes an officer’s life was threatened, others the scenario called for talking a person down.

The role-players said they could relate to the scenarios because many of them had actually happened to them or somebody they knew.

The suspects ranged from a homeless man who wouldn’t leave a porch of a residential home and who came up shouting about having the U.S. attorney general’s phone number on speed dial.

Others had people using their phones to film instances of police “brutality” and trying to intimidate an officer. Another had a suspect where the officer was justified in shooting him, but the witness said the suspect had a Bible, not a gun in his hand.

The Wauseon City Council chambers served as one setting for the scenarios, while other rooms filled as needed.

Following everyone going through a scenario Roof and the officers debriefed the participants on the real-life experiences and the science behind the scenarios.

Many people said they were nervous during the scenes and Roof told them that was a perfectly natural reaction. They weren’t expected to respond like officers, just to see what it was like, he said.

Some didn’t want to shoot the suspect, even though they were justified in doing so. Their decision was based on not wanting to be the next target of the media. Something that happened to a Chicago officer a few weeks ago.

That officer instead was severely beaten by the suspect and others for her hesitancy.

Time, or the lack of it, plays a large role in the decision-making process of an officer. When an officer goes into a situation, it is generally ambiguous and the goals unclear, he said.

“Anything the police do takes time,” Roof said. “Blinking takes one-third of a second.”

The short amount of time that reactions take are often not noticed by the media or the public in the aftermath, Roof said.

A suspect could appear to be shot in the back, but their shot came from the officer before turning around and running. The officer responds to the shot being fired and by the time they have brought their gun up and fired, the suspect’s back is facing him.

Identifying whether a suspect has a gun or a real gun is challenging. Some guns look like something else and the bad guys have been painting the tips of their guns orange to throw off the police. Often, the suspect will start shooting as soon as they take their gun out of their waistband, Roof said.

“You people gave it your all and listened great,” Roof said. “You took it seriously.”