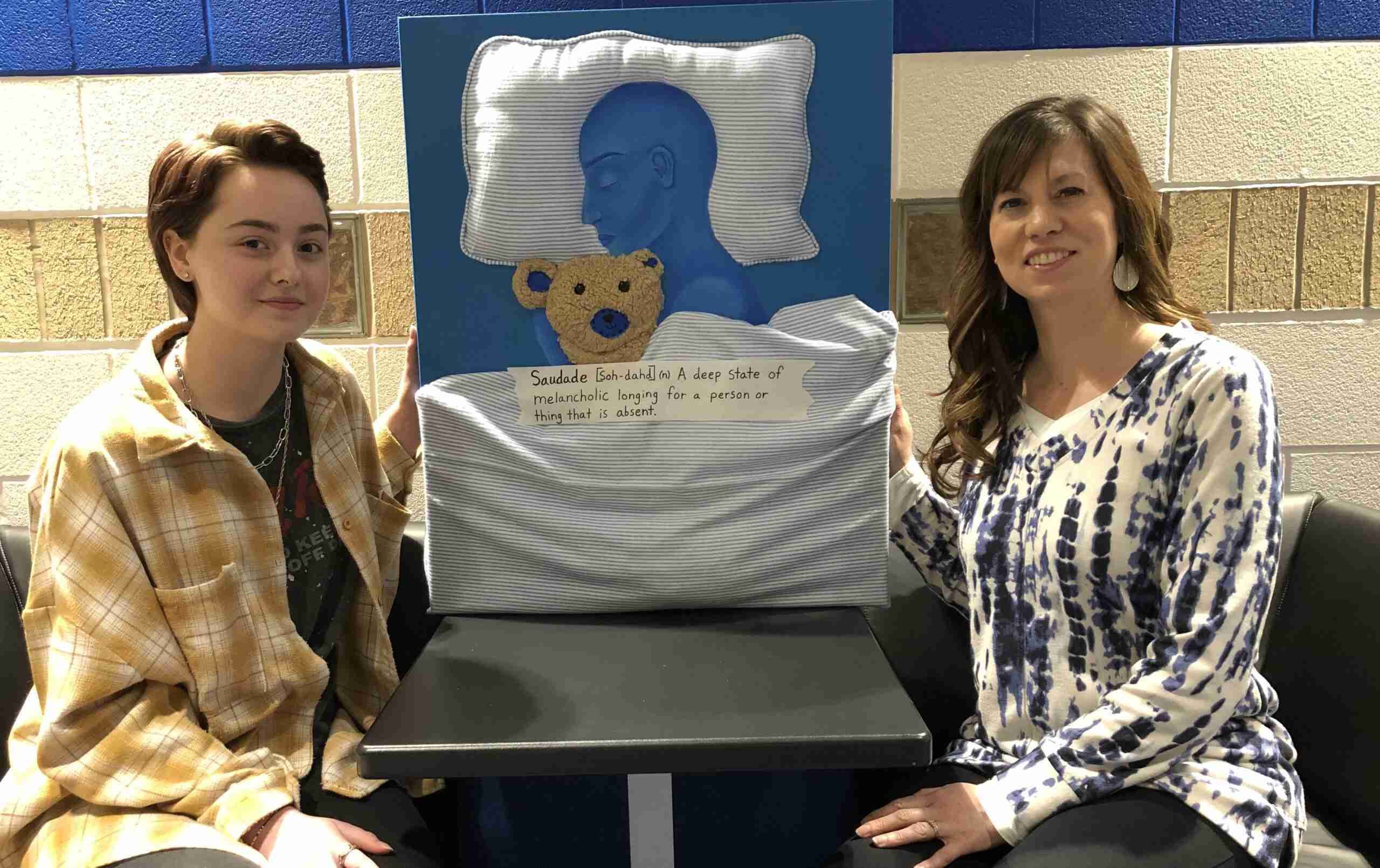 PROUD MOMENTS … Senior Stryker Art student, Victoria Bost, is seen here with her Art Teacher, Mrs. Laura Moser, in The Commons at the High School. This art piece is called “Succor Blue” and is made of shades of blue fabric, and an outline of a sleeping person with a teddy bear. Succor means comfort and this piece definitely exudes that feeling. (PHOTO BY REBECCA MILLER, STAFF)

One of the frustrating aspects of life as the country dealt with Covid-19 during 2020 and 2021 was how many important events either got dropped completely or were moved to a virtual setting.

Everyone tried to do the best they could under the circumstances, but it just wasn’t the same. One such incredible accomplishment that got lost in the shuffle was gained by Stryker High School Art Student, Victoria Bost.

Victoria is now a senior and will be graduating with the Stryker Class of 2022, so it seemed a fitting time to bring to light some of those amazing moments that went unnoticed.

In December of 2020, Victoria submitted her acrylic painting with embroidery (mixed media), called “Rainbow Connection.” When speaking about this piece, Victoria said that she had no underlying agenda.

She was just having fun with the rainbow colors and also wanted to try her hand with darker skin tones. Considering it was her first time to try that, she did tremendously well, winning a great award for her efforts.

For the region in which Stryker participates with art, the Fort Wayne Museum of Art received 1,410 individual art submissions, of which 417 were awarded a Gold Key, Silver Key, or Honorable Mention.

Victoria Bost was awarded a Gold Key award for “Rainbow Connection” and an Honorable Mention for a charcoal/pastel piece called “Translucent Stripes.”

But wait, there is more! Victoria was also nominated for the prestigious American Visionary Award for “Rainbow Connection”, along with only four others from this region.

These five were labeled “Best of Show” and even though she did not win that award, her piece was sent on with the other four to compete in the National Scholastic Art Show for 2021. Across the nation, all Regional Gold Keys go to Nationals.

For her Gold placement, she was given a Gold Key award and recognized for her American Visions Award, at the 2021 Regional Awards Ceremony on Sunday, February 14, 2021.

Her artworks, along with an Honorable mention earned by another Stryker 2022 Senior, Karina Guthrie, (water color/ink piece called “All Seeing”) as well as other regional artwork, were placed on exhibit at the Fort Wayne Museum of Art for the 2021 High School Scholastic show which ran from February 13- April 10, 2021.

This is where it was a little disappointing for them. As thrilled as they were, they did not get to go to New York City for the National Scholastic Arts Gala and Awards Ceremony that is normally held.

COVID stole that from the hundreds of art students across the country who had looked forward to the excitement of that moment, but she did get to be a part of online ceremonies for Regional and National results.

Mrs. Moser could not say enough about how amazing this award was for Victoria, for herself and for the Stryker Schools. “This is the biggest national honor any art student has ever received during my twenty years at Stryker,” she said.

Moser was also given a gold medal when Victoria received hers, as she was the Educator/Teacher who helped her get to that point. She proudly has it hanging on the wall in the Stryker Art Room.

Besides being awarded a plaque for her Visionary Award and the Gold Key, regionally, Victoria was asked to create a video which was put into the virtual show online for Scholastics;for Nationals she and Mrs. Moser were each awarded their own gold medal; Victoria was given a sign to put in her yard and tickets to see the show; and Her artwork was printed in a book called Best Teen Art 2021 for Scholastics, as well.

Victoria is very happy about all that has happened as Art means the world to her. She is very serious about Art and said that one of her favorite things to do is to wander around alone in a Museum of Art, taking her time enjoying each piece.

“I can spend hours in a museum,” she said adding that she prefers to be alone as she doesn’t want to talk about it, just soak it in.

Another thing she loves is doing Mixed media art pieces. With “Rainbow Connection” she painted the picture first and then embroidered a number of sections of the piece, including the lips of the lady, the head piece, the leaves and vines. It is a bright, colorful piece of art, reminiscent of things seen in the Dominican Republic.

This year has been full as well for Victoria as she has enjoyed taking three art classes with Mrs. Moser. They reminisced that she was in Mrs. Moser’s art classes in the 4th grade, one semester of 8th grade, and has taken Digital, 2D, Glass and Independent class (twice) during her high school years.

She spent half a year in Bryan as she wanted to finish out the year with virtual classes, but then decided to come back to Stryker because she wanted to continue her study under Mrs. Moser. 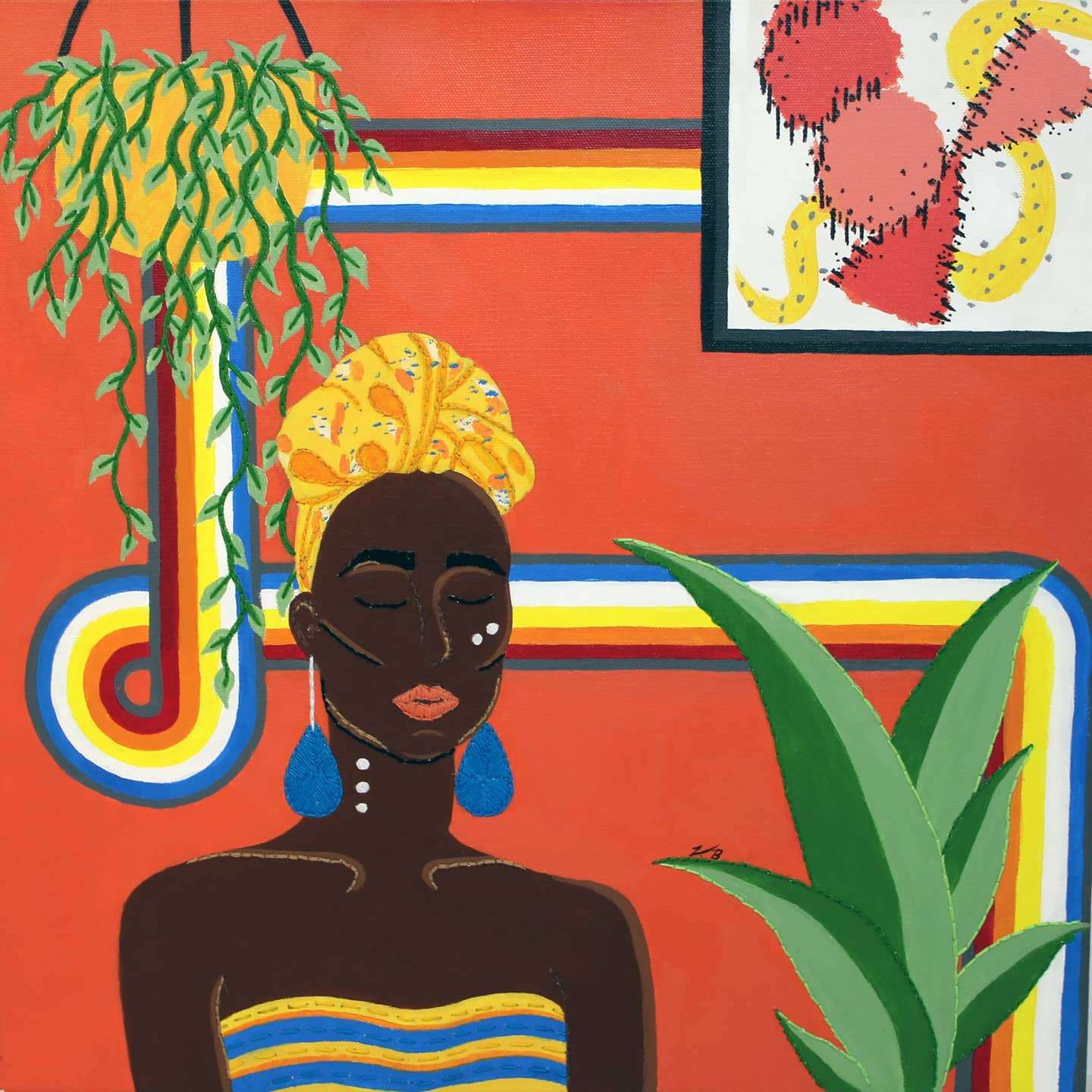 “RAINBOW CONNECTIONS” … This specific piece of art has won the artist, 18 year-old Victoria Bost, a Gold Key regionally, a nomination for American Visionary Award, and a place in the National Scholastic Art Show where it won a Gold Medal! It is a mixed media of acrylic painting with embroidery. The National award is the highest award anyone has gotten during her Art Teacher’s 20 years at Stryker. Mrs. Laura Moser is very proud and happy for her student. (PHOTO PROVIDED)

Recently, the Black Swamp Art Show was held out at Northwest State Community College and Victoria had a few pieces on display there.

One, called “Pieces of Me” was a large, clear, broken vase with some pieces lying around the base with dates written on them.

When asked about the meaning or significance of this piece, she explained that it was her expression of going through some very difficult situations in her childhood and as a teen.

She wanted that one to show people that the biggest hurtful moments in life can be seen and a measure of healing can happen when we face them.

Breaking the vase, studying what glue was needed to repair it, only partially repairing it and then writing dates on certain pieces that commemorated horrible moments for her, all brought some healing.

“I want people to know that you don’t know what has happened to people or what they have gone through,” she said. “Pieces of Me is probably the deepest meaningful piece I have done.”

“It was like a puzzle. I wanted it to give off the feeling that even though I have had so much happen to me, I am still hanging together.”

She and Mrs. Moser agreed that over this past year, Victoria’s art has been a lot more expressive in symbolism. Before this she stuck to technical training as she was struggling with coping with some circumstances, but now that she is moving into more expressive artwork, she finds she is healing more.

Concerning the glue for “Pieces of Me” they spoke of how even that reminded them of life. Mrs. Moser said, “We all need the right glue,” just like the glass piece needed a specific kind of glue to work.

Also in the Black Swamp display, and now on display in the Art Room Window, is “Succor Blue.” Succor is a very old word for comfort, or assistance and support in times of hardship and distress.

Victoria made a mixed media of fabrics, all in shades of blue, and a teddy bear to show a sweet moment of peace. It draws one in and makes one want to touch it, which is what she said had been her hope as the teddy bear is extremely soft and brings a comfort to the viewer.

This young lady will go far in the art world. After graduation she is planning to check into possibilities to hold classes that will help others find healing through creativity.

She also thinks she might want to move to a large city where there would be more opportunities in the art world. Whatever she does, she is to be congratulated for the accomplishments she has already achieved!