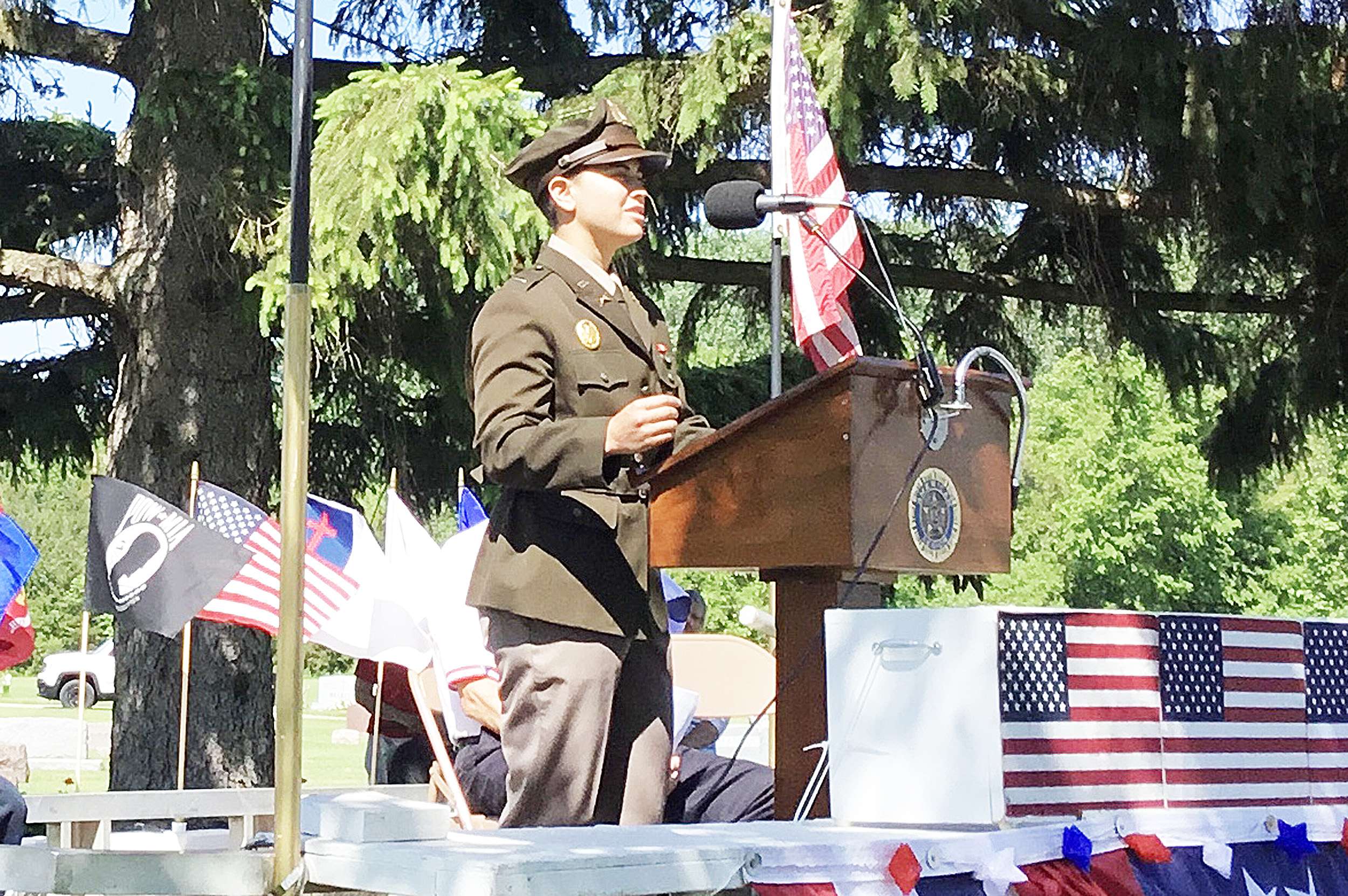 CEREMONY SPEAKER … Proud grandfather Post 60 Commander Rick Wityk sat on the dais as his granddaughter Lt. Jordan Wityk shared her heart with those gathered to honor the fallen on Memorial Day 2022. (PHOTOS BY REBECCA MILLER, STAFF)

One could not have asked for better weather for Memorial Day activities.  In Stryker, Ohio, the HS band joined with the American Legion and Auxiliary to march from Horton St. to the Oakwood Cemetery.

Around 10:30, Post 60 Chaplain Don Carroll welcomed everyone and opened in prayer. Commander Rick Wityk shared that the Stryker Legion has been active for 103 years and even though their group is small now, they are still proud and blessed to represent. Later Commander Wityk placed the POW cover on the chair at the memorial.

Those present heard musical pieces played by the Stryker HS Band led by Mr. Dustin Maroon; the reading of Flanders Field by Brooke Collins; an address given by guest speaker and granddaughter of Commander Rick Wityk, Lt. Morgan Wityk; and a 21 Gun Salute.

The Gettysburg Address was read by Stryker Junior Mattias Cheeseman, in which that immortal line resides, “It is for us the living, rather, to be dedicated here to the unfinished work which they who fought here have thus far so nobly advanced. It is rather for us to be here dedicated to the great task remaining before us — that from these honored dead we take increased devotion to that cause for which they gave the last full measure of devotion — that we here highly resolve that these dead shall not have died in vain — that this nation, under God, shall have a new birth of freedom — and that government of the people, by the people, for the people, shall not perish from the earth.”

The honoring of every branch of the military was witnessed, as local children hung wreaths and placed flags at their markers. All were blessed to recite the Pledge of Allegiance together in a group consisting of every age.

In her speech, Lt. Wityk said that she is proud to serve with all those who are serving all over the world to make it possible for all of us to gather and honor those who have fallen in service.

“I feel extremely proud to be a part of something for which so many have given up their lives,” she said in closing.

Lt. Wityk follows in the footsteps of her grandfather and great grandfather and is happy that she has a couple cousins who also serve. She spoke of what an incredible family the military is for all those who serve.

Both Don Carroll and Rick Wityk were thrilled to have grandsons in the Rifle Squad to perform the 21-gun- salute.

Taps was played by the band and the crowd quietly dispersed to spend this vacation day, having started it honoring those for whom it was made.

MARCHING IN … American Legion Post 60 of Stryker led by Auxiliary member Theresa McColl and accompanied by the Stryker High School Band marched to Oakwood Cemetery on May 30, 2022 to honor the fallen on Memorial Day.