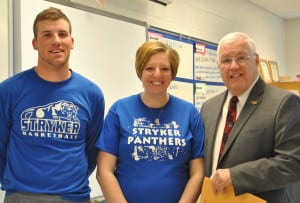 Stryker Schools recently had an unexpected visitor. In a response to an assignment given by Government teacher Katie Jimenez, senior Parker Ruffer chose to write a letter to Ohio High School Athletic Association (OHSAA) Commissioner Daniel Ross. As opposed to simply replying to Parker’s letter, Ross took time out to visit both Ruffer and Jimenez and discuss the letter in person. “It was such an amazing experience for both of us!” expressed Jimenez.

The two part assignment called on students to research an important issue and then address a public official via letter regarding that issue. A stand-out athlete for Stryker Schools, it is not surprising that Ruffer chose to address the issue of drug use in high school and collegiate level sports.
Ruffer’s letter to Ross explains his position and thoughts on the issue:

Dear Commissioner,
Thank you for taking time out of your day to look over this letter. I have been fortunate to be able to compete in high-school sports for four year in both basketball and baseball. I am also been lucky to be able to live my dream and will be competing in Division 1 Baseball next year after my high school career is over. I am just concerned with the lack of drug testing in high school sports today.

I am contacting you on the use of drugs in sports. I feel like you and your colleagues have done a very good job of limiting the use in high school sports. However there is still a 1.1% usage rate in high school/College. That is very good I just believe that it could be down to 0%. I feel like if it was mandated to have to take a random drug test in high school every couple months there would be no more issue of drugs in sports in the state of Ohio. I feel that you guys have a lot of responsibility but if you could take the time just to see if you can make sure that no one is slipping through the cracks.

I ask that you look over the policies and maybe refine them just so that we can make sure that there are no drugs in Ohio sports. Thank you for taking the time to read this it means a lot. I feel like if we can keep drugs out of sports it keeps the integrity of the game and I would not want to lose that in sports. I thank you and lets get drugs out of sports and RESPECT THE GAME!

While Jimenez did send out her own letter prior to Parker’s, asking for officials to please try to take time to respond, it without a doubt came as a shock to find one of those officials walking the halls of Stryker High School so that he could address the pleas in the letter he received. It is also without doubt proves that researching the issues and communicating concerns and ideas can result in responses that were never even imagined.