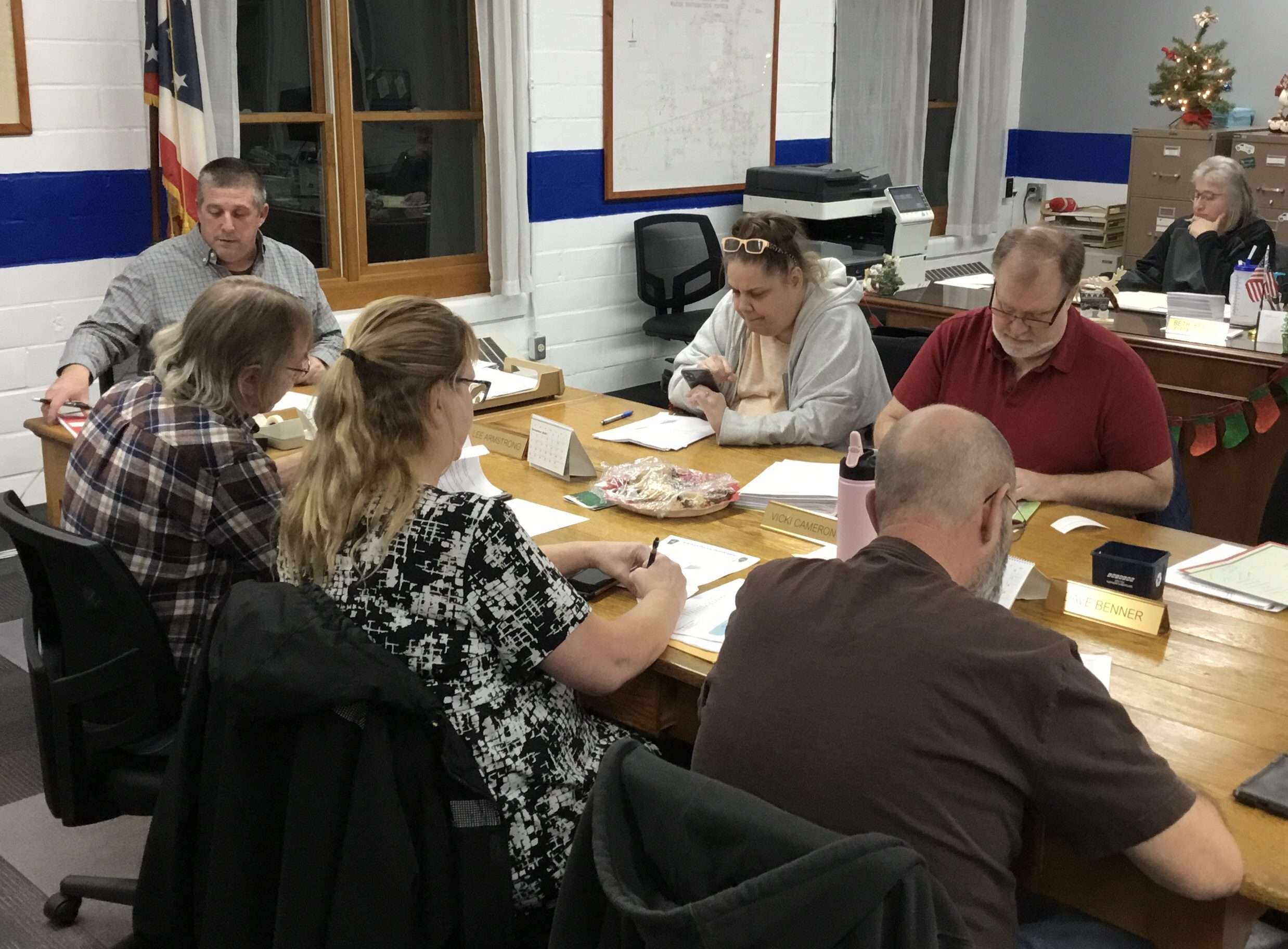 AND THE WINNER IS … Stryker Council members took time to write down their choices for the Christmas Decoration Contest at the December 13, 2021 council meeting. Members had taken time to drive around and view all the entries, making notes to themselves for when it came time to vote. (PHOTO BY REBECCA MILLER, STAFF)

The winners of the Third Annual Stryker Christmas Decoration Contest were chosen and announced at the December 13, 2021 Stryker Village Council meeting. Mayor Joe Beck gave each councilmember three slips of paper to place their votes.

Village Clerk Beth Rediger then counted the votes and gave the results to the mayor to be announced. Third place was given to 803 Shawnee, Second to 107 W. Curtis and FIRST PLACE went to 603 Shawnee.

The meeting began at 6 p.m. with Rediger leading in prayer and Katie Rakes beginning the Pledge of Allegiance. Mayor Beck said that as it was her last time to meet with them as the Solicitor, he had asked Ms. Rakes to be the second ever non-military person to lead the pledge.

As the Village Administrator was not present, Rediger reported for him that the Grant for the Johnson Water Line replacement did come through for the village, so they will be doing that next year.

They plan to also paint the water tower with some of that money. Leaf Pick up is all done, but the compost dumpster will remain out back of the Village Hall until January 1, 2022.

In the Finance Report she informed them that Landbank Packets are available for 314 W. Curtis and 102 Elm St. Anyone interested in placing a bid on either or both of these properties can pick up a packet at the Village hall.

There were a total of seventeen county wide. Bids will be accepted from December 8 through January 12th at noon. They will open the bids on January 13, 2022 at 1 p.m. in the Commissioners’ Office. Minimum bids must be at least $500 and the bidder must indicate their intentions for the land. Council voted to approve the Finance Report.

In legislation council voted to approve the third and final reading of Ordinance 2021-05 An ordinance approving the edition and inclusion of certain ordinances as parts of the various component codes of the codified ordinances of Stryker, Ohio.

Concerning the situation of the need to fill four seats on council, Mayor Beck said he had received five letters of interest in before the deadline. He said it looks like they are waiting until January to determine who fills those seats.

As of January 1, 2022 the council will be down to two seats filled, who are Sean Ingram and Kim Feehan. They can either waive the decision and the Mayor would interview the five who came in before the deadline. There was a sixth that came in a few hours late so it was undetermined if that would be included.

The choice to do the interviews and fill the seats can be determined by Ingram and Feehan as they have thirty days to do so. Either way, it will be decided in January when the seats are empty.

Police Chief Steve Schlosser shared that the Cops with Kids was a great success on December 11. He said the children were so special and he overheard one child saying they wanted to buy vegetables with their money.

One hundred and fifty children were scheduled but they had around one hundred and seventy children show up and each one got $100 to spend on themselves or for others, up to $400 per family.

He also reported that there were 52 calls for service, 6 traffic warnings, 2 adult arrests and 2 juvenile arrests since the last meeting.

Council members each shared with Vicki Cameron and Dave Benner thanking Ms. Rakes for her service to the village of Stryker; Sam Farmer said he just wanted to say, “We live in a great community. We really do.”; Sean Ingram wished everyone a Merry Christmas; and Kim Feehan said she was just happy to be there (as she has missed due to health issues).

Katie Rakes referred back to her letter of resignation but also said she wanted to thank everyone for letting her serve Stryker.

She said she is so proud that her family has a history in Stryker and she has enjoyed serving there. “I was such a new attorney when you brought me on and I have learned a lot, and I hope I have contributed a lot. Thank you so much for the opportunity.” She also said she is available in the future if they need her for anything specific.

Mayor Beck said that she came highly recommended by her peers and that when he and Councilman Terry Wieland were researching about her, it “just felt right.” He thanked her for “the time and effort she has put in with Stryker.”