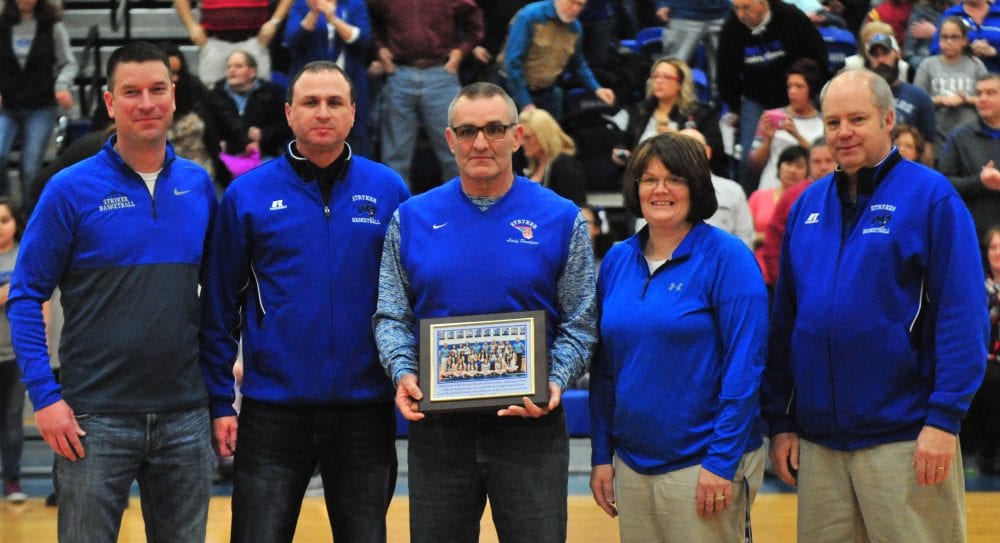 On December 1, 2016, Stryker Varsity Girls Basketball Coach Steve Brown reached a milestone that most coaches only dream of. For on that date in a contest against Montpelier, Brown notched his 300th win after his Lady Panthers downed the Lady Locos.

During halftime of the Stryker Varsity Boys Basketball Game against Pettisville on February 3, 2017, the administration of Stryker Local Schools recognized Coach Brown for his accomplishment. In front of a gym filled close to capacity, the community of Stryker, and all others in attendance, which included well over 50 current and former players assembled to honor their beloved coach.

For the past 19 years, Brown has led the Lady Panthers. In that time he has amassed a record that currently stands at 280-148. Add to that his 32-53 record in his tenure as boys coach at Hilltop from 1994-1998, and Brown currently sports an overall mark of 312-201, in his 23 years of coaching. The tenure has also resulted in 8 Buckeye Border Conference Championships, 9 Sectional Titles, 4 District Trophies, and Stryker has just missed advancing to State twice finishing the season as Regional Runners-up in 2004 and 2007.

There are several factors that must come in to play in order for any coach to have the success that Brown has experienced. The coach was quick to share the credit with others. When asked what has made him so successful Brown shared, “Hard work, great players and great assistant coaches. I have been blessed to work with a lot of great players and assistant coaches along the way. I also have developed friendships with a lot of opposing coaches. I have always tried to do things the right way with the program, and most of all have a wife and family who have supported me and have sacrificed most of their lives to my coaching career.”

Brown however doesn’t give himself enough of the credit. Over the course of his career, Brown has had the admirable ability to get the most out of his players. He has done this through several different methods utilized in his coaching. His efforts haven’t gone unnoticed by his peers either.

Pettisville Girls Coach and Stryker graduate Jason Waldvogel describes his relationship with the coach. “I have known Coach Brown for years dating back to elementary school and watching him play basketball. If I had to sum him up in one word, it would be “competitor”. I enjoy games against his teams because I know they are always very well prepared and they will play hard. He does a tremendous job in getting the most out of his kids and they always understand the game well. I know from having three nieces play for him that he not only coaches the basketball player, but cares for his players and helps them to succeed in the other aspects of life. I have always looked to Coach Brown as a mentor and have the utmost respect for him.”

Current Bryan Coach, Todd Grosjean explained his relationship with Brown in terms of basketball and beyond. “I have coached against Coach Brown for many years and he one of the best coaches in terms of getting the most out of his kids. Steve has always found ways to get his players to accept their roles. And even when he wasn’t blessed with the most talented group of kids, he found ways to make them successful and help them to compete at a very high level. Coach Brown has had some outstanding teams in Stryker and has established a program that expects to compete and be successful every year. Their consistency as a program is a credit to Coach Brown and his staff. Not only is he a great coach, he is also a great friend, and a man of great character.”

When asked to describe his coaching style in one word Brown replied, “Intense!” Anyone who has witnessed Brown on the sidelines most assuredly would concur. This intensity is not limited to games however, and is possibly the key to Brown success. In fact, whether asking the question of how intense practices are to past or current players the answer was always the same. Practice was as intense, if not more so than the games. Several players noted one on Brown’s favorite lines, “If you don’t do it in practice, you won’t do it in games”. Former player Molly Boetz took the intensity level of practice one step further, “Practices were just as intense or maybe even more than games because there were no refs in practice!”

Although many of the present and former players also agreed with Brown’s self-assessment, there was a common theme of a few other adjectives use to describe the coach. Current Lady Panther junior, Haley Doehrmann, and former players Kamilla Ruffer Houk and Brooke Ruffer all described Brown as “Passionate”. Past player Jamie Ruffer Woolace as well as senior Taylor Haines used the word “Dedicated” in their evaluation. Haines added “Dependable” as well. Former player, and current assistant coach, Conner Varner and sophomore Emma Grime used “Caring” to describe their mentor. In fact, in one way or another, each player used “Caring” to describe Brown’s relationship with his players.

Over the course of Brown’s career defense has been the cornerstone of Stryker Girls Basketball. When asked if this was an accurate assessment Brown shared, “We’ve been successful in large part due to our defensive intensity. Defense is something that teams can bring every night no matter what is happening offensively”.

Brown isn’t afraid to demonstrate this belief to his players. As both past and current players shared it is not uncommon at practice for Brown to throw himself on the floor, take a charge, or dive for a loose ball. He truly practices what he preaches!

Obviously this philosophy is forever engrained into the players. Current players Haines, Doehrmann and Grime shared, “He always says ‘Defense wins games’ so we believe if we can play defense then offense should come easier.” Molly Boetz concurred, “We practiced defense was our best offense.”

One characteristic of Brown used by his players to describe him is something that may not be obvious to the casual observer of Brown’s coaching. “He has a great sense of humor, and knows just when to joke or have fun, and when to be serious”, shared Jamie Ruffer Woolace. Brooke Ruffer agreed. “I remember one time before a big game, probably one with Pettisville, when Coach came into the locker room dancing to the song “Good Feeling” by the Black Eyed Peas. He and the other coaches did that to loosen us up and help us relax before the game. It was pretty hilarious!”

While the record itself is quite impressive, it pales in comparison to the life-long effect Brown has on the student-athletes he has coached.

This sentiment is echoed by every current and former player who was interviewed. To a player, the fact that Brown cares about them as people first, and players second, is more important than any basketball skill he taught them. To many of the players Brown was not just a coach, but also a father-figure as well as a role model for them and he isn’t afraid to show that in more ways than one.

Emma Grime shared, “He has talks with us that really mean a lot. Not only about basketball, but about life.”

Haley Doehrmann explained the lasting impression Brown has provided her. “Coach Brown is a man of God, which brings me to have an unbelievable amount of respect for him.”

Conner Varner provided this visual. “If you have ever been to one of our awards banquets you would understand. I can’t remember an awards banquet that he didn’t choke up, get emotional or shed a few tears at because he cares SO much about every single one of his players. A lot of people see how good of a basketball coach he is, but not everyone gets to see how could of a LIFE coach he is. He cares about every single one of his players, and makes sure that they all know that and never have to question that. I just really want people to know that Coach Brown is a phenomenal coach, but to us who have been lucky enough to go through his program or coach with him, he is way more than just a basketball coach!”

Kamilla Ruffer Houk added, “He cares for his players outside of the gym. Even though I played for him over ten years ago, he still shows that he cares for me just the same, and will always make time to talk when I see him. Coach Brown was always telling us to take pride of the words Lady Panther on our jersey. He said we weren’t playing for ourselves, but for our school! I still have just as much respect for him now as I did then. He still welcomes all of us back into the gym anytime. He will always be known as Coach to me!” What greater praise can a coach get than that?

Coach Brown makes it very clear that although winning is important, it is the life lessons and relationships that matter most. This is obvious by the number of people who were in attendance to honor him at his recognition. From the tears shed, hugs given, and general outpouring of love and respect shown, the impact Coach Steve Brown has had on the lives of both former and current players, as well as the Stryker community in general is obvious. He’s not afraid to show his emotions or be genuine in all that he does. Well done Coach Brown, well done!