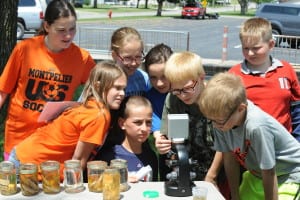 Montpelier’s Memorial Park found itself drenched in elementary students on Thursday, May 28.

That day signified Montpelier’s Water Fun Day, an event designed to educate as well as entertain children about water and the wide variety of topics encompassed in the admittedly broad subject. The young students were accompanied by parental chaperons as they ventured from station to station, listening to professionals in different water-related fields explain to them the importance of the liquid. Exciting games and interesting displays also accompanied these presentations, assuring the presenters the attention of their youthful audience.

Jim Watson, owner of Watson Well Drilling, manned one of these stations alongside his son, Rob Watson. Jim jumped at the opportunity to reach out to kids about pumping water from the ground.

That fun was centered around showing the children how water was extracted before the days of facets and running water within the home. It was Jim’s goal to make them appreciate all of the luxuries most people take for granted.

“A stool that actually flushes,” Jim gave as an example, “It doesn’t get any better than that.”

In order to illustrate how much more difficult it was to procure water before the invention of indoor plumbing, Jim had each group of kids divide into two smaller factions.

Those teams would then be timed, as one member would pump water into a bucket, then begin a chain of water dumping from bucket to bucket, as the last in line was charged with placing the water through the narrow mouth of an enclosed plastic barrel. This provided not only a great deal of enjoyment for the kids, but also a great deal of work.

At another station, Ohio Environmental Protection Agency (EPA) representatives Jeremy Scoles and Brent Goetz taught those to pass through their location about the water cycle. This topic led to the discussion of water conservation and pollution.

“How we can help prevent it,” Scoles said of the latter issue.

Methods for dealing with trash, such as landfills and open burning were also mentioned by the duo from the EPA. Of course, there is another, more environmentally friendly way with which both water and trash can be dealt.

“We talk about recycling,” Goetz recalled of their program for the day.

Even the Ohio Sea Grant made its way to Memorial Park for Water Fun Day. Tory Gabriel spoke on behalf of the organization, educating the children on the Great Lakes, with an emphasis on relatively nearby Lake Erie. While speaking on the wild life present within the waters of the lake, he made a surprising claim.

“We actually have more fish in Lake Erie than every other Great Lake combined.”

Gabriel attributed this to the shallowness of Erie, which has the least depth of the Great Lakes. Because of this, it takes less energy to heat it, providing the ideal environment for many breeds of fish.

“Where would you rather live,” Gabriel asked his audience rhetorically.

He also touched on the subject of invasive species, a rather large problem for Lake Erie. The body of water holds more than 190 breeds of aquatic life not native to its warm depths, making it a more difficult place for several of its natural inhabitants to live. Gabriel gave multiple tips on how to ensure that one doesn’t add to this growing complication, whether it be Lake Erie or elsewhere, including to clean, drain, and dry any fishing equipment they may be taking from another water source to Erie.

But there was also advice applicable to everyone, fishermen or not.

These were but a few of the stops made by the students of Montpelier elementary as each grade level took turns drinking in the joys of Water Fun Day.