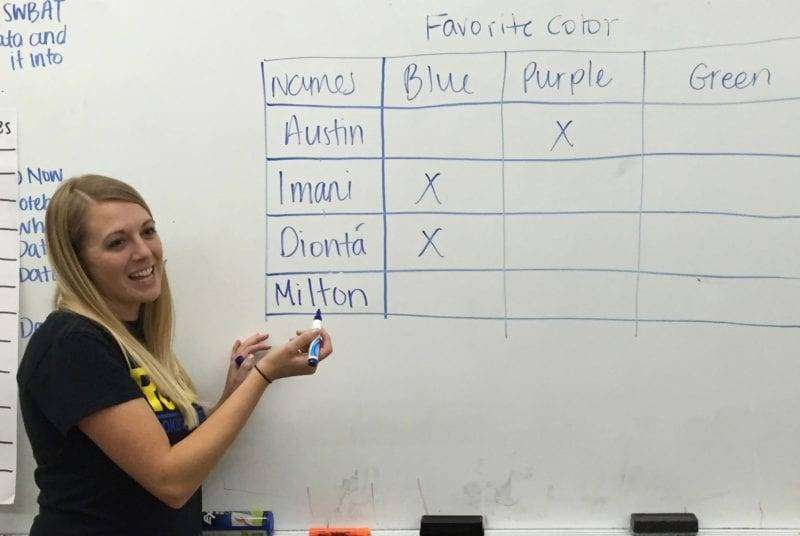 For most graduated seniors of a small town high school, going off to college often places them in much larger populated areas facing far more challenging and often intimidating circumstances than they have ever known. It’s a big step.

For a select few, once they earn their degree, they take jobs in the largest cities in America and work in a world far away from family, friends and the intimate protective cocoon in which they were raised. It’s a quantum leap.

After earning a degree in biology from Ohio State University, 2009 Swanton High School graduate Paige Onweller, took that leap. Prior to leaving OSU, Paige, the daughter of Fulton County Engineer Frank Onweller and his wife Teri, an insurance agent by trade, applied to Teach For America, a non-profit organization that recruits recent college graduates to teach for two years in low-income urban or rural areas with underfunded schools. Her parents, both believing she would be entering the medical field, were blind sided by the decision. “My dad just sat there and didn’t say a word for 30 minutes when I told them,” Paige remembered.

After successfully going through an intensive five stage application process, Paige submitted a list of ten regions where she preferred to be placed and was assigned to her second choice, the largest urban setting in the United States, New York City, with a population of approximately 8.5 million.

A summer long training program was next for Paige followed by an interview in New York and she was quickly hired by ROADS Brooklyn High School. ROADS is an acronym which stands for Reinventing Options for Adolescents Deserving Success and essentially is a charter school, drawing its students from several surrounding communities including Flatbush and Bedford-Stuyvesant.

Just in its second year of existence when she was hired, ROADS was uniquely designed to accept students that were of older age but under credited, giving preference to those that were in foster care, homeless, or had been through the juvenile court system.

Also, in the New York City Department of Education, students will “age out” when they reach 21, but at ROADS they can remain as long as they are accumulating credits. Needless to say, Paige quickly found that a typical day as a teacher at ROADS resembled nothing like any day she had ever experienced as a student at Swanton. It presented a very different and difficult list of challenges.

“At Swanton, if you were whispering while a teacher was talking it was a big deal,” Paige related. “We have bigger issues at ROADS. There is a lot of outside baggage that comes in, like gang activity. I had a student last year that was shot and killed in the middle of the year. My job is to teach biology but how can I tell them to turn that stuff off. I think I’ve spent more time emotionally supporting these kids than teaching them. They have a lot of other things going on in their lives.”

In addition to teaching under such adverse conditions Paige has also had to adapt from living most of her life in quiet community of under 4000 people to an intensely dynamic and dense community of over eight million with a lot of her mobility dictated by New York City’s public transportation system.

“I was here once in high school and thought I would never want to live here but I love it,” she said. “There is so much to do, so much culture and diversity and the food is so good.”

In her “spare” time she acquired a Master’s degree in education from Fordham University while attending night classes at their Lincoln Center campus in Manhattan.

When Paige completed her two year obligation the administrators at ROADS were so impressed by her performance and impact on the school they asked her to return for a third year. She agreed but will be moving on when the school year ends in the Spring of 2016.

Paige has decided to return to the area and enter a 30 month program, possibly through the University of Toledo Medical College, to become a Physician’s Assistant. She does, however, look at her experience in Brooklyn to be one of the best things she ever could have done.

“I believe doing this has prepared me to do anything else I want to do in my life,” Paige said. In addition to having the courage to accomplish what she has so early in her life Paige has become a Swanton success story.

Bill may be reached at publisher@thevillagereporter.com